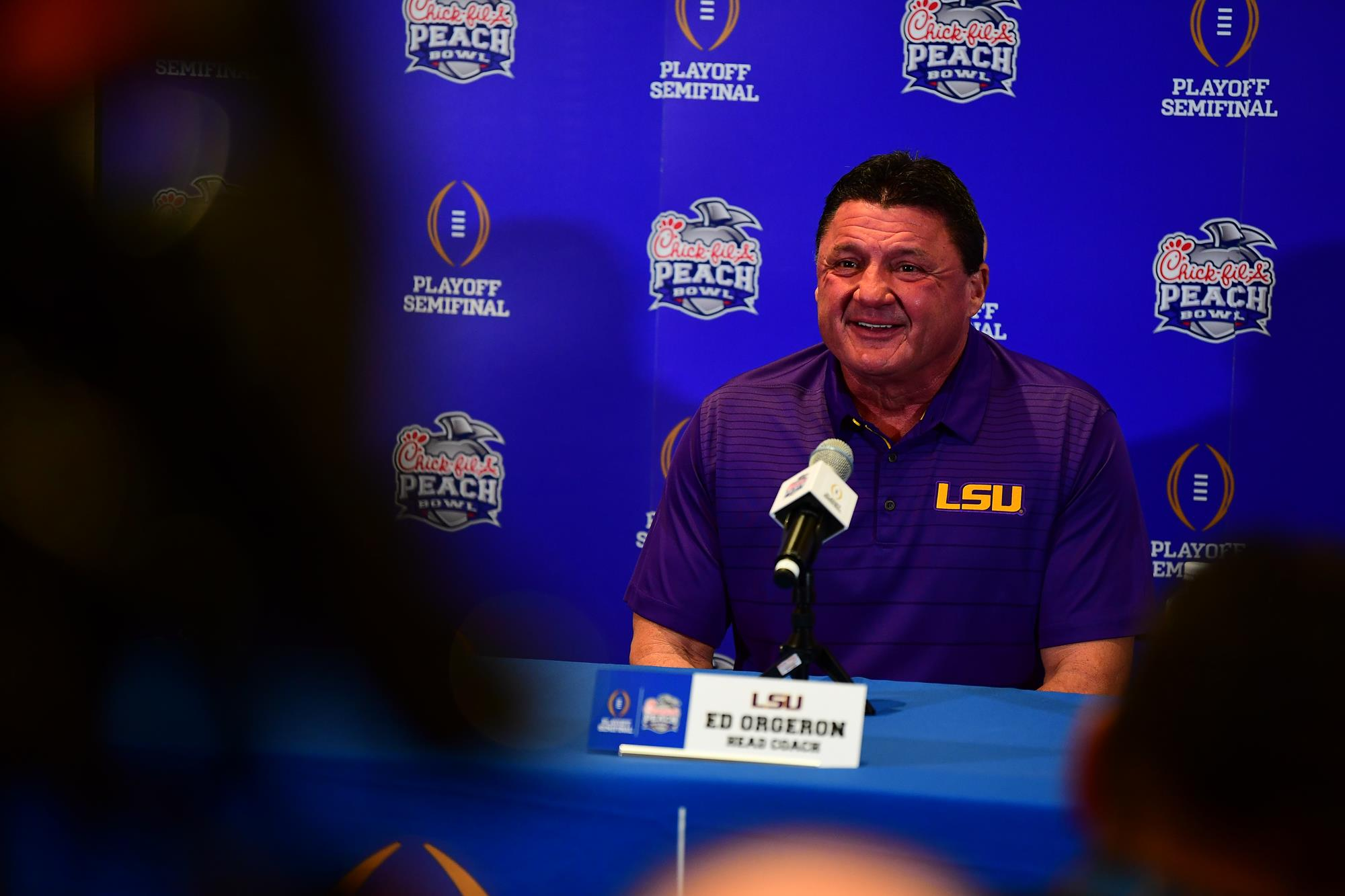 ATLANTA – LSU held its first workout at the site of Saturday’s CFP National Semifinal contest as the top-ranked Tigers went through a typical “Tell the Truth Monday” here today at Mercedes-Benz Stadium.

LSU and fourth-ranked Oklahoma meet on Saturday afternoonin Mercedes-Benz Stadium with the winner advancing to the CFP National Championship game on January 13 in New Orleans. Kickoff on Saturday between the Tigers and Sooners is set for 3 p.m. CT and will be televised by ESPN.

LSU enters the contest riding a 14-game winning streak and the champions of the Southeastern Conference bring a 13-0 mark into the game. The Sooners, champions of the Big 12, are 12-1 overall. Saturday’s game will be just the third meeting between LSU and Oklahoma with the series tied at 1-1. LSU won the last meeting between the teams, 21-14, to claim the 2003 BCS National Championship.

“First of all, it’s an honor to be playing in the Chick-fil-A Peach Bowl,” LSU head coach Ed Orgeron said on Monday at his post-practice press conference. “These guys have been phenomenal, accommodations, the welcome, the hospitality. The food obviously has been phenomenal, practice facilities, hotel. Everything’s been great.

“We had a great Monday practice, we practiced in the Dome. There’s a different feeling about this team this week. This is a playoff game for us. You can feel the intensity ratcheting up.

“Focusing on the details was very good today. We’re excited to be here, very pleased with our coaching staff, the way they’re working. We have our wives and have our family here, but everybody knows it’s a playoff game and we’re coming to win it.”

LSU spent Monday evening taking part in a team event with Oklahoma at the College Football Hall of Fame. Both teams toured the facility, which had displays of Heisman Trophy winner Joe Burrow and Jim Thorpe Award winner Grant Delpit.

The College Football Hall of Fame also has an area dedicated to LSU’s No. 18 jersey – featuring Matt Mauck’s jersey from the 2003 season – as well as strength and conditioning coach Tommy Moffitt.

The Tigers, making their first playoff appearance since the new format begin in 2014, go into the contest leading the nation in total offense with 554.3 yard per game. The Tigers are No. 2 nationally in passing offense (386.8) and No. 3 in scoring offense (47.8).

Heisman Trophy quarterback Joe Burrow has re-written the LSU record books this year, setting school marks for passing yards (4,715), passing TDs (48) and completions (342). His 77.9 completion in on pace to break the NCAA mark of 76.7 set by Colt McCoy of Texas in 2008.

LSU, which will practice all week in Mercedes-Benz Stadium, has a workout in the dome at 11:40 a.m. on Tuesday. LSU starts the day on Tuesday with offensive coordinator Steve Ensminger and defensive coordinator Dave Aranda, along with three players on both sides of the ball, meeting with the media.

“We are excited to be here,” Orgeron said. “We’re in the same hotel (as the SEC Championship Game). You go into the dome today and you see College Football Playoffs Semifinals. The magnitude of the football game, everybody’s awareness and alertness is heightening. I don’t think there’s any anxiety or sense of confidence, but a sense of knowing we got to go get the job done.