LSU Radio to be Included in ESPN's CFP 'Megacast' 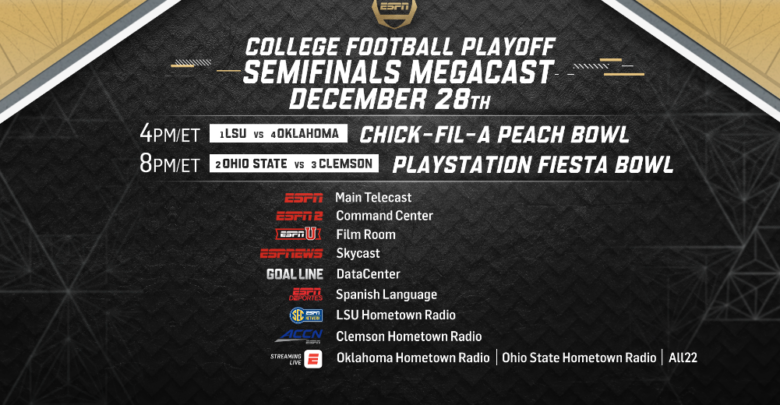 SEC Nation and SEC Now will continue their expansive coverage of SEC football, including several live editions over the days leading up to kickoff from the SEC Network set at the College Football Playoff Semifinal at the Chick-fil-A Peach Bowl. The audio call will be synced up to game action, with Finebaum and McElroy chatting with Finebaum callers during halftime. A full preview of MegaCast viewing options is available here with complete studio coverage of the CFP and New Year’s Six here.

SEC Now kicks off the conversation on Thursday, Dec. 26 at 8:30 a.m. ET with coverage of LSU and Oklahoma’s media day from the College Football Playoff Semifinal at the Chick-fil-A Peach Bowl. Dari Nowkhah, Marcus Spears and Tim Tebow will be on the desk Thursday morning, and Nowkhah will be joined by Gene Chizik for Friday morning’s SEC Now featuring the Head Coaches Press Conference at 9:30 a.m. Laura Rutledge will anchor Friday evening’s SEC Now from the sidelines of Mercedes-Benz Stadium, joined by Spears, Chizik, Tebow and Greg McElroy at 7 p.m.

The Saturday post-game edition of SEC Now from Atlanta will follow the conclusion of the first College Football Playoff Semifinal, as Nowkhah, Spears, Tebow and Chizik will breakdown all the action from Atlanta. Throughout the coming weeks, SEC Now will also highlight all nine SEC squads playing in the postseason nearly every night on SEC Network.

Along with SEC Network’s presence in Atlanta, the network will have a stadium set in Orlando for full New Year’s Day bowl coverage on Wednesday, Jan. 1 from the field at the Vrbo Citrus Bowl. Chizik will be on site with Rutledge, Finebaum and Spears from Orlando, while Tebow will join the SEC Nation Presented by Academy Sports + Outdoors crew on Wednesday from the Allstate Sugar Bowl in New Orleans.

The Paul Finebaum Show will originate from the College Football Hall of Fame on Thursday and Friday, Dec. 26 and 27 from 3-7 p.m. A rotating cast of college football analysts and special guests will join Paul in Atlanta.

SEC Network social and digital will provide on-site, behind-the-scenes coverage from the College Football Playoff Semifinal at the Chick-fil-A Peach Bowl. Fans can follow along with SEC Network on Twitter, Instagram and Facebook, as well as at SECNetwork.com.

About SEC Network
The Southeastern Conference and ESPN launched SEC Network on August 14, 2014. The network televises over 45 SEC football games, 100 men’s basketball games, 60 women’s basketball games, 75 baseball games, and other events from across the SEC’s 21 sports annually. Programming includes in-depth analysis and storytelling in studio shows such as SEC Nation, Thinking Out Loud and Rally Cap, daily news and information with SEC Now, original content such as TrueSouth, SEC Storied and SEC Inside, and more. Hundreds of additional live events are available for streaming exclusively on SEC Network’s digital companion, SEC Network+, via the ESPN App and SECNetwork.com. The network is also available in more than 50 countries throughout Europe, Middle East and Africa via ESPN Player, ESPN’s sports streaming service in the region.