28 Fall Graduates Honored at ‘The Tribute’ 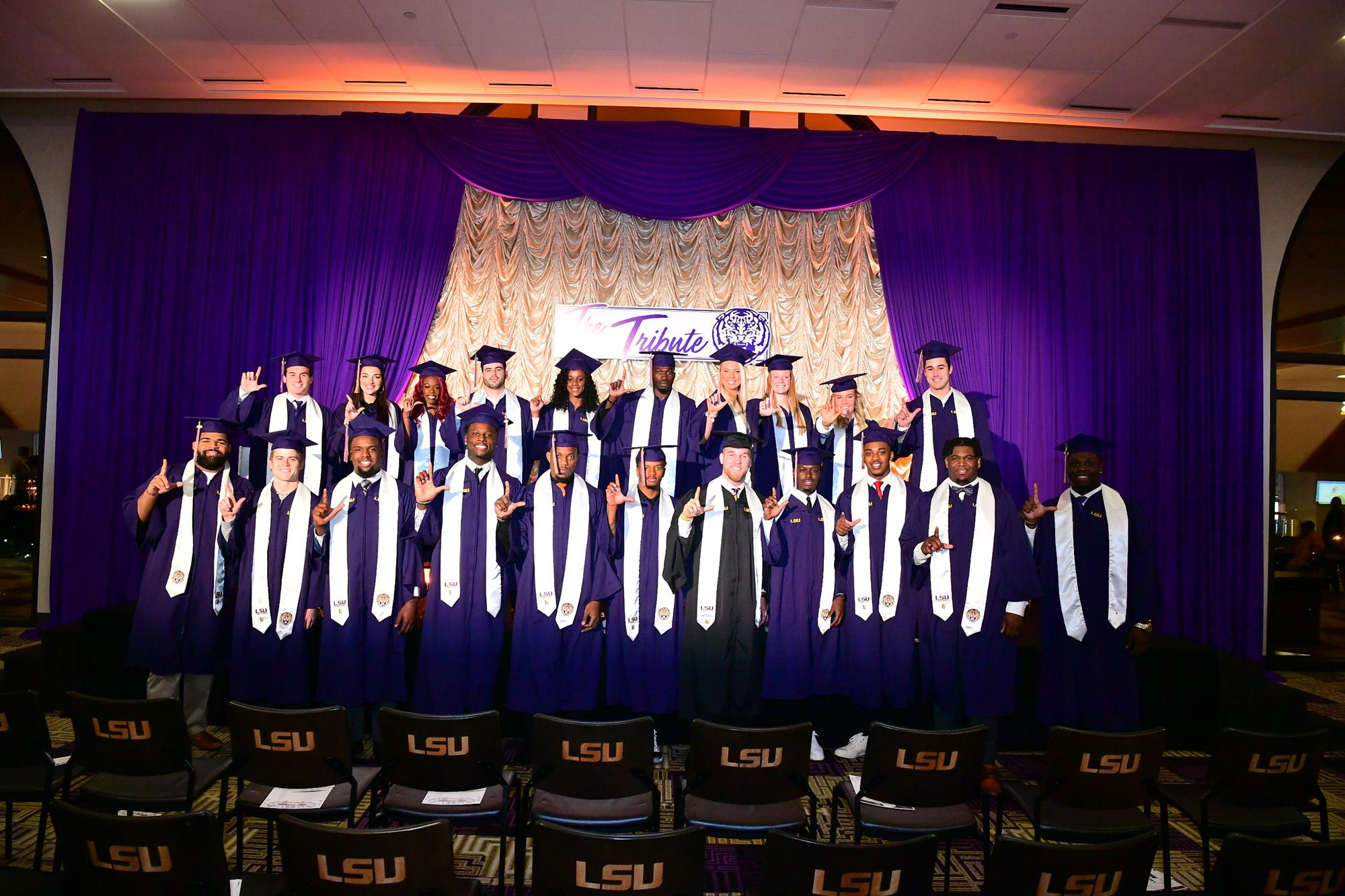 BATON ROUGE – Twenty-eight LSU student-athletes that are set to graduate on Friday were honored at The Tribute on Thursday night at the South Stadium Club inside Tiger Stadium.

The event honors and recognizes all the things that the graduating student-athletes have accomplished in the classroom and in their respective sports during their time in Baton Rouge.

“It’s a special day for all of us” said LSU Directory of Athletics Scott Woodward. “These young men and women are so special, so smart and so talented in what they do. I see a lot of them almost every day, and I couldn’t be happier for what they have accomplished.

“They are going to go forward and do great things. They have done everything that we have asked. When we recruited them, we asked them to be a great student, compete at the highest level and do the right thing. These young men and women make us proud, and we thank them for allowing us to have these special times and special years. I hope we have given them something that is going to take them a long way. Geaux Tigers.”

All the graduating student-athletes received a LSU stole that notates they are a student-athlete. The Stole is presented to commemorate all that they have accomplished during their careers – both as a student and an athlete.

“The tradition that they have created, wearing the Purple and Gold, will forever be part of the LSU legacy,” said Executive Director of the L Club Kristen Cain. “The pin at the bottom of the stole is the first mark for them of becoming an L Club member and a Tiger for life.”

Off the field, Ferguson has been nominated for the AFCA Good Works Team twice and was a semifinalist for the 2019 Campbell Trophy. Ferguson earned a spot on the 2019 CoSIDA Academic All-District team. Ferguson graduated with a Bachelor’s degree in marketing in just three years.

“First I would like to thank the athletic administration for giving me the opportunity to address my fellow student-athletes this evening,” said Ferguson. “We’ve been on a journey together throughout time here in Baton Rouge and that journey has looked different for each one of us.

“We’ve all traveled a long road to be here. What we all have in common is our determination, grit and whatever-it-takes mentality; to work hard for our love and gratitude for this University. The lessons that we’ve learned here in Baton Rouge will carry with us to the next level. LSU has prepared us incredibly well for whatever comes next. We will always be welcomed back to Baton rouge, the place we called home in LSU.”

Twenty-eight athletes from 10 different sports were honored Thursday evening. Football has 13 graduates, while swimming & diving has four and track & field has three. Men’s tennis has two, while baseball, women’s soccer, women’s golf, softball, cross country and women’s tennis have one.