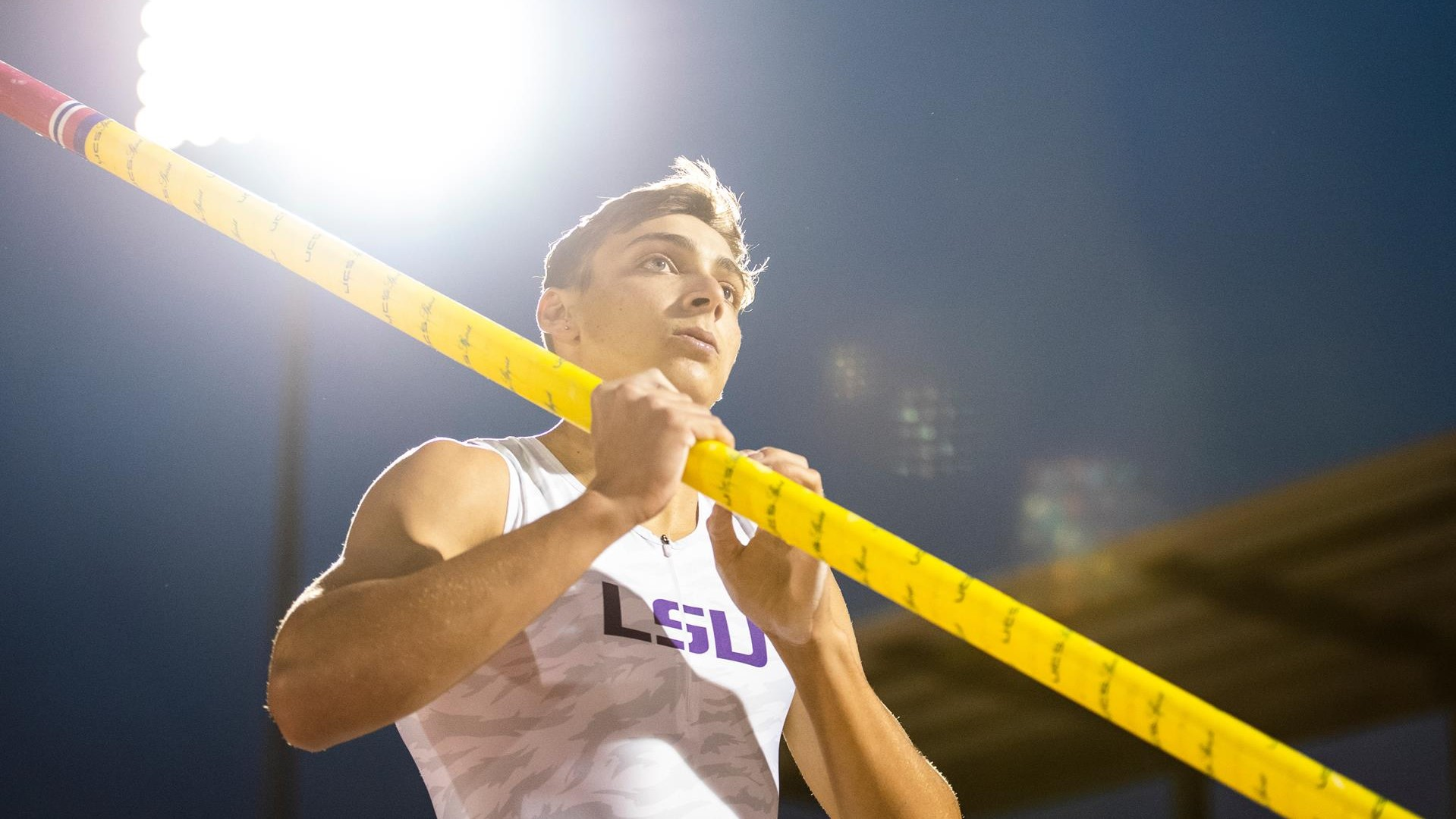 Baton Rouge, La. – Mondo Duplantis is one of three finalists for the 2019 Bowerman that will be awarded on Thursday (Dec. 19) in Orlando, Fla., at the Grande Lakes Resort.

Duplantis set the indoor and outdoor collegiate records in the pole vault in his lone season with the LSU track and field program. He won the NCAA indoor title in the pole vault, swept the event at the indoor/outdoor SEC meets and registered four of the top-10 highest vaults in collegiate outdoor history. He became the first collegian ever to clear six meters, or 19′ 8.25″, with his SEC winning jump of 19′ 8.25″ at the conference outdoor meet. His indoor collegiate record of 19′ 5″ was set at the SEC indoor championships. Mondo is a finalist alongside Florida’s Grant Holloway and Texas Tech’s Divine Oduduru.

Mondo made his collegiate debut near the end of January at the Razorback Invitational in Fayetteville, Arkansas. In his first collegiate meet, he cleared a bar of 5.83 meters (19′ 1.50″) to register the third-best clearance in collegiate history and set the LSU school record.

Revisit his first collegiate competition in the Purple and Gold.

The high-flying freshman was back at it a week later on Feb. 1 at the Carl Maddox Fieldhouse in Baton Rouge. The native of Lafayette, La., cleared 5.87 meters (19′ 3″) to move himself into the No. 2 spot on the NCAA all-time list.

History was made on the evening of Feb. 22 in Fayetteville at the SEC Championships. Entering the meet, Mondo had attempted to break the collegiate record nine times, all of which resulted in misses. That changed on the first night of the SEC indoor meet as he cleared the collegiate record and Swedish indoor record with a clearance of 19′ 8.25″ on the way to his first SEC title.

He closed out his only indoor collegiate season with an NCAA title at the NCAA Championships in Birmingham, Ala., on March 8. He went up and over a bar of 5.83 meters (19′ 1.50″) to become LSU’s second national champion in the event joining the likes of Russ Buller (2000). Mondo finished the season with four of the top nine pole vault clearance in indoor collegiate history.

The world-class vaulter got his outdoor season started with a win at the LSU Alumni Gold (April 20) before he shot to No. 2 in collegiate history outdoors with a clearance of 5.94 meters (19′ 5.75″) at the LSU Invitational on April 27. It was also an LSU school record and Bernie Moore Track Stadium facility record.

May 11th in Fayetteville, Ark., set the scene for a historic day for the LSU Tigers. Mondo rose up and above 6.00 meters (19′ 8.25″) to set the outdoor collegiate record while leading the men’s squad to its first SEC outdoor team title since 1990. With a field of 21 pole vaulters, Mondo had to wait over two hours to take his first attempt, but that didn’t affect him one bit. He cleared three bars to secure the SEC individual title before he moved the bar to six meters. He missed the first two tries, but his third attempt was golden and put the finishing touches on an excellent performance. Less than 45 minutes after he won the individual title, he was celebrating with his team as the 2019 SEC Champs.

Mondo suffered his only defeat of his collegiate career in his LSU finale as he took second place at the NCAA Championships with a clearance of 5.80 meters (19′ 0.25″) behind Chris Nilsen (5.95 meters). His eight points helped the LSU men to a seventh-place team finish, marking the 22nd-straight year that the LSU men have finished in the top 10 at the NCAA outdoor meet. On June 10, Mondo announced he was going pro and signed a contract with PUMA.

He picked up his first Diamond League win as a professional on July 1 with a mark of 5.93 meters (19′ 5.50″) at the Prefontaine Classic in Stanford, Calif. He closed out his 2019 campaign with a silver medal at the IAAF World Championships in Doha with a clearance of 5.97 meters (19′ 7″).