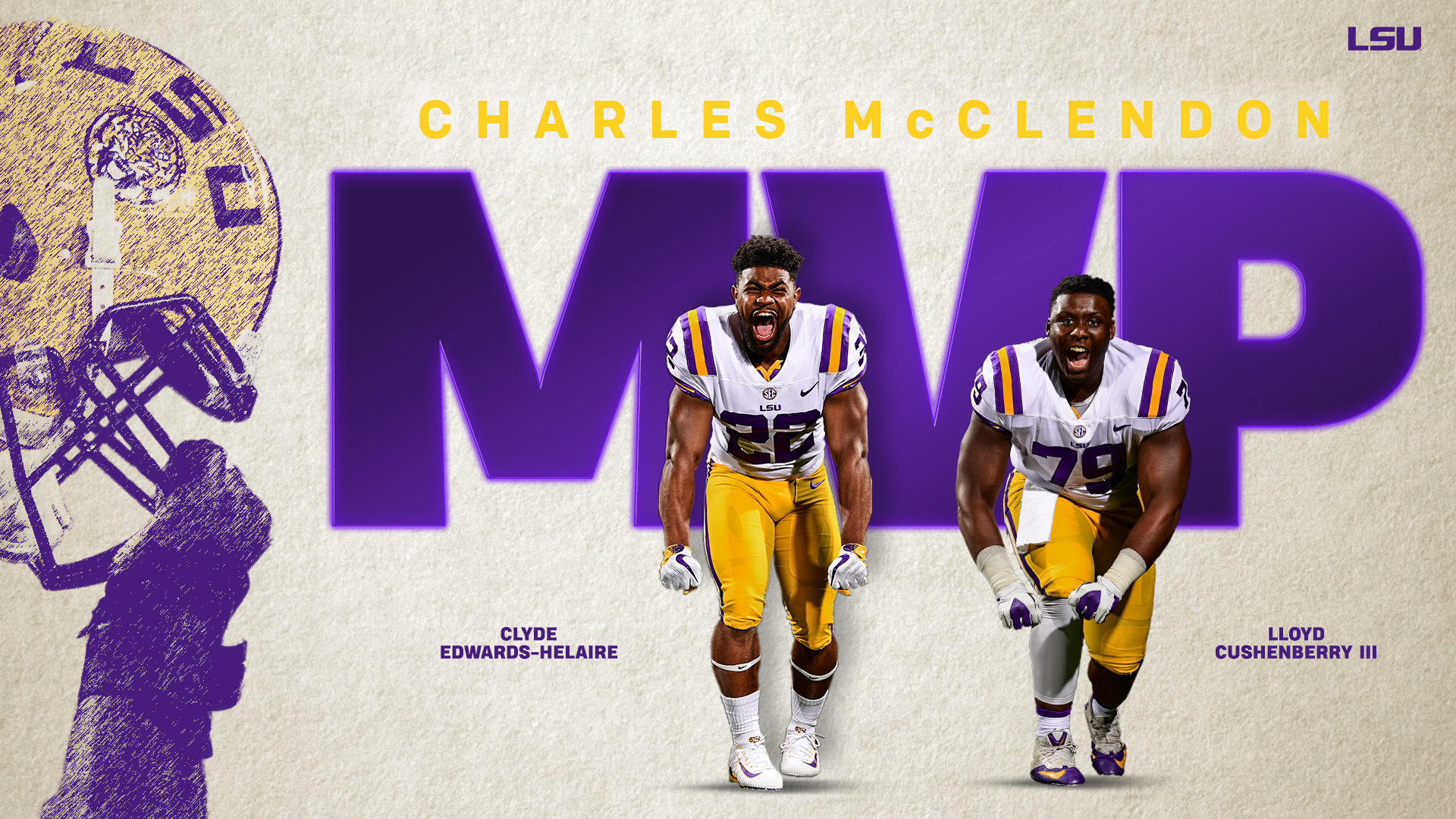 BATON ROUGE – Center Lloyd Cushenberry III and running back Clyde Edwards-Helaire have been named the winners of the Charles McClendon Award, which is presented annually to the most valuable player on the LSU football team, head coach Ed Orgeron announced at the team’s award ceremony on Monday night at the Union Theatre on campus.

Edwards-Helaire has rushed for 1,290 yards and a league-best 16 touchdowns in 2019. Cushenberry III is the Tigers’ starting center for an offense that has broken many records, including the first team in SEC history with a 4,000-yard passer, 1,000 yard rusher and two, 1,000 yard receivers.

Chase and Jefferson have combined to be the most dangerous receivers in the nation. Chase was awarded the Biletnikoff as the top receiver in college football and his team-leading 18 touchdowns is tied for the SEC record.

JaCoby Stevens, Patrick Queen and Derek Stingley Jr. were named the Percy E. Roberts Outstanding Defensive Players of the Year. Stevens was named the SEC Defensive Player of the Week three times and was named to the All-SEC team. Queen is third on the team in tackles with 69 and owns eight tackles for loss. Stingley Jr. is an All-American as a freshman and led the SEC in interceptions with six and passes defended with 21.

Fergus was the winner of the Outstanding Special Teams Award.

The following is a complete list of LSU’s 2019 award winners announced on Monday night:

Alvin Roy Award
Give to the player(s) who has shown the most dedication to the individual and team goals of the Tiger’s year-round strength and conditioning program.
2019 Recipients: Clyde Edwards-Helaire; Lloyd Cushenberry III

Dr. Charles E. Coates, Academic Award
Presented to the senior who has demonstrated the highest commitment to scholarly work in the combination with excellence on the field.
2019 Recipient: Blake Ferguson

Outstanding Special Teams Award
Presented to the player who accumulates the most points over the season through his effectiveness on special teams play.
2019 Recipients: Blake Ferguson, Racey McMath

Jeff Boss Unsung Hero Award
Presented by the Bengal Belles goes to player who have made significant contributions to the success of the team and received the least recognition for it.
2019 Recipients: Derrick Dillon; Damien Lewis; Breiden Fehoko; Glen Logan; Terrace Marshall Jr., Thaddeus Moss

Butch Duhe Award
Recipient is one whose character and contributions to the LSU Football team most personify the idea of unselfishness, dependability and commitment to the team.
2019 Recipients: Blake Ferguson; Adrian Magee; Badara Traore; Stephen Sullivan; Jacob Phillips