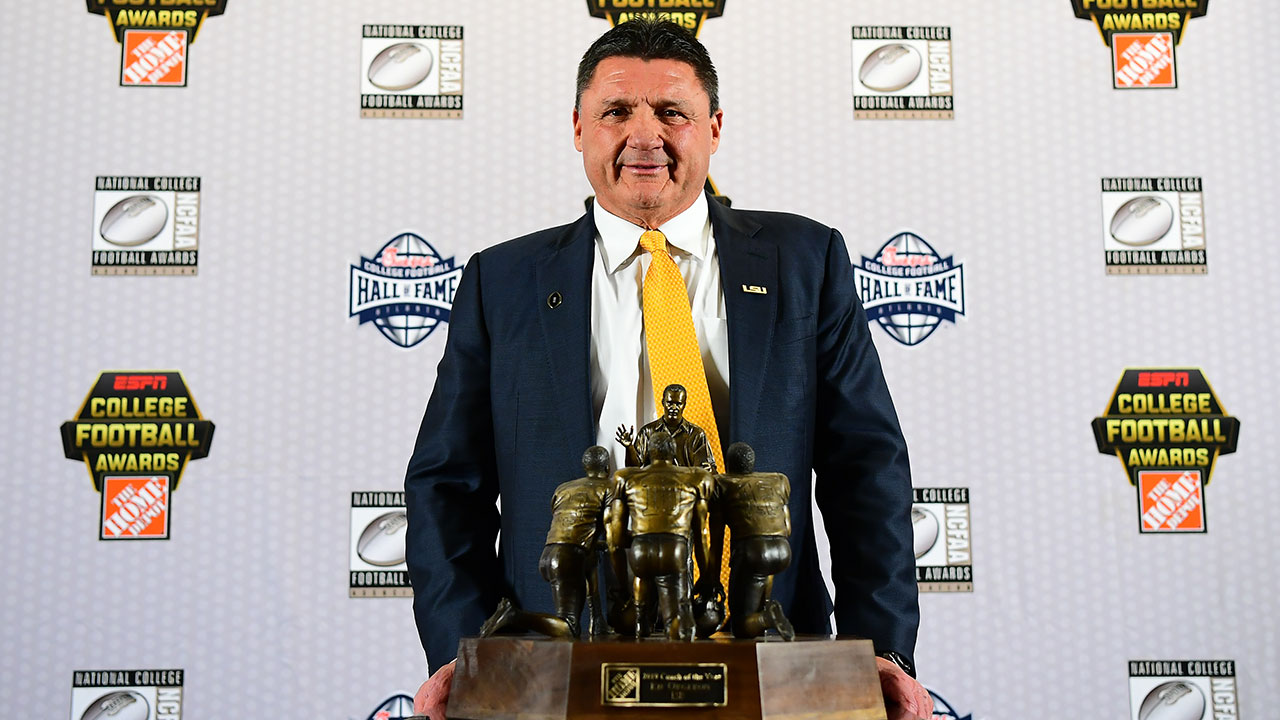 Nothing that will affect him for LSU’s upcoming playoff matchup with Oklahoma – seconds after winning the Biletnikoff Award as the nation’s top receiver, Chase’s mind went straight to Monday’s practice in preparation for the Chick-fil-A Peach Bowl. But when the sophomore wide receiver attempted to pick up the latest addition to his trophy collection, he severely underestimated its sheer mass.

It took two large men to carry in and a dolly to carry out the prize Chase so coveted that he put a sticky note on his bathroom mirror before the season bearing its name, a daily reminder of what he was striving for.

“I won it,” Chase said, still in shock moments after. “I guess I can take the note down.”

Chase wasn’t the only Tiger who went home with hardware Thursday night – far from it. Grant Delpit’s Thorpe Award victory as the nation’s top defensive back, Joe Burrow’s sweep of the Maxwell Award (best all-around player) and Davey O’Brien Award (top quarterback), and Ed Orgeron‘s reception of the National Coach of the Year meant the Tigers enjoyed a banner night and returned to Baton Rouge Friday with plenty of hardware.

When they return to Atlanta in 10 days, however, they’ll start chasing the trophy they truly want, the one they’d trade all five from Friday for in a heartbeat.

“The award comes with winning,” Delpit said. “It’s really a team award, and if I could drop the award for a national championship, I would. We’re not done yet. We have bigger dreams, bigger hopes, coming up the 28th.”

Still, there was time to celebrate, individually and collectively, on Thursday.

No one finished the evening more decorated than Burrow, who picked up two more honors to add to an ever-growing collection of mementos kept in his parents’ basement in The Plains, Ohio. The senior has one more prestigious award to claim this weekend – he boarded a plane for New York City and the Heisman Trophy Ceremony on Friday morning – but his talking points haven’t changed.

He’s already preparing, in his mind, for Oklahoma, and it’s going to take a lot to take his team down.

“We have a bond that can’t be broken,” Burrow said. “You’re going to have to kill us to beat us, I think. That’s just the kind of people we are. We built that bond the last two years in the offseason, coming in on Saturdays, working hard, doing it in the weight room.”

The superhero of the SEC got a lot of weird questions on Thursday, none stranger, perhaps, than what his super power of choice would be, if he could have one. Teleportation, the quarterback replied, so he could wake up in New York City instead of boarding an early plane.

College football’s best passer was happy to throw praise around to his teammates and coach on Thursday night, with Orgeron, in particular, a point of emphasis for Burrow. Asked how Coach O sold Burrow on his vision when transferring to Baton Rouge from Ohio State two years ago, Burrow was blunt and, as usual, right on the money.

“Have you ever talked to Coach O?” he asked. “He could sell you anything if you give him 15 minutes.”

Orgeron, like Burrow, stuck to the playbook that’s led him to this point: 13-0, SEC Champions, No. 1 in the College Football Playoff, and National Coach of the Year. He deflected praise to his players, his staff, his administration, and he remained steadfast that as brilliant as Thursday night was for the Tigers, it was a stop, not a destination.

Before the awards, Delpit dined with the Thorpe Award committee, his family, and former award winner Roy Williams. He read a book about Thorpe’s life and gave a brief speech about his favorite moments of his career. “To be honest,” he said, looking around the room, “I don’t think it’s come yet. We’re going pretty far this year.”

When he won, Delpit breathed a sigh of relief. He badly wanted it last year, the trophy that considers itself the defensive Heisman, and he worried injuries this year would prevent him from collecting it. But when he held it in his arms, he wanted nothing more than to give it away to the predecessors that paved his way at LSU.

“I really want this award to be for the guys who came through LSU and haven’t had a chance to win the award,” he said. “It’s truly a blessing to bring it back to the boot.”

After the awards, Chase, receivers coach Mickey Joseph, and his family enjoyed a steak dinner. Chase talked about his career highlights. His favorite LSU moment so far? Getting to sit on the front of the plane on road trips. Meanwhile, his father, Jimmy, chewed on a victory cigar, and his mother, Toleah, choked back tears.

“It’s a relief,” Chase said after winning the award. “Knowing my dad’s been on me every day, pushing me every day to be a better person, a better athlete, a better son. I just like to see my mom smile. I never want to see her cry. If I see her cry, I want to at least see tears of joy. This is for my parents.”

As dinner wound down, Toleah recalled cleaning her son’s bathroom this fall and seeing his mirror covered in sticky notes: 50 catches, 1,000 yards, Biletnikoff Award, and more. She simply lifted them, cleaned behind, and replaced them, never mentioning them to her son.

The catch, yards, and award post-it notes can come down now. But there are more notes that will remain in Ja’Marr’s mirror – at least until January 13. When the final buzzer CFP national championship game in New Orleans sounds, maybe that mirror can finally get a thorough cleaning.

Until then, there’s more work to be done, more trophies to pursue.

“It’s a good night for us,” Chase said. “But we’re going to have to forget about this in the next 48 hours and get back to work.”