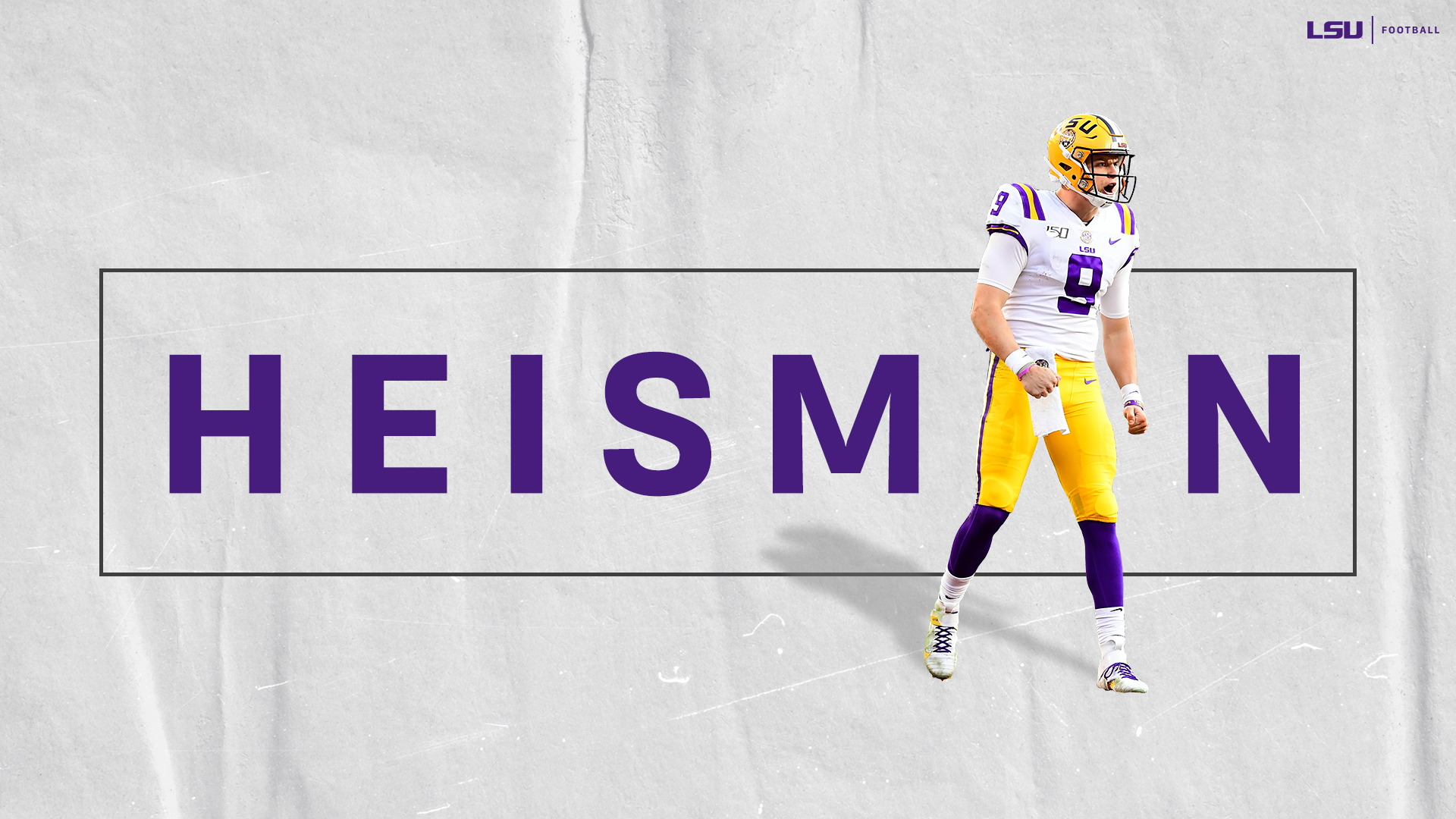 Among the many critical credentials for the Heisman Trophy – gaudy stats, big wins, clutch performances – perhaps none is more engaging than the famed Heisman Moment™.

It’s the single snap that tells the story of a player’s entire season, the microcosm of his excellence, the iconic image that stays with the collective memory of college football long after he takes the trophy home.

For Joe Burrow, the surefire 2019 winner when Saturday’s ceremony comes to its inevitable conclusion, there’s just one problem: he doesn’t have a Heisman moment.

Burrow’s 2019 campaign is full of such highlights, jaw-dropping, breath-taking, chest-clutching, eye-bulging plays which have been known to cause spectators to question the existential fabric of their realities.

To pick one Heisman Moment™ from the buffet of selections would be impossible. So, in honor of Burrow, I’ve picked nine favorites, whose impact on Burrow’s historic campaign are undeniable.

Burrow announced from the very first day of the calendar year that 2019 was his and his alone.

In the 2019 Fiesta Bowl, Burrow closed out his junior season with a remarkable performance, completing 21-of-34 passes for 394 yards and four touchdowns en route to Offensive Player of the Game honors in LSU’s 40-32 win over UCF.

It was Burrow’s lone interception – and, more specifically, his response to it – that belongs on this list, however. On his sixth attempt of the game, Burrow dropped back and fired to the right sideline, where a UCF defender snagged his errant pass. As he ran to tackle the corner after the interception, Burrow was violently blindsided by a Golden Knight defender. His face was bloodied, and he had the wind knocked out of him, but the hit transformed Burrow.

He hopped up, promptly completed 19 of his next 28 attempts for 363 yards and four touchdowns, and set the stage for the season to come.

That’s Ight I’ll take the 4 tds and the dub https://t.co/VVDLdQbqNW

Burrow was eating breakfast in the team hotel in Austin with the offensive line on the morning of Saturday, Sept. 7, when College Gameday opened its show with a blast.

Boos rained from Texas fans as the show opened on a tight shot of Burrow’s No. 9 jersey – which soon had a giant hole from a cannon ball UT cheerleaders fired through it.

As the show started, Burrow turned to the line and promised to throw for 400 yards.

“I wasn’t really ticked off,” Burrow said later in the season. “I just thought it was super weird. I wanted to go and hang 400 on them after that.”

The play of the game was a fourth quarter 3rd and 17 conversion in which Burrow stepped into a crowded pocket and delivered an off-platform strike to Justin Jefferson. The throw went for a 61-yard touchdown and secured a top-10 win for LSU, the first of five (so far) on the season.

“That was one of the best throws I’ve made,” Burrow said after the game. “I was pretty proud of myself after that one, I’m not going to lie.”

LSU’s trip to Nashville in Week 4 was special for Burrow.

In terms of proximity to home, it was a relatively short drive for his family from Athens, Ohio, to Vanderbilt’s campus.

In terms of production, it was another banner day, as Burrow set an LSU record with six touchdowns.

On a third quarter throwaway, Burrow got into a harmless scrap with the Vanderbilt sideline, annoyed with a defender who hit him later than Burrow felt was necessary

“I told him he was a great player, played really hard, and I was honored to go against him on the field,” Burrow deadpanned after the game.

The next drive, he threw a 51-yard touchdown pass to Ja’Marr Chase, Burrow’s fifth of the game. That throw gave him 17 for the season through just four games – one more than he posted in 13 games in 2018.

4. Revenge Tour, Part I: The Gators

According to Joe’s father, Jimmy, there were three games, in particular, Burrow had circled on his calendar coming into the 2019 season: Florida, Alabama, and Texas A&M.

Those, of course, were the three teams who beat Burrow in 2018, and the loss to the Gators was particularly painful: a late pick-six sealed the deal for the Gators.

There would be no repeat in 2019. Against one of the best pass defenses in the country, Burrow was at his best, connecting on 21-of-24 passes for 293 yards and 3 touchdowns – as many scores as incompletions.

The final nail in the coffin: a fourth-quarter, game-clinching touchdown to Chase down the right sideline.

And after the game, the typically taciturn Burrow had more to say to his team.

Joe Burrow’s message to the team after the game: “Don’t let good enough get in the way of greatness.” pic.twitter.com/i5eAxGSFnL

As amazing as any feat Burrow has accomplished this year is just how fast he became the LSU single-season record holder for touchdown passes.

On October 11 against Mississippi State, he silenced Starkville with four touchdowns to reach 29 for the season. In seven games, he set a new school standard for touchdown throws, none more impressive than the record-tying toss to Derrick Dillon in the third quarter.

Plays like this are why Joe Burrow is a Heisman contender. pic.twitter.com/EJXUQi03bW

The Bulldogs tried everything to stop Burrow – they pulled out all the stops – but nothing worked, as he finished the day with 327 yards in the air and a couple of viral moments on Twitter.

Burrow showed off every arrow in his quiver in LSU’s 23-20 win over Auburn on October 26th. Though he finished 32-of-42 for 321 yards and a touchdown, it was by land – not air – that he had his Heisman Moments. Excluding sacks, Burrow racked up 45 yards on 7 carries, avoiding three tackles and picking up four first downs.

His flashiest carry of the day featured a sweet spin on the sideline, while his most impactful – a seven-yard fourth quarter touchdown – put the win on ice for LSU.

All eyes were on Burrow and the Tigers when they took to Tuscaloosa on November 9th.

In the most-watched college football game of the season – and the most-watched since the two teams played the Game of the Century in 2011 – Burrow put on a show for the ages, finishing 31-of-39 for 393 yards and three touchdowns. With an 18-for-20, 252-yard, three-touchdown first half, the senior helped LSU build a 33-13 lead at the break, and his clutch play down the stretch fended off a Tide comeback attempt.

Burrow was also lethal on the ground again, with 91 yards on seven rushing attempts (sacks excluded), including a third-down conversion late in the fourth that put the game to bed. The win put the Tigers in the driver’s seat for the SEC West title and broke an eight-game losing streak to the Tide that dated back to 2012.

After the game, Burrow and the Tigers received a hero’s welcome from LSU fans at the airport.

The Tigers are Home! pic.twitter.com/obkumiD2Ua

The finale of Burrow’s revenge trilogy began with one of the most iconic moments in LSU history, as the senior ran out into Tiger Stadium for the final time wearing an altered last name on his jersey, a tribute to the fans of Louisiana.

A tribute to this great state and university. Death Valley, where opponents dreams come to die… but where mine came true https://t.co/lGLyAkBLAG

After bringing the stadium to its feet, Burrow kept them there, leading LSU to a 50-7 win and setting the SEC mark for passing yards in a single season. He also tied the touchdowns record (he would break it in the next game) while throwing for 352 yards and three touchdowns.

Burrow had long before wrapped up the Heisman when LSU took the field in Atlanta for the 2019 SEC Championship Game on December 7th.

But he loves a flashy finish, and he loves to leave no doubt.

With LSU leading Georgia 20-3 in the third quarter, Burrow conjured up his most magical moment yet. On the first play of LSU’s second drive of the half, Burrow sidestepped a host of Bulldog defenders, rolled right, and uncorked a 71-yard completion to Justin Jefferson.

In a season of unforgettable performances, Burrow gave his best to deliver LSU its first SEC title since 2019. It was the final Heisman Moment for Burrow before voting closed the next day, and it was, perhaps, his finest.