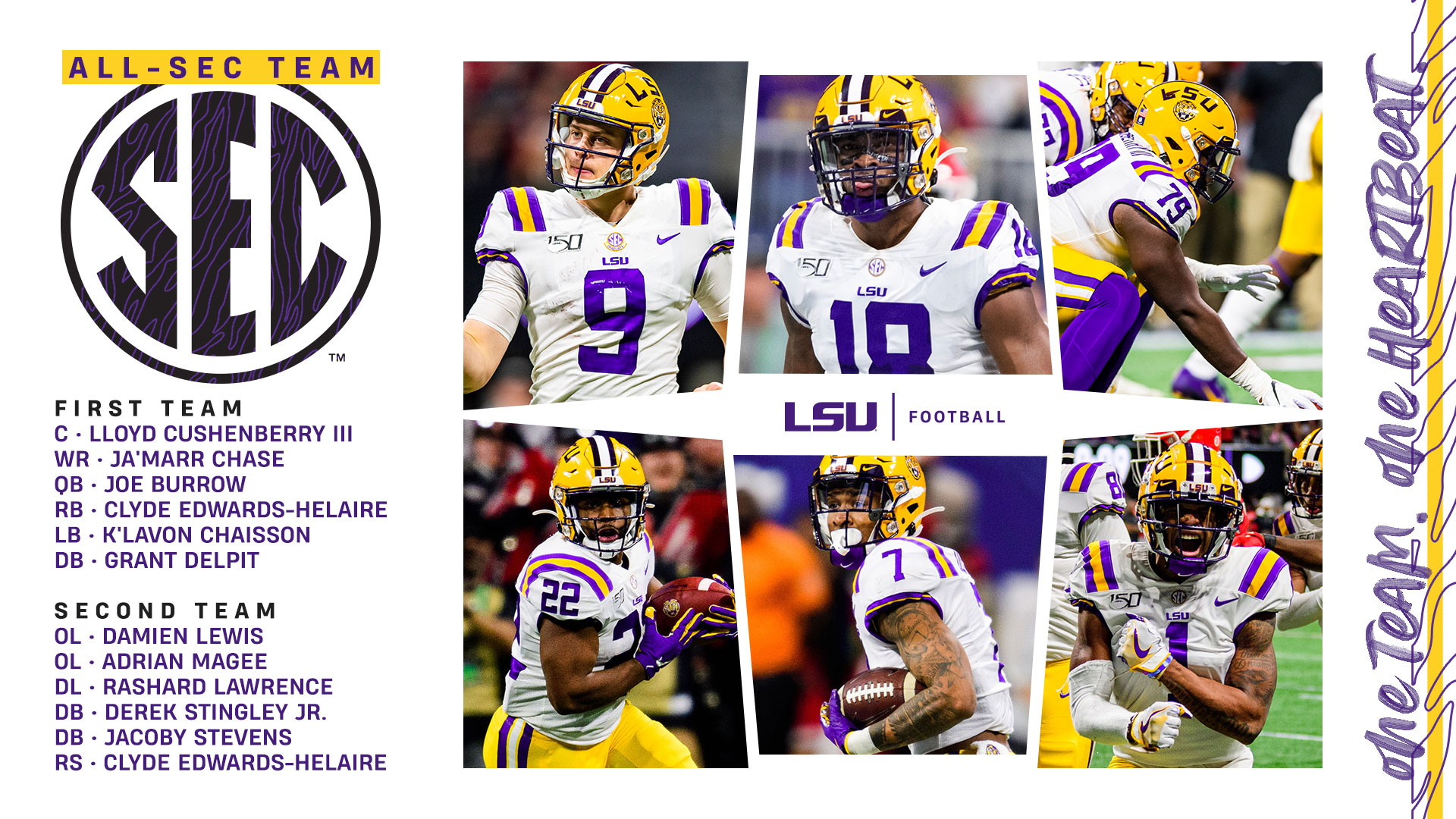 The All-SEC Coaches’ Team is determined by a vote of league’s 14 coaches. Coaches are not permitted to vote for their own players.

In all, the Tigers had six players on the first team along with six selections on the second team. Joining Burrow, Chase and Edwards-Helaire on the first team were junior center Lloyd Cushenberry III, sophomore outside linebacker K’Lavon Chaisson and junior safety Grant Delpit.

Burrow, a finalist for the Heisman Trophy, set nearly every LSU passing record in 2019 as he guided the Tigers to a 13-0 mark and No.1 national ranking. Burrow became the first player in SEC history to throw for 4,000 yards and 40 touchdowns in the same season as he completed 342-of-439 passes for an SEC record 4,715 yards and a league record 48 touchdowns.

Burrow, who is 23-3 as LSU’s starting quarterback, directed the Tigers to a record five wins over Top 10 teams in 2019. He threw for 300 or more yards 11 times and had at least four TD passes in seven games. He set the school-record with six touchdown passes in a win over Vanderbilt.

Chase, a sophomore from Metairie, tied the SEC record for touchdown receptions with 18 in 2019. He led the SEC in receiving yards with 1,498 on 73 catches. Chase is the only player in LSU history with two 200-yard receiving games during the regular season.

Edwards-Helaire, a junior from Baton Rouge, finished second in the SEC in rushing yards with 1,290 and he led the league in rushing touchdowns with 16. Edwards-Helaire averaged 99.2 rushing yards per game and he rushed for 100 or more yards six times in 2019. He also led the league in all-purpose yards with 1,903 and ranked No. 2 in the conference in all-purpose yards per game with a 146.4 average.

Cushenberry started all 13 games at center for an LSU offense that set the school record for points (621), points per game (47.8) and total offense (7,206). Cushenberry, along with Lewis and Magee, who also started every game on the offensive line for the Tigers, helped pave the way for the first team in SEC history to feature a 4,000-yard passer, a 1,000-yard rusher and two 1,000-yard receivers.

Delpit, a finalist for the Thorpe Award, earned first team All-SEC for the second straight year. He’s fourth on the team with 56 tackles to go along with 3.0 tackles for loss, one sack and two pass interceptions.

Chaisson, a sophomore from Houston, led the Tigers with 11.5 tackles for loss to go with 52 tackles and 4.5 sacks.

The All-SEC second team featured three LSU defenders in Lawrence (23 tackles, 5.0 tackles for loss, 2.5 sacks), Stevens, who was named the SEC Defensive Player of the Week three times this year and Stingley, who led the SEC in both interceptions (6) and passes defended (21).

Stevens finished second on the team with 82 tackles to go with 8.5 tackles for loss, 5.0 sacks and three interceptions. Stingley, who was named SEC Newcomer of the Year by the AP on Monday, tallied 34 tackles.