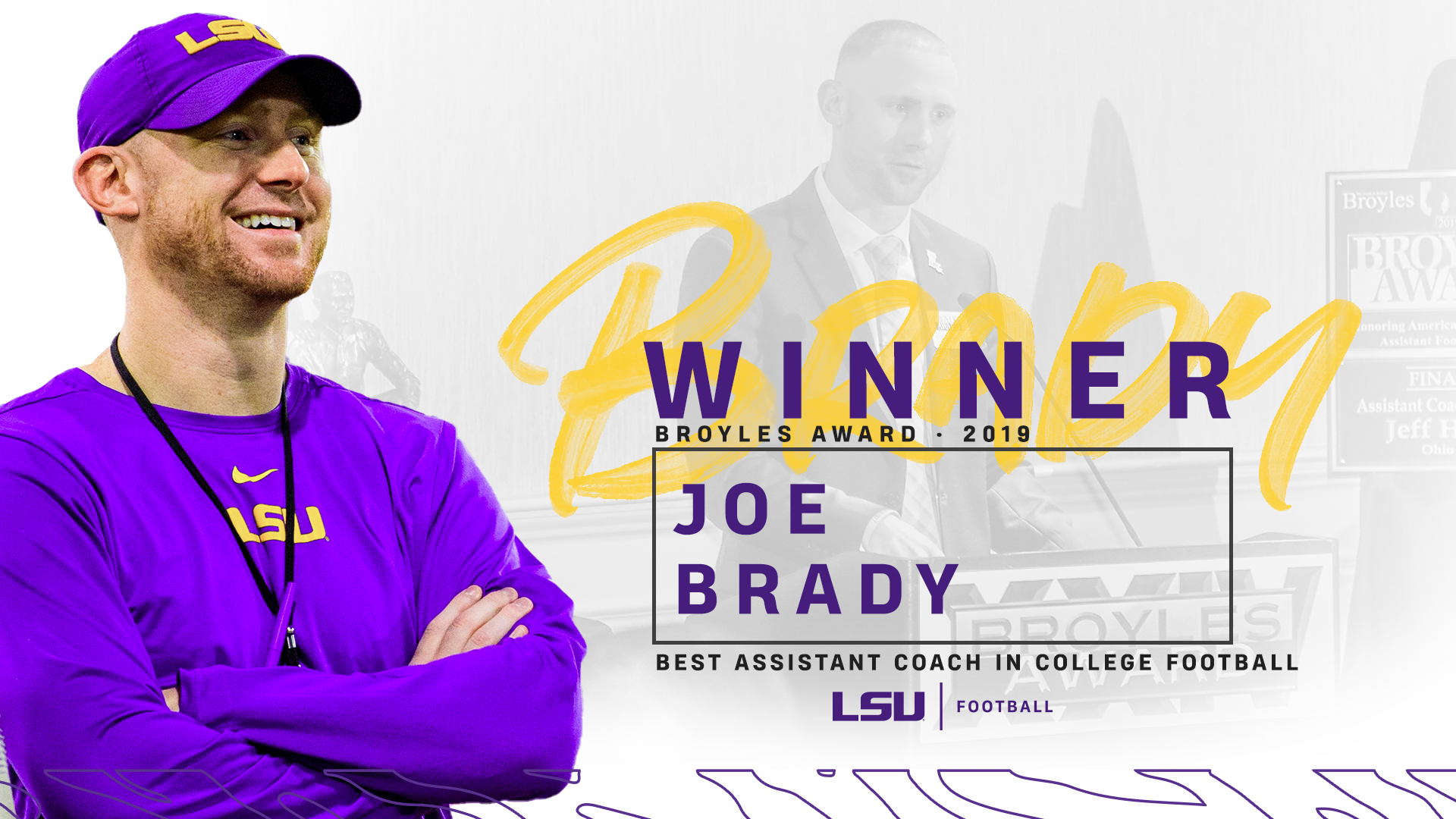 BATON ROUGE – LSU passing game coordinator and wide receiver coach Joe Brady has been named the winner of the Broyles Award, which is presented to the top assistant coach in college football, the Frank and Barbara Broyles Foundation announced Tuesday in Little Rock, Ark.

Brady, in his first year with the Tigers after spending two seasons on the New Orleans Saints staff, and offensive coordinator Steve Ensminger have transformed the LSU offense into the most explosive unit in college football. The Tigers are averaging a school-record 47.8 points per game. The Tigers led the nation in total offense (554.3 yards per game) and rank No. 1 in the SEC and No. 2 nationally in passing offense (386.8).

“This award should say Joe Brady/Steve Ensminger,” Brady said on Tuesday in Little Rock. “I’m only at LSU because of Steve Ensminger. I’ll never forget that … There is not a greater person to work for than Steve Ensminger and there is not a greater person that cares more about LSU and the success of this program. He doesn’t want to take credit for anything. I’m so grateful for Steve, and I hope to be him one day.”?
Overall, LSU’s offense racked up a school-record 621 points, scoring 50 or more points six times and going over the 40-point mark a record 10 times. Only one time all year was LSU held below 30 points.

In 13 games, the LSU offense cracked the 500-yard mark 10 times, which included 714 yards in a win over Ole Miss, the most yards ever recorded by a team in a game against another SEC opponent.

Individually, LSU quarterback Joe Burrow – one of four finalists for the Heisman Trophy – has re-written the school record books as he’s the first quarterback in SEC history to throw for 4,000 yards and 40 TDs in a season. Burrow broke the SEC record for passing yards in a season with 4,715 and touchdowns with 48. He currently leads the nation in passing TDs and ranks No. 2 in the country in passing yards.

Burrow was named the SEC Offensive Player of the Week on Monday by the Associated Press becoming the first Tiger to claim the honor since wide receiver Wendell Davis won the honor in 1987.

Burrow, along with running back Clyde Edwards-Helaire and receivers Ja’Marr Chase and Justin Jefferson, represent the first group of players from the same team to have a 4,000-yard passer, a 1,000-yard rusher and two 1,000-yard receivers in the same season in SEC history.

Chase is one of three finalists for the Biletnikoff Award (Nation’s Best Receiver). Chase tied the SEC record for touchdown receptions this year with 18. He currently leads the nation in TD receptions, receiving yards (1,498) and yards per game (124.8).