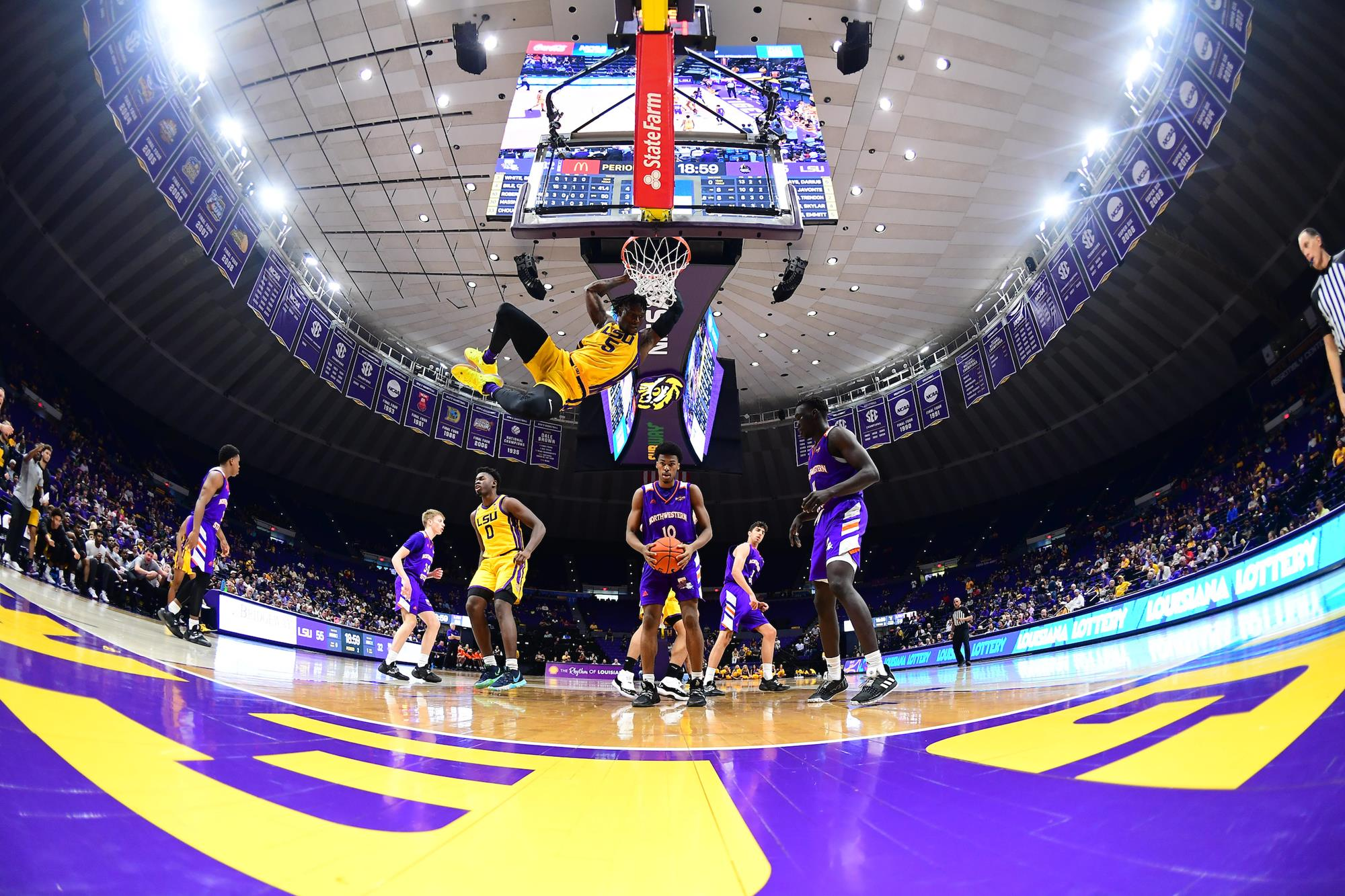 BATON ROUGE – The LSU Tigers put seven players in double figures and scored the most points in the Will Wade era at LSU in a 109-59 win over Northwestern State Sunday afternoon at the Pete Maravich Assembly Center.

The Tigers are now 7-2, winners of four straight, heading into a 10-day semester exam break. LSU’s next game will be Dec. 18 at home against East Tennessee State University. ETSU is 8-2 heading into their next contest on Dec 15. Tickets are available at LSUTix.net.

LSU had scored 105 and 104 points in the first two months of Coach Wade’s tenure at LSU and crossed the 100 point mark in this game against the Demons with 2:12 to play on a tip-in by Courtese Cooper that made the LSU lead, 101-59.

LSU’s five starters combined for 77 of LSU’s points with Javonte Smart scoring 17 points, Darius Days and Emmitt Williams had 16 each and Trendon Watford and Skylar Mays each scored 14 points. Off the bench Bishop ended up with 11 points and Aundre Hyatt added 10 more. Each of the ten players that played scored.

Smart had no turnovers in almost 25 minutes of play and over the last three games has recorded 35 points, 20 assists and 3 turnovers.

The game also marked the 82nd consecutive time that LSU has won when holding a 20 or more point lead at halftime (LSU was up 52-32 at the break).

In one final note from the game, the Tigers came out in their gold uniforms for the first time this season. It was the first win for LSU in gold jerseys in the Will Wade era in the four games the Tigers have worn that color.

Northwestern State was led by Chudier Bile with 20 points for the Demons on 7-of-14 shooting with three treys.

On the team’s performance…
“I thought we did some good things. I was pleased that Emmitt (Williams) was six-of-six from the field. He had another double-double. I was really happy with (Trendon) Watford’s free throws. You’re looking for stuff that can translate to other games. I thought our diamond press looked better maybe than it had in some earlier games. I thought we did some good things. We have a lot tougher competition coming up.”

On seven guys scoring in double figures…
“It was huge. I thought Javonte (Smart) played great, 17 points with three assists and no turnovers. Javonte has been coming in and working on his shot and working hard. I think he’s certainly paid it off and I was really happy to see him play well.”

LSU Forward Emmitt Williams
On a slow start for LSU…
“I don’t know if it’s a slow start, it’s basketball. You have to get a feel for the game and then we can get it rollin’. You say we start off slow, but I see we won by 50.”

On LSU’s seven players scoring double figures…
“My point guard Javonte Smart had eight rebounds, I’ve been getting on him about that. He might become a block-boy. We call that a block-boy. Me and Darius (Days) are the ones who go down there and get the rebounds. My boy had eight today! He led our team very well, we executed plays, we were solid on defense, and we had a lot of stops.”

LSU Guard Javonte Smart
On his eight rebounds…
“Every day, every game, Coach Wade is saying we need to rebound. Me, Skylar (Mays) and all of the guards, so I took it upon myself to go out there and get as many boards as I could.”

On settling in to his point guard role…
“I got big monsters down there. Emmitt, Days, Trendon (Watford), then me and Skylar. I have a lot of good players around me. I try to get them the ball as many times as I can and see them get buckets. It’s been an all-around team effort. Guys hit their shots when I pass it to them, so I have to get them the ball.”

On the scoring balance…
“It gives everybody confidence, even the bench guys. When they get in, they’re able to make shots and everyone is capable of scoring.”

“We took care of the basketball; they didn’t really put any pressure on us but then they went to their full-court press.  We turned the ball over, and they scored 10 or 12 points.  They only scored four points off of turnovers at that point but ended up scoring 36 off of turnovers for the game.  They had a 10 or 12-point run and next thing I know the deficit goes from 10 to 20.  We scored two buckets to cut it to 20 at halftime and in the second half they just came out and it was like they did whatever they wanted to do.  They are extremely long and talented and have a pace that lulls you to sleep. Like I said we did some good things, halfway through the first half and then the wheels came off especially in the second half.”

On how they gave up turnovers facing a full-court press…

“They are just a talented team and are well coached.  They do a lot of things well, but we hadn’t had this many hung on us in a long time. The first five times we got the ball up and through but then after that it was one turnover after another.  Guys weren’t attacking the ball or doing certain things so it’s pretty frustrating.  This is something we have to work on, but the difference is length and speed.  We just got torched by50 and are going into our first league game in 10 days, so we have a chance to get over this.”