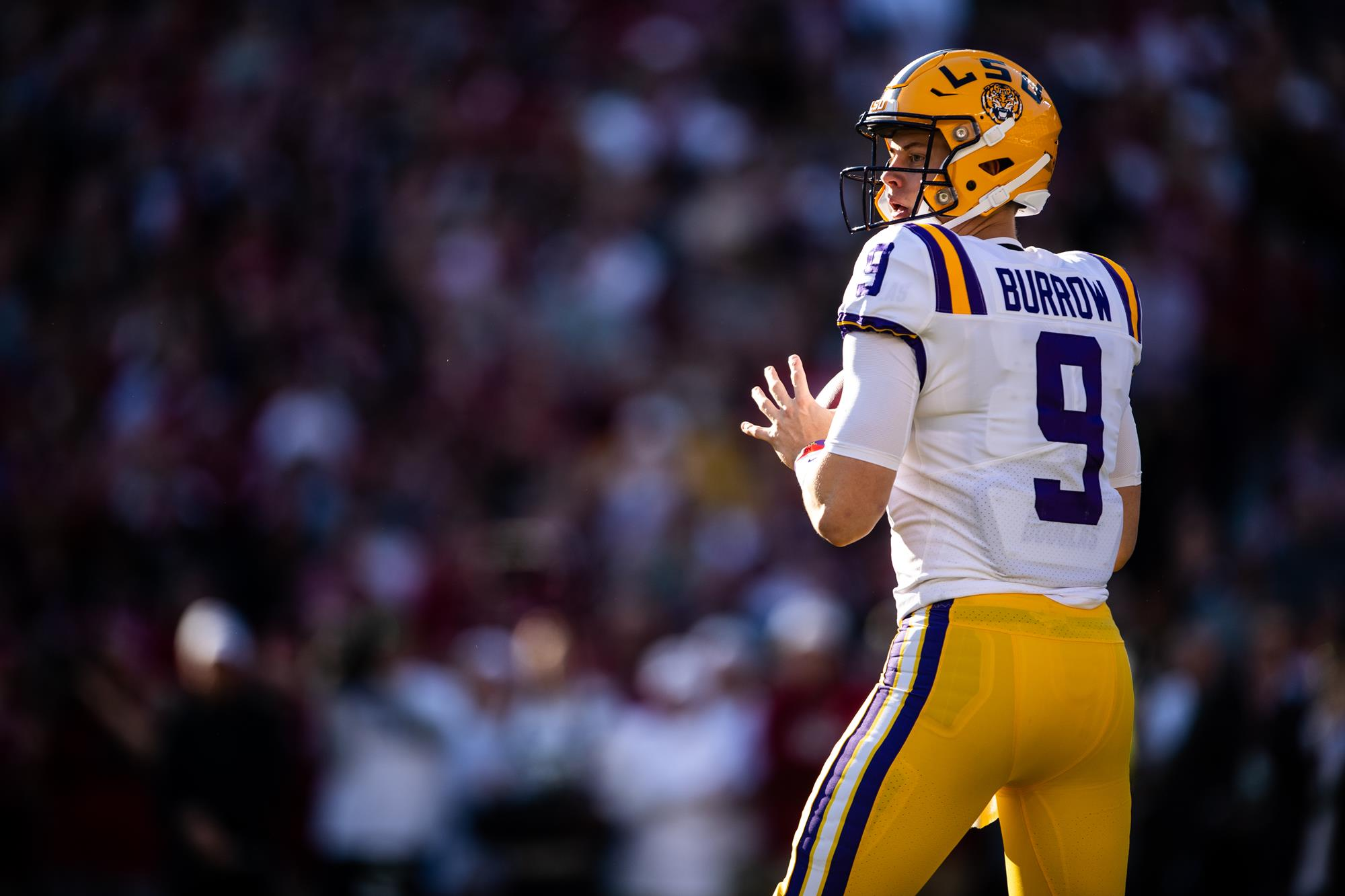 In the moments after knocking off unbeaten Alabama in Tuscaloosa, where he rolled up 393 yards and three touchdowns against the Tide defense, Joe Burrow was finally asked, directly about the elephant in the room.

Did you ever dream of one day winning the Heisman Trophy?

“Obviously growing up, you watch the ceremony,” Burrow said. “You watch how much it means to people. You grow up wanting to win that award. But when I got to college, I realized team success brings all the individual awards. And that’s all that’s ever mattered to me: winning games.

The stats say plenty this year, as Burrow is in the final stages of one of the greatest seasons by a quarterback in college football history.

Efficient and explosive. Tough as nails and cool in the clutch. The numbers tell the story better than anything else ever could: Joe Burrow isn’t just this year’s runaway Heisman candidate. He might be the Heisman of all Heismans.

That’s Joe: How the Stars Aligned for Joe Burrow, College Football’s Brightest Star and Hero of The Plains

Completing 78.3 percent of his passes, Burrow is on track to surpass Colt McCoy’s single-season record of 76.7 percent set in 2008. Burrow has completed more than 71 percent of his passes in each of the Tigers’ 12 games this year, and he’s thrown consecutive incomplete passes just 18 times all year.

Factoring in drops, throwaways, and batted passes, Burrow’s adjusted accuracy improves to 83.5 percent, the highest mark in Pro Football Focus’ statistical database, which dates back to the 2014 season.

Burrow ruthlessly attacks the heart of opposition defenses. He’s completed 219-of-255 passes between the numbers this season –  an incredible 85.8 percent completion mark – for 2,904 yards, 28 touchdowns, and just one interception.

Meanwhile, Burrow keeps LSU’s offense ahead of the chains: he’s completing 80.6 percent of his passes on first down, and his 228.9 passer rating on first downs in the highest figure in the last decade.

LSU doesn’t attain efficiency at the expense of explosiveness, though. Burrow’s a master of both, capable of beating you underneath or over the top.

His numbers on throws of 20+ yards are off of the charts: 33-of-56 (58.9 percent) for 1,166 yards, 18 touchdowns, and two interceptions. That’s the highest completion percentage and most touchdowns on such throws, and it’s the fourth-most yards, bettered only by three players with 25+ more attempts than Burrow.

Burrow ranks second nationally in completions of 10+ yards, 20+ yards, and 60+ yards, and his 10.9 yards per attempt rank third.

In terms of expected points added (EPA), Burrow has the fifth-highest figure (112.1) in passing EPA since 2004, with two games left to play. His total EPA of 112.5 is nearly five points higher than any player in the country, and it’s 41.5 points higher than Ohio State’s Justin Fields, who ranks fourth in the metric.

It’s hard to quantify toughness – you know it when you see it, and with Burrow, it’s easy to see – but it’s not impossible to put numbers to it.

One measurement is how a quarterback functions under pressure, and no one is better than Burrow under the heat.

Joe Burrow’s stats on throws where he was hit this season:

All are tops in the country. The passer rating is 30 points better than any other QB while being hit in the last six seasons.

Be careful about hitting Burrow, because he’s at his best when you do. On throws where he’s been hit this season, he’s completing 24-of-33 (72.7 percent) for 509 yards, 4 touchdowns, 15.4 yards per attempt, and a 154.4 NFL Rating. All are tops in the country, and the passer rating is 30 points better than any other QB while being hit in the last six seasons.

Burrow also shines with his back against the wall. He completes 79 percent of his passes and had a 136.1 NFL Rating after an opponent scores, ranking first and third nationally, respectively.

No one is better when the chips are down than Burrow. He’s the most clutch quarterback in the country, and it’s not even close.

Set aside the obvious – LSU’s 12-0 record, road wins over top-10 foes, Burrow’s fourth-quarter passer rating of 203.14, despite only playing in nine of 12 possible fourth quarters this season.

Look deeper: in clutch play situations, Burrow is 55-of-68 (80.9 percent) for 811 yards and 8 touchdowns this season, including an 88.7 adjusted completion percentage. All marks lead the SEC.

Adverse situations and high stakes bring out the best in him. He’s thrown 25 touchdowns and 0 interceptions in the red zone, and he’s got a passer rating of 233.5 in third and long situations, which is why LSU’s offense converts on third down 50 percent of the time.

When you stack Burrow’s stats against the quarterbacks who have won the Heisman since 2000, he’s either already the best of the bunch or on pace to finish there.

If he posts his current averages in LSU’s next two games, Burrow will finish as the king of modern Heisman quarterbacks, owning the best mark in every major statistical category.

Compared to the 15 quarterbacks to win the award this millennium, Burrow ranks first in completion percentage and passer rating, and he’s on pace to finish first in yards, touchdowns, and completions.

Only Sam Bradford in 2008 completed more passes – Burrow is just 14 behind him with two fewer games played and is on pace to surpass him by the third quarter of Saturday’s SEC Championship game.

Only Bradford has thrown for more yards, too, but Burrow, who averages 363 yards per game, is just 354 yards from breaking that mark, too.

Bradford’s 50 touchdown passes is also the standard, but Burrow needs six to match it and seven to surpass it, and he averages 3.7 touchdowns per game.

All those numbers to say this: Joe Burrow isn’t just the clear Heisman winner for 2019. If you gathered every Heisman quarterback since 2000 and gave out a single trophy to the best, chances are, he’d take that one home, too.

On Saturday, in his Death Valley finale, he had the final word.

He’s the best QB in the country. He’s the SEC passing king. He’s the Heisman.

Most importantly, he’s a Tiger, who loves LSU as much as LSU loves him. https://t.co/fUJxzckB5P pic.twitter.com/mLmSYwXyCZ