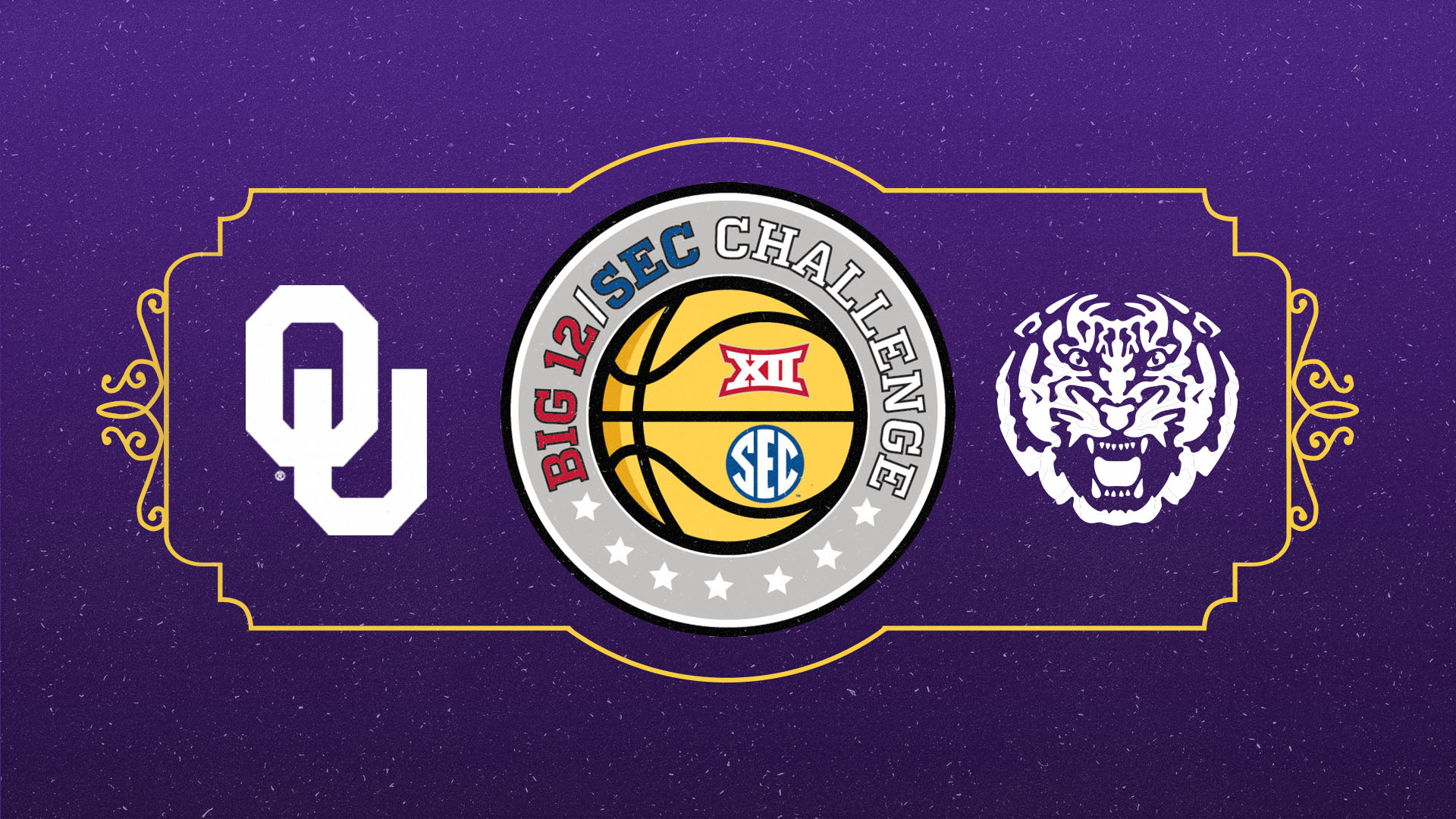 BATON ROUGE – The No. 25 LSU women’s basketball team will be on the road for the 2019 version of the Big 12/SEC Challenge. The Tigers will face Oklahoma in the Lloyd Noble Center in Norman on Saturday, December 7 at 3 p.m. CT.

The game will be broadcast on FOX Sports-Oklahoma with Brenda VanLengen and Dan Hughes calling the action. Fans can also listen to Patrick Wright call the game on the LSU Sports Radio Network. Wright is in his 30th season as the “Voice of the Lady Tigers”. Fans can listen on 107.3 FM and audio broadcasts are available online at LSUSports.net/live. Live stats will be available at LSUsports.net.

The Tigers are back in the Associated Press Top 25 Women’s Basketball Poll for the first time since the end of the 2017-18 season. LSU was ranked No. 24 in the final AP poll that season.

LSU is now 8-1 with its seventh consecutive victory. It is the first time LSU has started the season 8-1 since the 2013-14 season when the Tigers were ranked in the top 15 and advanced as far as the NCAA Sweet 16.

LSU picked up a big win on Friday against then-No. 15 Michigan State, 58-56, and went on to beat Memphis, 89-58 on Saturday to win the Bimini Division of the Junkanoo Jam. Since the lone loss on the season to now-No. 8 Florida State, LSU has beaten Little Rock, Rutgers and Michigan State, all 2019 NCAA Tournament teams.

Ayana Mitchell, Faustine Aifuwa and Khayla Pointer have become LSU’s Big Three one month into the season. Pointer was named the Most Valuable Player of the Junkanoo Jam and was joined on the All-Tournament team by Mitchell.

Mitchell is on track to become only the fourth LSU player to reach the 1,000 points-1,000 rebounds career marks – currently at 1,102 points and 799 rebounds. She has 31 double-doubles over her career and earlier in the season became the 33rd Tiger to score 1,000 career points. Mitchell played the 100th game of her career against Michigan State on Nov. 29. She is averaging 12.7 points and 8.3 rebounds per game, following a season-high performance of 21 points against Nicholls on Wednesday. Mitchell was 9-of-9 from the field against the Colonels, raising her season field goal percentage to 64.6.

Pointer leads the squad from the point with 14.0 points and 4.0 assists per game. She also has the best free throw shooting percentage on the squad at 69.6 and the most steals with 24.

Aifuwa is off to a strong start in the paint for LSU. Aifuwa is third on the team with 12.3 points per game. She is sporting a 60.2 field goal percentage to go along with 6.6 rebounds per game and eight blocked shots.

LSU continues its solid play on scoring defense, holding teams to 53.2 points per game, ranked 19th in the nation. The Tigers have held three opponents to 50 points or under twice and seven opponents under 60 so far this season, all victories.

Bench play has gotten stronger as the season has progressed. The LSU bench has outscored opponents 66-19 over the last two games, led by Mercedes Brooks, Awa Trasi and Domonique Davis with a combined 40 points.

Oklahoma is currently 4-4 on the season following Wednesday night’s 74-63 loss at Western Kentucky. Junior Ana Llanusa and sophomore Taylor Robertson lead the Sooners in scoring with 19.1 and 19.0 points per game, respectively. Sophomore Madi Williams is averaging a double-double with 13.4 points and team-leading 10.3 rebounds per game.

This is the first meeting between the two schools. LSU is 2-1 in the Big 12/SEC Challenge with wins over TCU and Texas Tech and a loss to Kansas.

On the threats seen from Oklahoma…

“Oklahoma is obviously a well-coached team. They have players on the perimeter that can shoot the ball really well. We’re going to have to make sure that we’re doing our part because we’re playing a team that attempts 35 three-point shots a game. They have a young lady, (Taylor) Robertson, is probably the best three-point specialist we’ve faced this season. It doesn’t take a lot of time for her to get the shot off. She doesn’t need a lot of space, has range, and is shooting an unbelievable percentage from the 3-point line. Their team has a lot of weapons at different times. It can be her, it can be #22 (Ana Llanusa), it could be (Mandy) Simpson coming off the bench and playing really tough for them. It’s going to be key for us to be dialed-in and not allowing their two best players who are averaging right under 40-points a game to meet their average or better.

On why LSU’s transition game is effective…

“Pace. We want to be an up-tempo, push the ball back at you team. So pace of the game is where we feel like we can maximize our potential. When we play with Ayana Mitchell, Faustine Aifuwa, and we can even throw Awa Trasi as far as her numbers, having touches, we’re operating well over 50%. It’s just making sure that our perimeter game understands that the flow of the game that those guys that operate at a high-high percentage get their touches. When it’s flowing, then let’s let the jumpers just fly. When it’s not flowing, we need to know the difference in slowing it down or changing to a high-percentage play call to a high percentage player. Understanding that part of it will allow us not to have a drought where we’re not efficient that quarter. You can see that when we’re more in-tuned with that, we’re putting up over 20 points a quarter. We want to have a point a possession, so I think that will help us in our execution.

“We knew that playing Florida State was going to be a great challenge for us early, and we knew that Florida State was returning a really good basketball team that had done really well in post season and within their conference.  After the loss, I remember talking to our team about what are the things that we can take from this that are positive.  There were so many positives in that game where we could have looked at each possession and in our late game, we talked about the looks that we had.  We had an opportunity to score a layup, we had some missed free throws, we had a couple of turnovers, and if you can get those possessions back you would take them but we knew that we were in a position to win that game.  When you’re tied with three minutes to go in the game, like that, big time players have to make big time plays.  We got the consecutive stops, I think we got three or four consecutive stops in that three-minute span but we couldn’t convert, and so that’s the lessons we took from that game.  Every possession matters, every time you step on the floor it has to be 40 minutes of you being in tuned.  No matter what you’re running at the end of the game is equally as important when you run it at the beginning, in the middle of the game.  The games that we have had to come back, we’ve fought, we’ve done what we needed to do, but we’ve also been able to finish out the game and different players have made a difference and I think its also attributing to the fact that our bench is giving us quality minutes and quality production.

LSU has a break for finals before taking on Florida Gulf Coast on Thursday, December 19 in Fort Myers.

Fans can purchase tickets for the next home game, Dec. 28 vs. Florida A&M, at LSUtix.net. The SEC Pack is a mini-plan that features all eight home SEC games for $60.