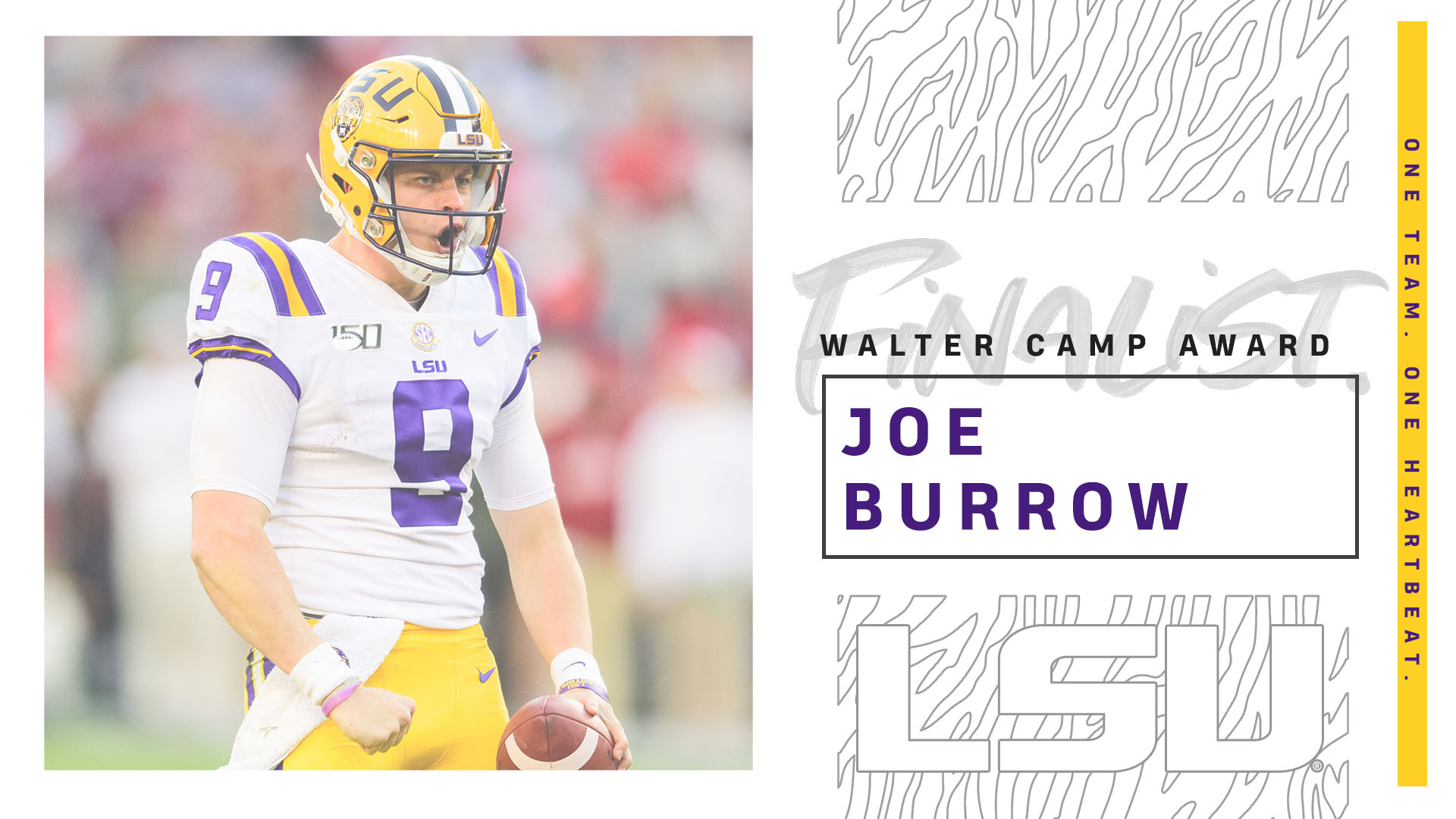 BATON ROUGE – LSU’s record-setting quarterback Joe Burrow has been named one of five finalists for the 2019 Walter Camp Football Foundation Player of the Year award.

The 2019 Walter Camp Player of the Year recipient, who is voted on by the 130 Football Bowl Subdivision head coaches and sports information directors, will be announced on Thursday, December 12 during the 6 p.m. edition of ESPN SportsCenter. Burrow, Justin Fields (Ohio State), Chuba Hubbard (Oklahoma State), Jonathan Taylor (Wisconsin) and Chase Young (Ohio State) are the five finalists.

Burrow is also a finalist for the Davey O’Brien and Maxwell awards, which will be announced at the Home Depot College Football Awards Show on ESPN on Thursday, Dec. 12 at the College Football Hall of Fame in Atlanta

On the field, Burrow has set nearly every LSU single-season passing record in leading the Tigers to a 12-0 overall mark and a No. 1 national ranking. Burrow and the Tigers will face fourth-ranked Georgia on Saturday in the SEC Championship Game in Atlanta.

Burrow is the first player in SEC history to throw for 4,000 yards and 40 TDs in the same season. Last week against Texas A&M, he set the SEC record for passing yards in a season with 4,366 and he’s currently tied for the most passing touchdowns in a season with 44.

In 12 games, Burrow has completed a school-record 314 passes on a school-record 401 attempts. He’s thrown at least one TD pass in a school-record 16 consecutive games and he’s gone over the 300-yard mark in 12 of LSU’s last 15 contests, including six straight games – also a school-record. Burrow holds the LSU record for 300-yard passing games in a season (10) and career (12).

The SEC Offensive Player of the Week five times this year and seven during his two years with the Tigers, Burrow ranks No. 2 in LSU history in career passing yards (7,260) and passing TDs (60). His completion percentage of 78.3 in 2019 is on pace to break the all-time NCAA mark of 76.7 held by Colt McCoy of Texas in 2008.

The 2019 winner will then receive his trophy at the Foundation’s 53rd-annual national awards banquet, presented by David McDermott Lexus of New Haven, on Saturday, January 18, 2020 at Yale University’s Lanman Center.

Walter Camp, “The Father of American football,” first selected an All-America team in 1889. Camp – a former Yale University athlete and football coach – is also credited with developing play from scrimmage, set plays, the numerical assessment of goals and tries and the restriction of play to eleven men per side. The Walter Camp Football Foundation – a New Haven-based all-volunteer group – was founded in 1967 to perpetuate the ideals of Camp and continue the tradition of selecting an annual All-America team. Visit www.waltercamp.org.