Williams Showcases Maturation with Another Double-Double 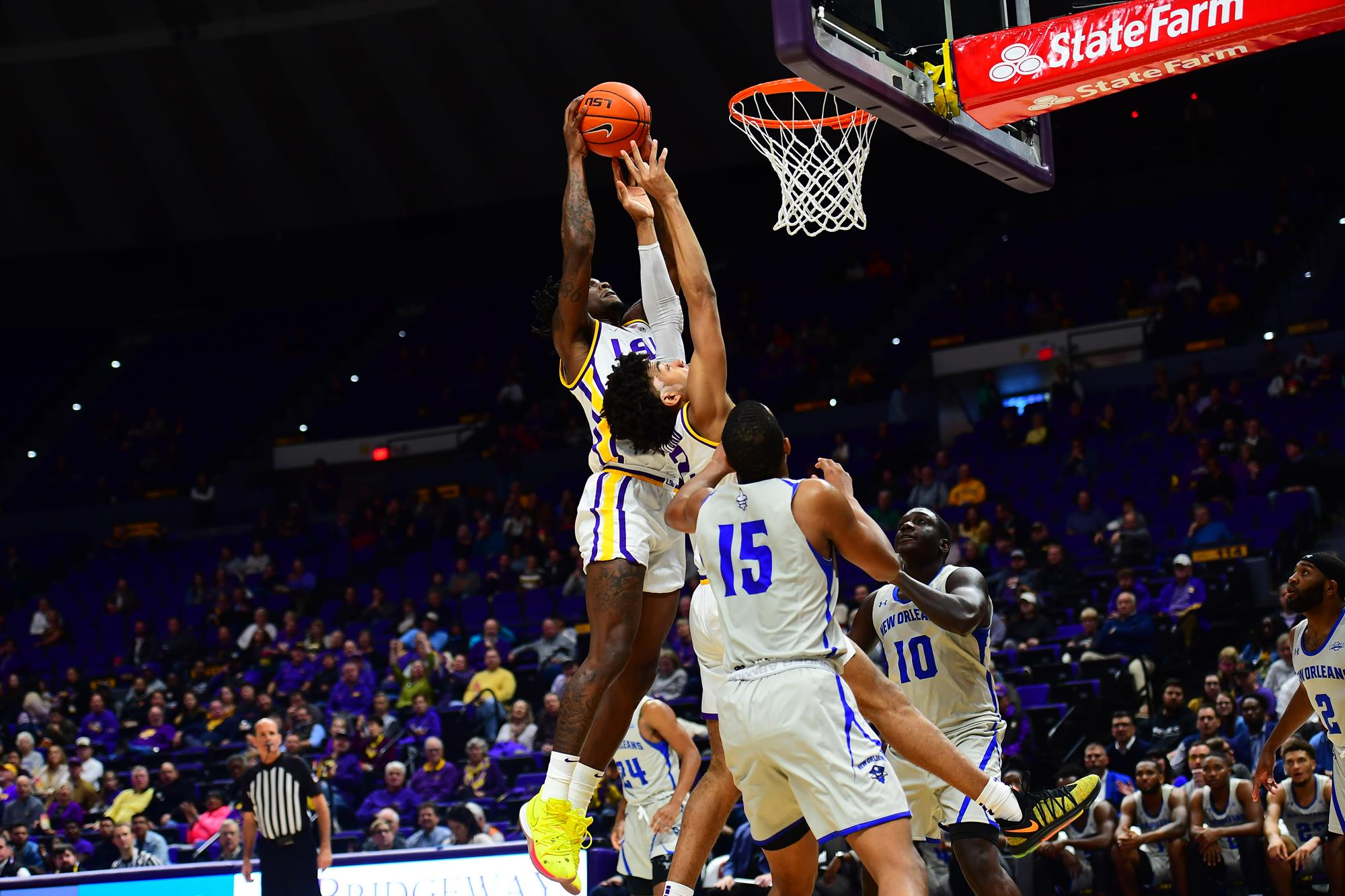 Emmitt Williams may wear bright yellow shoes and extra short shorts, but what’s garnering the sophomore forward most of his attention lately is his play on the floor.

“I’ve been getting buckets in them,” he joked about his Spongebob-themed Kyrie’s after LSU’s 90-54 win over New Orleans Tuesday night. “So why stop?”

It didn’t stop against the Privateers, as he registered his second double-double of the season and continued to show why he’s one of the highest-rising players in the SEC. On Tuesday, Williams provided the Tigers with a much-needed boost of energy on both ends of the floor, tallying a team-high 18 points, 10 rebounds and a steal, helping extend the team’s home winning streak to eight games dating back to Feb. 20.

Williams is a player riding a streak of impressive performances, now holding four-straight games in double figures. Last week, Williams posted a career-high 27 points and 9 rebounds in LSU’s 96-83 win over Rhode Island in Jamaica, and he’s shown no signs of letting up since.

The biggest difference for Williams this year, he says, has been his approach. He’s matured from his preparation. His IQ has increased, and it’s allowed him to play a little more naturally and freely.

“Everywhere,” said Williams on where he feels he’s improved the most. “I try to work on it all. From guarding the ball, being off the ball, I try to watch film and see what I can do to be better.”

Williams prides himself on flying around the court and being disruptive. With the departures of Naz Reid and Kavell Bigby-Williams to the NBA, Williams has shown early signs of becoming a more established forward, inside and out. When he announced his return to school in May, a big reason why was to take his game to a new level.

So far, so good for the Fort Myers, Florida native.

After Friday’s win against Missouri State, Wade emphasized the need for improvement around the boards. On Tuesday, Williams and LSU dominated the battle around the glass, out-rebounding UNO 40-30, while also scoring 52 of their 90 points in the paint.

The Tigers’ main focus this year has been to simply hold onto the ball, and Tuesday was a major step toward that. LSU showed improvement, greatly minimizing the turnovers with a season-low eight after giving a couple away early in the game.

“It was a slow start. As you can see, basketball is a game of runs,” Williams said postgame. “We started off slow, but as you could see we sped up.”

Get the ball to Emmitt, and let him go to work ?? pic.twitter.com/XQy4Jyki5t

It’s clear that everything Williams does is at maximum speed, and it rubs off on his teammates. He plays with energy, he watches film with energy, and even when he’s not playing, he sits on the bench with energy.

“I feel that way on and off the court,” said Williams on his energy around the team. “On the bench, I try to bring that energy to our guys so when they get in the game they are going to be fired up.”

Whenever he’s off the court, Williams is the type of person you want to be around. He’s a jokester with an infectious personality and a contagious smile. On the court, however, he’s a nightmare matchup opposing teams want to avoid at all costs.

“I’m a cool person. When people see me I want them to smile and laugh,” Williams said. “On the court I’ve got to be serious. This is my time.”