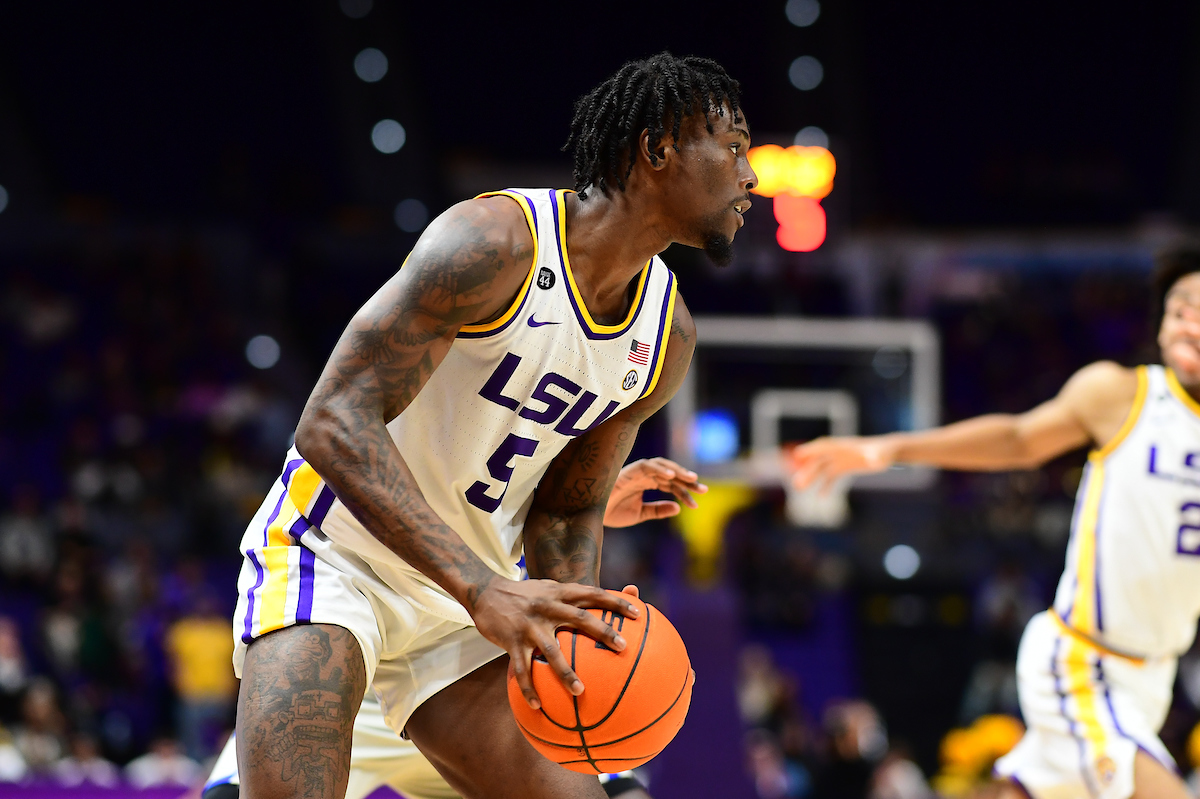 BATON ROUGE – The LSU Tigers closed the first half on a 8-0 run and had a 20-point scoring run in the second half to get a convincing 90-54 win over the New Orleans Privateers Tuesday night at the Pete Maravich Assembly Center.

Emmitt Williams had 18 points and 10 rebounds, making 8-of-12 field goals, while Trendon Watford also had 18 points. Charles Manning Jr., who started his third game of the season, scored 13 points on 6-of-8 shooting, while Darius Days posted 12 points and 10 rebounds. Days has been in double figures in all eight games of the season. Also in double figures was Javonte Smart with 12 points and eight assists.

LSU outrebounded the Privateers, 40-30, with a 23-10 advantage in assists. The Tigers had 52 points in the paint and a 20-6 advantage in points off turnovers.

LSU will be off Wednesday and return to practice on Thursday in preparation for the team’s next game on Sunday at 3 p.m. against Northwestern State. The game will be televised on the SEC Network and broadcast on the LSU Sports Radio Network. Tickets are on sale at www.LSUtix.net and online during normal business hours through Friday at the LSU Athletic Ticket Office.

The Will Wade radio show, originally set to begin on Wednesday night will now have its first show on Monday, Dec. 9, at 7 p.m. at TJ Ribs on Acadian Thruway.

The Inside LSU Basketball Television Show will debut this Sunday night on many affiliates of the LSU Sports Television Network and on LSUsports.net/watch.

The December edition of the Tipoff Luncheon presented by UPS at L’Auberge Hotel and Casino Baton Rouge will be held on Thursday at noon CT with Coach Will Wade and special guest former LSU basketball coach and current analyst for the LSU Sports Radio Network, John Brady.

Opening Statement…
“Onto the game, I thought New Orleans played extremely, extremely hard. Coach (Mark) Slessinger does a tremendous job. I thought they played very hard, but they just kind of wore down as the game went on. They’re going to be a very good team in the Southland, which has been tremendous in the non-conference season obviously with Stephan F. Austin (winning at Duke). They’ve had a lot of close calls. McNeese at Texas. Some games like that and New Orleans is going to be right in the mix. Nicholls beat Pittsburgh. I was happy to get the win. I thought we did a good job establishing ourselves in the paint scoring 52 points in the paint. I was really pleased with Javonte. He had 8 assists to two turnovers tonight. The first play turnover was my fault. We were trying to go for an all-or-nothing play on the first and I basically just told him to throw it no matter what. It was my fault. The last two games he’s had 17 assists and only three turnovers. He has been tremendous. Emmitt (Williams) did a great job. We were 15-for-22 in the first half from two so we need to keep feeding those guys and Emmitt was really good. I thought Charles Manning made some big plays for us. I thought the biggest play of the game – we were in the diamond press and Charles chased that thing down from the back side and blocked it in the first half when it was a close game. Overall I was pleased. I thought we practiced well the couple days leading up to this. I thought we played pretty well. It took us a little bit of time to get going, but I thought we played pretty well. They’re a good team. They’re going to win a lot of games in the Southland and they’ll be at the top of the conference. It was a solid win for us.”

On how Javonte Smart is settling in to being the starting point guard…
“I think he’s just settled in. It just takes time. It’s like I told you guys the other day, it took Tremont (Waters) time and Tremont was playing the same position he played the year before.  It’s a different deal with Javonte, but we’ve always had confidence and him and he certainly played very good.”

On the slow start and playing better in the second half…
“It was a slow start. As you can see, basketball is a game of runs. We started off kind of slow, but as you see we sped up.”

On improvement made from last season…
“I try to work on all my game from guarding the ball to being off the ball. I try to come in and watch film. I try to see what I can do to be better.”

On recovering from the slow start…
“The coaches got on us at halftime just telling us to bring the energy. (UNO) was playing tougher than us. So playing tougher, the coaches were harping on that a lot.”

On Aundre Hyatt’s three…
“That was big this game because he is a big part of the team. Just giving him confidence and building his confidence and knowing he can play at this level on the team and help us.”
—
UNO Head Coach Mark Slessinger
Opening statement…
“… I thought that we executed what we wanted to even though we didn’t start as sharp as I wanted to. We left a couple of possessions on the table in the first three (minutes). If we would’ve been sharp and executed, we probably could’ve gotten another bucket or two. Across the board I felt good about the first half minus the last four (minutes). I thought we attacked there but didn’t get a call or two on a couple of goaltendings that caused a four-to-six-point swing. It’d be a two-to-four-point game at the half. When we came out in the second half I thought offensively our game plan was to attack them inside and try to get to the basket and foul line. I thought we did that but it’s unfortunate that we didn’t get to the line. Early on our execution was good. I thought as the half went on our execution waned. We didn’t do the things we were supposed to do. I wasn’t pleased with how in the middle third of the second half that we weren’t playing at the level that we expect. And that is something that I am accountable for. I’ll do everything in our power to make sure that we have that piece corrected. We’ll get there. This was another good game. This (LSU) is a good basketball team. I’m grateful for Coach (Will) Wade bringing us up. I think it’s a great game for us, our fanbase and everybody involved to be here and to get a shot and that it’s good for everybody.

Thoughts on fifth-year senior Jaylen Key…
“I’m really proud of him. He’s kept working. He’s stayed the course. He hasn’t gotten off of what we’re trying to do. From the development with him he bought in. I thank him for trusting me in the recruiting process. This was the vision that I had for him when I was discussing with him during the recruiting process. He said that I was completely honest. I thought that was a great compliment to our staff that we gave him a clear vision what we were going to do, how we wanted him to play. His situation as a fifth-year graduate gives him a very small margin to make a mistake. There’s a lot of trust that goes into it to ensure improvement. I’m grateful for him and his family that they trusted us and understood how we wanted him to play. Again, I’m really proud that he’s continued to get better.”