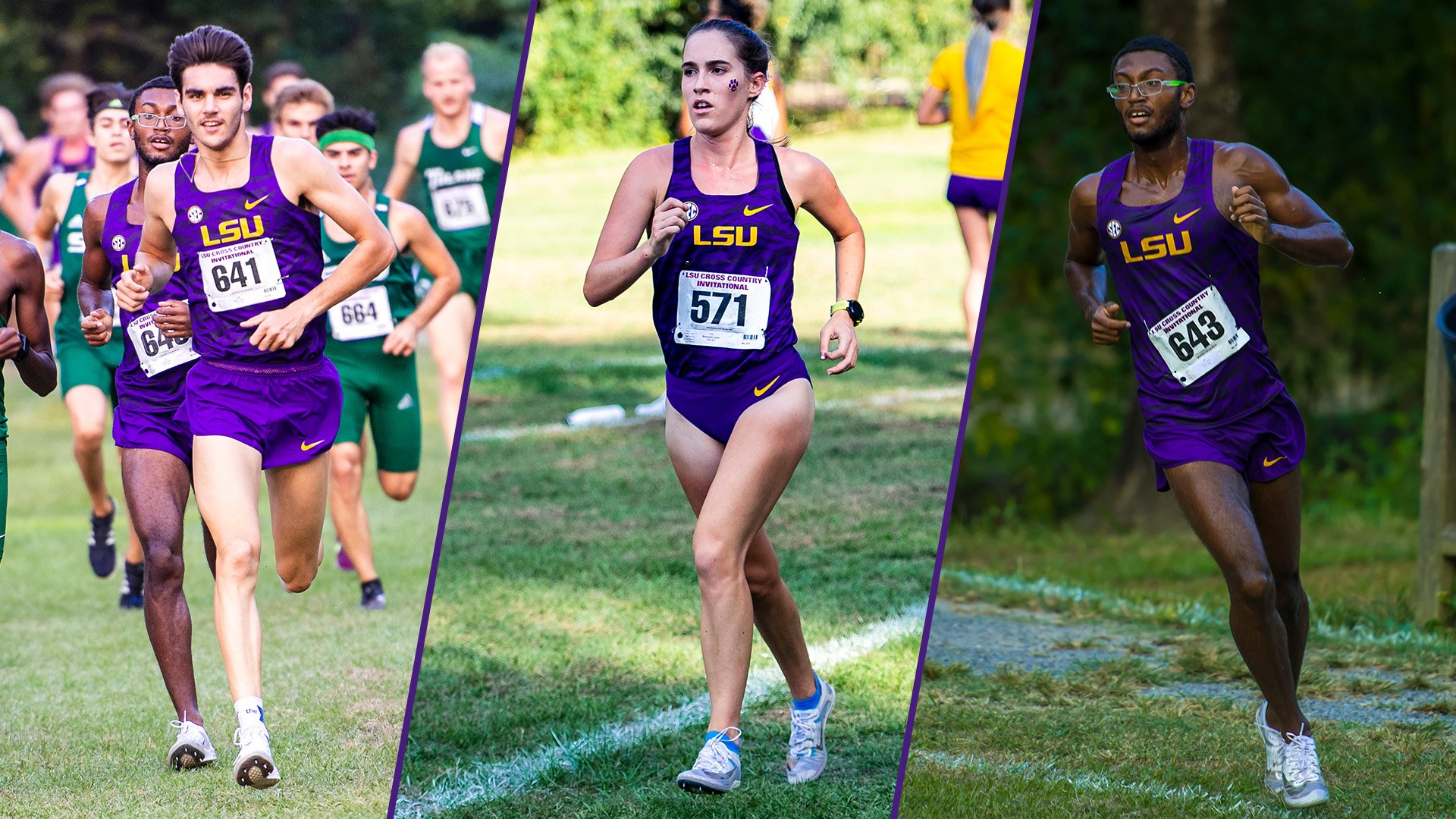 Baton Rouge, La. –  The Louisiana Sports Wrtiers Association 2019 All-Louisiana Cross Country teams were announced Tuesday and the Tigers were well represented on both the men’s and women’s squads. Eric Coston and Davis Bove earned a spot on the men’s team and Katy-Ann McDonald, Alicia Stamey, and Adele Broussard were named to the All-Louisiana women’s team. Coston was named the 2019 All-Louisiana Men’s Runner of the Year and Bove was awarded as the Freshman of the Year.  On the women’s side Adele Broussard was named the Freshman of the Year and head coach Houston Franks earned the honor of Coach of the Year.

The 2019 LSU men’s cross country team was led by junior runner Eric Coston as he was the top finisher for the Tigers in all five meets he ran in this season.  His effort was recognized as he has been named the 2019 All-Louisiana Men’s Runner of the Year.  Coston made his season debut at the LSU Invitational where he was the top collegiate runner, second overall, to finish in the 5k competition (14:49.43) leading the Tigers to a victory.  He led the Tigers in the 8k to their best finish at the SEC Championships since 2007 as he placed 20th with a time of 23:29.9; the men as a team took eighth at the conference meet.  Coston followed up that performance with a 16th place finish at the NCAA South Central Regional, running a time of 30:43.9 in the 10k.  His effort at in the final race of the season was able to lead the Tigers to their best finish at regionals since 2008, an eighth place finish, earning himself a spot on the All-Region team.

Freshman Davis Bove was the second male runner to be named to the 2019 All-Louisiana cross country team and was also named the Freshman of the Year.  Like Coston, Bove made his season debut at the LSU Invitational, placing sixth with a 5k time of 15:15.26.  Bove was awarded with the SEC Men’s Freshman Runner of the Week accolade for his debut performance.  He was able to build off of that week with another scoring performance at the Joe Piane Invitational where he finished in 12th place with a time of 24:38.2 in the five mile run.  Bove was once again named the SEC Men’s Freshman Runner of the Week, becoming the first male runner in LSU program history to win the award in consecutive meets. He earned another accolade at the SEC Championships as he was named to the SEC All-Freshman Team for his 23rd place finish (23:35.6/8k). The freshman wrapped up his season by placing 17th at the NCAA South Central Regional, earning a spot on the All-Region team.

The women’s team also relied on the contributions of a freshman as Adele Broussard was one of the top runners for the Tigers this fall.  Broussard was named the All-Louisiana Freshman Runner of the Year for her impressive debut season.  She competed in all seven meets this season, scoring in five of them making her one of the most consistent runners on the team.  She made her collegiate debut at the McNeese Opener where she placed 17th with a 3k time of 11:24.4.  The freshman’s best finish of the season came in the second meet of the season as she helped lead the Tigers to victory at the Nicholls Invitational by placing fourth with a time of 19:15.0 in the 5k.  Broussard’s next scoring performance came at the Joe Piane Invitational where she crossed the finish line in 75th place with a time of 18:19.07 in the 5k.  The Baton Rouge, La., native followed that performance with another top five finish for LSU in the Arturo Barrios Invitational (6k), placing 136th with a time of 22:51.7.  Broussard was the third finisher for the Tigers in each of the two postseason meets.  She ran through the chute in 105th place at the SEC Championships with a time of 22:36.5 in the 6k.  In her final race of the season, Broussard finished in 82nd place with a 6k time of 23:13.7 at the NCAA South Central Regional.

First year LSU cross country head coach Houston Franks was awarded with the LSWA Women’s Coach of the Year honor.  Franks led the LSU women’s cross country team to consecutive victories at the Nicholls Invitational and the LSU Invitational early on in the 2019 season.  Franks also coached the men’s team to their best finish at the SEC Championships since 2007 (8th place) and their best finish at the NCAA Regionals since 2008 (8th place).

In addition to the award winners, the Tigers had two other runners be named to the LSWA 2019 All-Louisiana Cross team. The top runner for the women’s team this season was sophomore Katy-Ann McDonald who was the top finisher for each of the five meets she competed in. McDonald made her season debut at the LSU Invitational where she claimed an individual victory in the 5k with a time of 17:24.33 and contributed to a team title.  The London, England native registered a fourth-place finish with a 5k time of 17:06.13 at the Joe Piane Invitational. She earned a spot on the All-Region Team with her 14th place finish (21:27.7) in the 6k at the NCAA South-Central Regionals; it was the fourth-highest finish by an LSU individual at the regional meet. Alicia Stamey was another key contributor for LSU this season as she scored in all six races she ran in this season.  In her season debut at the Nicholls Invitational, Stamey placed second overall with a time of 19:08.84 in the 5k leading the team to a victory.  Stamey would help the Tigers win another meet the following week at the LSU Invitational where she finished in sixth place with a 5k time of 18:56.15.

The outlook for the 2020 LSU cross country team looks bright as a plethora of talent will be returning next season.