Kent Lowe to be Inducted into Louisiana Sports HOF 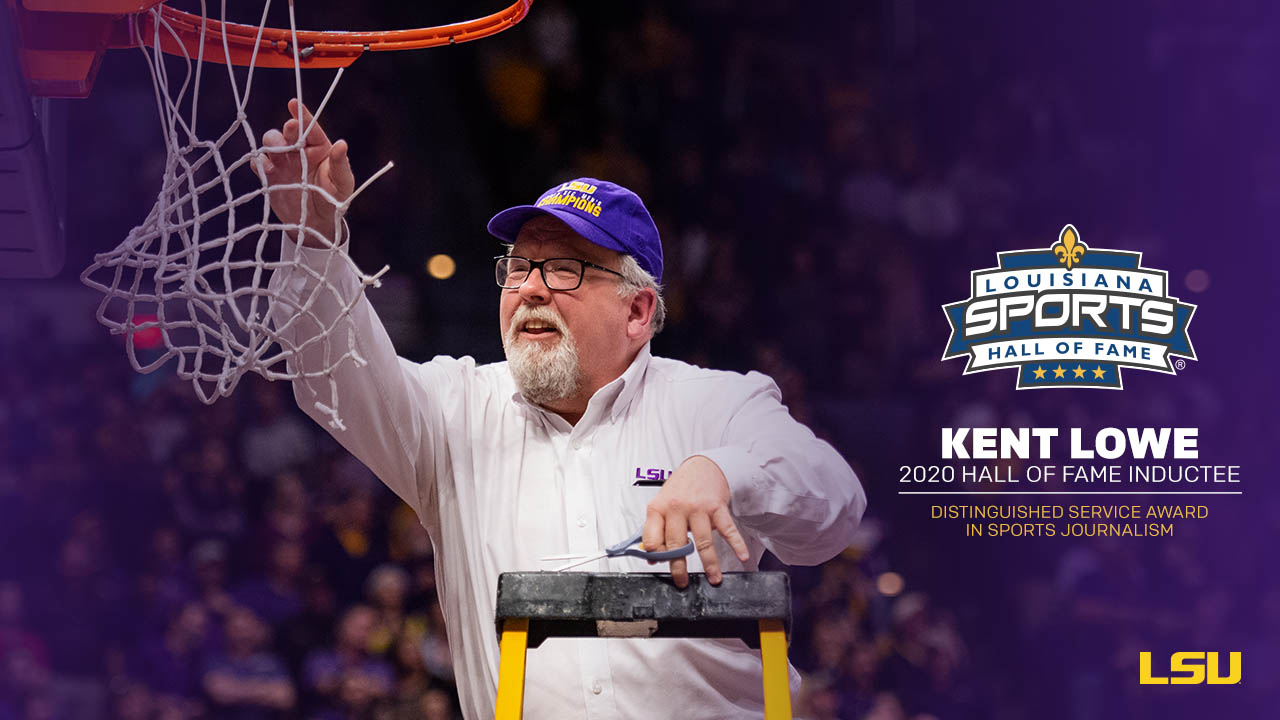 BATON ROUGE, La. –  Kent Lowe, senior associate communications director for LSU Athletics, has been selected for the 2020 Distinguished Service Award in Sports Journalism from the Louisiana Sports Writers Association, and he will be inducted in the Louisiana Sports Hall of Fame next June.

Lowe, a native of Shreveport, La., has worked since 1988 as the communications director for the LSU men’s basketball team, bringing national attention to the program through his innovative media relations strategies.

“I have known Kent Lowe since I was first at LSU many years ago,” said LSU Director of Athletics Scott Woodward. “He has always been a model of skill and professionalism in the industry, and there is no one more passionate about LSU and our student-athletes. He has served LSU with distinction and is incredibly deserving of this honor.”

“I am so happy for Kent and he is very deserving of this honor,” said LSU men’s basketball coach Will Wade. “I can’t think of anyone who loves LSU and Louisiana sports more than Kent. He is an institution at LSU, and I’m happy to call him a colleague and friend.”

Lowe will become the third LSU Athletics communications specialist to be inducted into the Louisiana Sports Hall of Fame, joining former sports information directors Paul Manasseh (inducted in 1982) and Bud Johnson (inducted in 2011).

LSU’s current sports information director, associate athletics director for communications Michael Bonnette, said that Lowe’s career has been marked by an unselfish desire to boost the profiles of Tiger players and coaches.

“I can’t think of a more deserving person for this honor,” Bonnette said. “Kent has dedicated his life to promoting and publicizing sports in Louisiana. Kent’s lifelong dedication to LSU and those he has worked with throughout the years is a testament to the type of person he is.

“He’s never been one to seek the spotlight but has worked long and hard to spotlight those athletes and coaches he’s worked alongside. I’m so happy that for once, the spotlight will shine brightly on Kent and this well-deserved honor.”

The honor, to be made official June 27 in Natchitoches, means that Lowe will be among the elite 12-person Class of 2020 being inducted in the Louisiana Sports Hall of Fame. Lowe was selected from a 24-person pool of outstanding nominees for the state’s top sports journalism honor.

The Distinguished Service Award in Sports Journalism is the most prestigious honor offered to sports media in the state. Recipients are chosen by the 35-member Louisiana Sports Hall of Fame selection committee based on nominees’ professional accomplishments in local, state, regional and even national arenas, with leadership in the LSWA a contributing factor and three decades of work in the profession as a requirement.

In June 2018, Lowe was presented the College Sports Information Directors of America Achievement Award for the University Division (Division I) recognizing his accomplishments in the profession on a national scale. Only one winner is chosen annually.

He has also for the past 26 years written an award-winning bowling column for the Baton Rouge Advocate after writing a bowling column for the Shreveport Times for a decade. In 2018, he was inducted into the Louisiana State Bowling Association Hall of Fame for his service to the sport. He was previously inducted into the Baton Rouge Bowling Association Hall of Fame.

The selection of Lowe and Fambrough was jointly announced Tuesday by Hall of Fame chairman Doug Ireland and LSWA president Lenny Vangilder.

“Robin and Kent are truly transcendent figures in our state’s sports journalism history,” said Ireland. “For better than three decades, they have filled leadership roles in their fields. Robin has been a guiding force in high school sports coverage not only for the Advocate’s readers, but benefitting the LSWA and the LHSAA through her unique roles associated with the organizations.

“On the college level, through Kent’s leadership of the state’s SIDs, All-Louisiana teams, and his influence in the sports information field nationally, and his deep involvement with the LSWA and our annual Hall of Fame induction activities, he has an equally distinctive status.”

The 2020 Induction Class will be showcased in the Louisiana Sports Hall of Fame Museum, operated by the Louisiana State Museum system in a partnership with the Louisiana Sports Writers Association. The striking $23 million, two-story, 27,500-square foot structure faces Cane River Lake in the National Historic Landmark District of Natchitoches and has garnered worldwide architectural acclaim and rave reviews for its contents since its grand opening during the 2013 Hall of Fame induction weekend.

The 2020 Induction Celebration will kick off Thursday, June 25, with a press conference and reception. The three-day festivities include two receptions, a youth sports clinic, a bowling party, and a Friday night riverbank concert in Natchitoches. Tickets for the Saturday night, June 27 Induction Dinner and Ceremony, along with congratulatory advertising and sponsorship opportunities, are available through the LaSportsHall.com website.