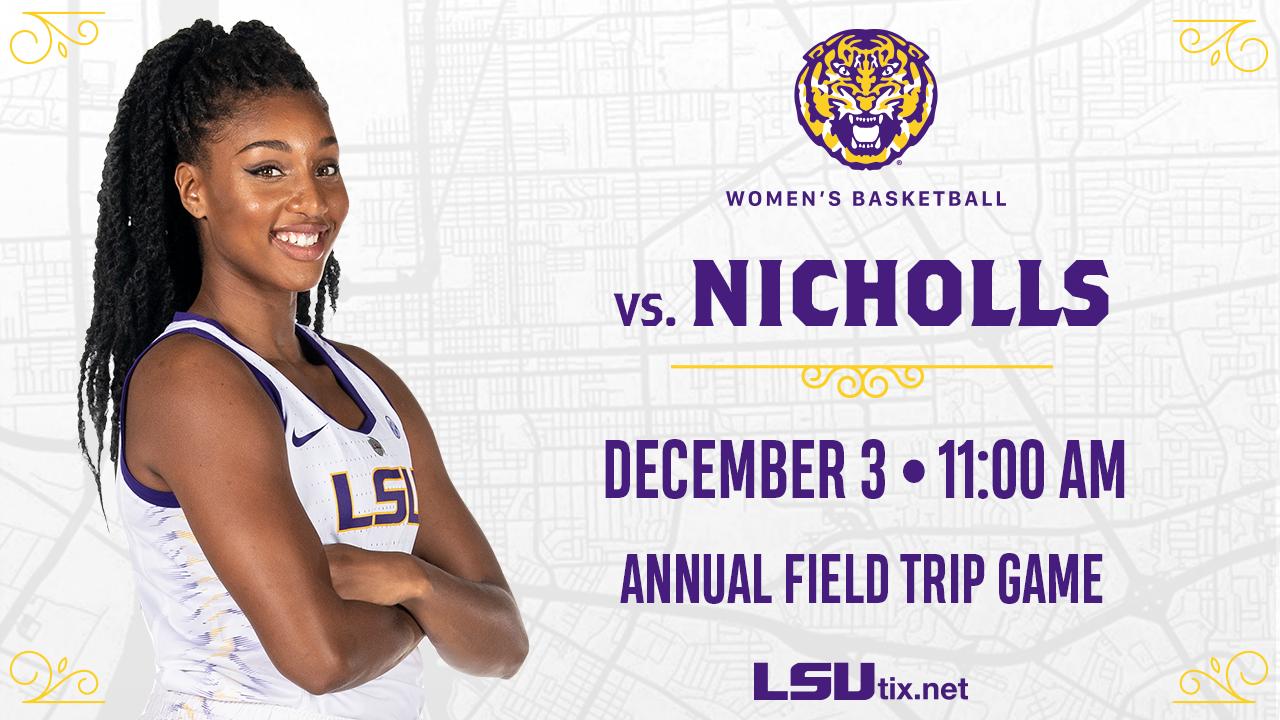 BATON ROUGE – The No. 25 LSU women’s basketball team is hosting Nicholls State in the annual Field Trip Game on Tuesday, December 3 at 11 a.m. in the Pete Maravich Assembly Center. The Tigers are welcoming over 5,000 elementary and middle school students from Baton Rouge and the surrounding parishes to the game.

The game will be live streamed on the SEC Network Plus with Lyn Rollins and Victor Howell calling the action from courtside. Fans can also listen to Patrick Wright and Jeff Palermo call the games on the LSU Sports Radio Network. Wright is in his 30th season as the “Voice of the Lady Tigers”. Fans can listen on 107.3 FM and audio broadcasts are available online at LSUSports.net/live. Live stats will be available at LSUsports.net.

The Tigers are back in the Associated Press Top 25 Women’s Basketball Poll for the first time since the end of the 2017-18 season. LSU was ranked No. 24 in the final AP poll that season.

LSU is now 7-1 with its sixth consecutive victory. It is the first time LSU has started the season 7-1 since the 2013-14 season when the Tigers were ranked in the top 15 and advanced as far as the NCAA Sweet 16.

LSU picked up a big win on Friday against then-No. 15 Michigan State, 58-56, and went on to beat Memphis, 89-58 on Saturday to win the Bimini Division of the Junkanoo Jam. Since the lone loss on the season to now-No. 8 Florida State, LSU has beaten Little Rock, Rutgers and Michigan State, all 2019 NCAA Tournament teams.

Ayana Mitchell, Faustine Aifuwa and Khayla Pointer have become LSU’s Big Three one month into the season. Pointer was named the Most Valuable Player of the Junkanoo Jam and was joined on the All-Tournament team by Mitchell.

Mitchell is on track to become only the fourth LSU player to reach the 1,000 points-1,000 rebounds career marks – currently at 1,081 points and 795 rebounds. She has 31 double-doubles over her career and earlier in the season became the 33rd Lady Tiger to score 1,000 career points. Mitchell played the 100th game of her career against Michigan State on Nov. 29. She is averaging 11.6 points and 8.9 rebounds per game.

Pointer leads the squad from the point with 14.6 points and 3.6 assists per game. She also has the best free throw shooting percentage on the squad at 69.2 and the most steals with 22.

Aifuwa is off to a strong start in the paint for LSU. Aifuwa is second on the team with 13.1 points per game. She is sporting a 64.4 field goal percentage to go along with 6.6 rebounds per game and seven blocked shots.

LSU continues its solid play on scoring defense, holding teams to 55.9 points per game, ranked 45th in the nation. The Tigers have held two opponents to 50 points or under twice and six opponents under 60 so far this season, all victories.

Nicholls State is 2-5 on the season, coming up short in the Jacksonville Thanksgiving Classic against Jacksonville and North Florida over the weekend. Senior Airi Hamilton and sophomore Adrian Mann are averaging 11.6 and 11.4 points per game, respectively. Colonels head coach DoBee Plaisance is the mother of LSU legend Theresa Plaisance and recently won her 300th game at NSU.

On how the Bahamas trip went…

“It was nice. It was a good trip. It was good competition and good opportunities for these student-athletes to experience something other than their own communities. To be able to have an institution that allows your student-athletes to travel and go to a beautiful place like the Bahamas, but also understanding what just happened to the Bahamian community and how they’ve all rallied around each other. It had a special meaning for our team. We were extremely excited about the fact that we were able to showcase Ayana Mitchell and Faustine Aifuwa, two of the best post players in the country, and Khayla Pointer, one of the best floor generals in the country, and the amazing supporting cast that would not allow us to leave there without coming away with two victories.”

“I’ve been challenging the bench. This game is played for forty strong minutes and the teams in the past that have gone far in the (NCAA) tournament have had bench play. We’re just trying to get ours ready. If you told me that we weren’t going to have Ayana Mitchell for a whole half against Michigan State, I would’ve had to say that we would’ve had to slow the ball down and milk the clock, but we were able to put in players that made big plays for us. They were able to play against a Michigan State team that’s a veteran squad and an unbelievable talent, but the fight of the Lady Tigers was pretty impressive. Even though we were down, we figured out a way to come back, and that’s a test to their character, how resilient they are and how much passion they play with.”

On effects on Michigan State in the second half…

“I challenge our team every game. Our defensive goal is to hold our opponent to 55 points or less. In the first quarter, we gave up 16 points and that was too many points, but in the second half we only gave up 17 points. We took the defensive assignments a little more serious. Ayana Mitchell was back and we had her for the full second half. Defensively, we went to our full-court pressure and I felt like that got us going. Not only from a transition standpoint of turning them over and disrupting their two star players on the perimeter, but we were able to then go into that third quarter, tie in the fourth quarter and then from there we were able to take a little lead and never look back.”

On how Nikki approaches being back in the Top 25…

“I’m sure they know with social media, but to me polls and rankings and things like that, it’s really where you’re at in the end. I think that’s the most important part and we want to make sure that they know what our destination is. I appreciate the committee recognizing the body of work that this group has done thus far but there is still more work to come. For them to understand that just because you have a number in front of your name, doesn’t eliminate what we have to do. We still have to go out and roll our sleeves up because we are LSU and there’s still going to be a target on your back. To have that recognition, like I said, is great, but I want us recognized later for March Madness and down in New Orleans. That’s me as the coach, but I do appreciate the young ladies being recognized for what they’ve down right now.”

LSU travels to Norman, Oklahoma on Saturday to face Oklahoma in the 2019 Big 12/SEC Challenge. Game time is set for 3 p.m. CT and will be broadcast on FOX Sports-Oklahoma.

Fans can purchase tickets for the next home game, Dec. 28 vs. Florida A&M, at LSUtix.net. The SEC Pack is a mini-plan that features all eight home SEC games for $60.