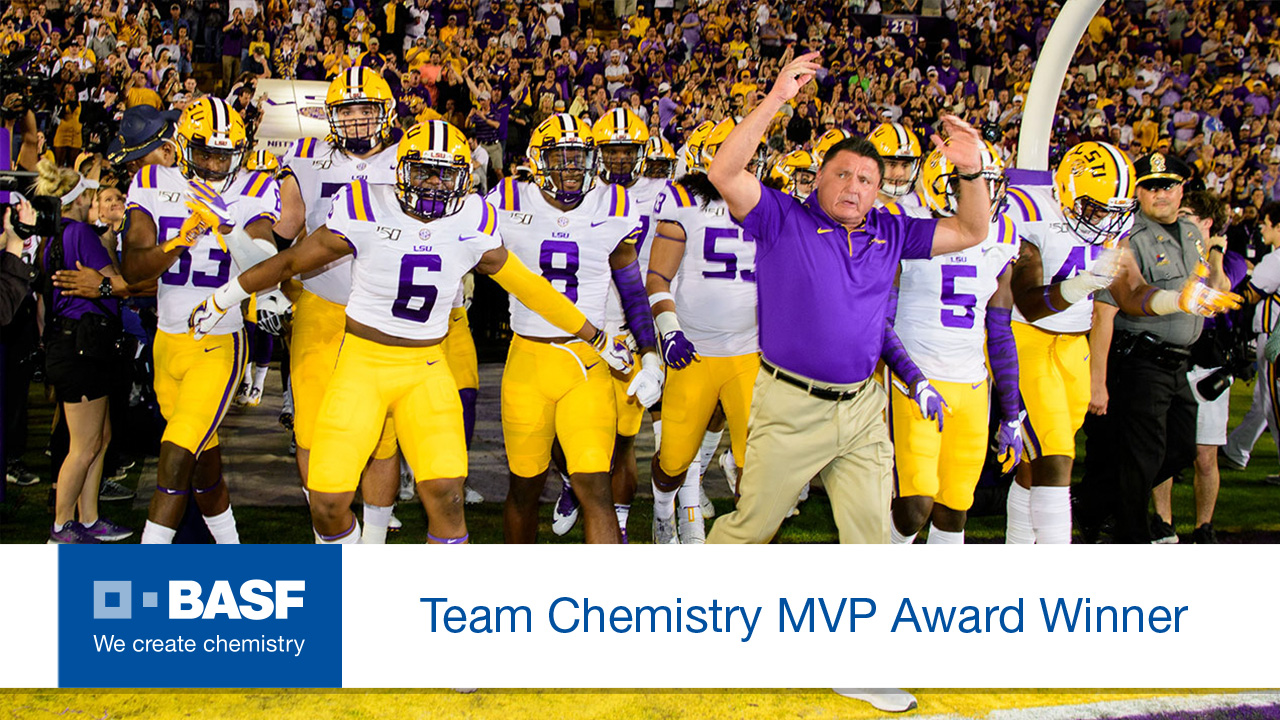 Baton Rouge, La. – The LSU football team put the finishing touches on an unblemished regular season in the month of November and that has earned them BASF Team of the Month honors.

The Tigers capped off a 12-0 regular season with a 50-7 win over Texas A&M on Saturday night. Other wins in the month of November came against No. 2 Alabama (Nov. 9), Ole Miss (Nov. 16), and Arkansas (Nov. 23). Up next for the Tigers will be a showdown with Georgia in the SEC Championship game on Saturday, Dec. 7, in Atlanta, Ga.

LSU’s 46-41 win over Alabama on Nov. 9 kicked off the month in fine fashion. The Tigers stormed into Tuscaloosa, and on the heels of exceptional performances by Joe Burrow and Clyde Edwards-Helaire, came away with a five-point win to end Alabama’s 31-game home winning streak. The Tigers were in charge all night as they never trailed, and built a 33-13 halftime lead. Burrow threw for three touchdowns and Edwards-Helaire scored four times himself. Three of Edwards-Helaire scores came on the ground, his last one a game sealing seven-yard TD run with less than two minutes to play in the game. Burrow closed the night with 393 yards passing (31-of-39). LSU’s defense forced two turnovers in the game including a pick by Patrick Queen with less than 30 seconds remaining in the first half. Queen’s interception setup Burrow’s 13-yard touchdown pass to Edwards-Helaire with six seconds remaining on the clock in the first half.

The LSU offense starred in the Tigers’ 58-37 win over Ole Miss on Nov. 16 in Oxford. Burrow became LSU’s single-season passing record holder and tossed five touchdowns in the game; Burrow completed 32-of-42 attempts on the evening for a career-high 489 passing yards. Those 489 passing yards helped him break Rohan Davey’s single season yardage record of 3,347 yards that he set in 2001. Burrow completed 17-straight passes to set a school record for most-consecutive passes completed. He linked up with Ja’Marr Chase and Justin Jefferson all night long as both the receivers eclipsed the 1,000-yard mark in the game. Jefferson hauled in nine catches for 112 yards (2 TDs) and Chase had a gaudy eight receptions for 227 yards (3 TDs). The Tigers piled up 714 yards of offense on the evening, which was the second most in school history and the most against an SEC opponent.

The Tigers ran away with victory against Arkansas on Nov. 23 with a final tally of 56-20. LSU led 7-6 after a 47-yard field goal by Arkansas midway through the second quarter, and that’s when the Tigers rattled off 49-unanswered points to storm away from the Razorbacks. Edwards-Helaire was as efficient as could be with 188 yards rushing on six carries for three touchdowns, one of which was a career long 89-yard touchdown run. With his performance, Edwards-Helaire became the 14th Tiger to eclipse the 1,000-yard rushing barrier.

The Tigers triumphed in impressive fashion to close out the regular season against Texas A&M with a 50-7 drumming of the Aggies; it was the largest win by LSU in series history. Burrow posted 352 yards through the air on 23 completions to make him the SEC single season yardage record holder with a total of 4,366 passing yards on the season. He added three touchdowns passing to tie Drew Lock (Missouri – 2017) for most passing touchdowns in a season by an SEC quarterback with 44 on the 2019 season. Ja’Marr Chase had seven receptions for a total of 197 yards and two touchdowns. The LSU defense forced Texas A&M quarterback Kellen Mond to throw three picks in the game – interceptions were made by Kary Vincent Jr., Grant Delpit and Jacoby Stevens. The LSU defense only allowed 169 yards on the game as the Tigers nearly outgained the Aggies by 400 yards.