Congenial O-Lineman is All Business on the Field 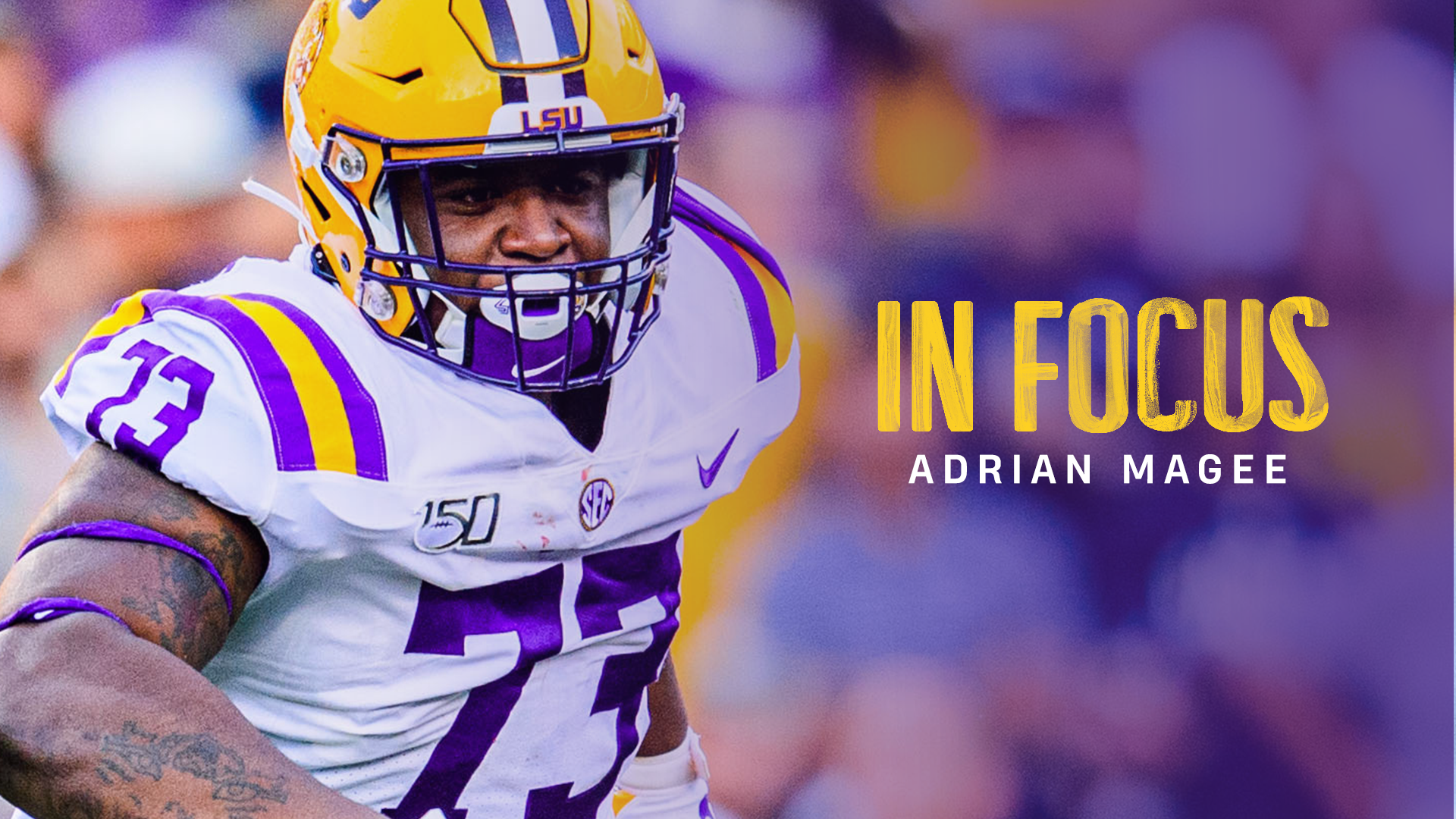 Adrian Magee has been waiting for this moment. After being a spot starter in his last three seasons at LSU, he’s earned his respect on the offensive line, and he’s not going to give it up any time soon.

Magee played in 11 games his sophomore season and 10 in his junior season, adding on four starts, but he wanted more. He wanted to be permanently on the line, not situationally.

Magee went into his senior season on the outside looking in — a feeling he was all too familiar with. Sophomore offensive guard Chasen Hines, who was dealing with injuries during Fall camp, was healthy to start the season. With speculation about who would be the starter, that only pushed Magee harder.

Competition is something this versatile veteran feeds off of. When asked about Ed Orgeron‘s Competition Tuesdays, his eyes gleamed.
“Competition Tuesdays, man… That’s me going against the same guy someone else is going against and me making sure I dominate that guy and him losing the battle. It’s basically a game, we’re giving our all. Rashard [Lawrence] helped me out a lot this year. He’s given me the best looks I can get, and it helped tremendously,” Magee said.

Magee’s work paid off, as he saw himself in between center Lloyd Cushenberry and left tackle Saahdiq Charles on the first snap in the season opener against Georgia Southern, but he knew that spot wasn’t guaranteed. He finally got his opportunity and wasn’t going to let it go.

Magee was the starting left guard for the next three weeks but was met with another challenge. Before the Week 4 game against Vanderbilt, Magee recalls the moment Ed Ingram was reinstated to the team. He vividly remembers Coach Orgeron saying Magee’s spot at left guard was not guaranteed.

“I try not to pay attention to the media, but I get alerts to my phone, that caught my eye. It didn’t hurt though, it was expected. I thought to myself, ‘If he’s going to get that spot, I’m going to make sure he earns it,'” Magee said.

Magee kept his word— and happened to go viral doing it. Search ‘Adrian Magee’ on Google. Linked right above his viral video where he deadlifted 605 pounds, is another where Magee uprooted two Vanderbilt defenders on the same play. He recognized the twist from the blitzing linebacker and buried him into the turf. That itself was highlight-worthy, but as Joe Burrow scrambled outside the pocket, Magee saw one more Vanderbilt defender shed a block. Magee buried him into the turf.

“That wasn’t expected at all, but it was fun doing it. The funny thing is, I don’t even remember that play. I kind of clicked out after I pancaked the first guy. I stood there like, “Oh wow …” And then I clicked back in and that’s when I hit the other one,” Magee said.

If there was any debate on his spot being given up, he buried that discussion into the turf, just like the two defenders in Nashville.

Magee has started all 11 of the Tigers’ games this year.

Outside of protecting Joe Burrow, the senior puts it on himself to keep the offense in an upbeat mood. His teammates have crowned him as the team prankster. From untying someone’s shoe during a water break, to whatever Garrett Brumfield meant when he called him a “big Saran Wrap guy,” Magee knows how to make people laugh. He feels he plays better when he’s joking with his teammates and not letting the game overwhelm him.

He can feel a new energy with this 2019 LSU team. A bond that hasn’t always been there, now bonds them together as they rally around one goal, a National Championship. Everyone has bought into Coach O’s ‘One Team, One Heartbeat’ motto.

“This team we have now, we are literally giving it our all,” Magee said.

While Magee and the Tigers are focused on their one objective, he can’t help letting his lighthearted attitude shine. He fights a battle with, “The Fat Club,” short for players that need to have their weight watched by the trainers— A group he was a part of his freshman season.

In recent times, he’s been considered a graduate of the club. However, currently, Magee weighs 337 pounds, which is too high for him. He’s had to keep his pranks to a minimum this week, so he doesn’t get clowned for being over his ideal weight.

“The Fat Club, man. I think I moved back in it. I got to get back out of there. I have to keep the jokes to a limit this week because I’m pretty heavy. Holla at me after I push the sled for a few days, I might have a good joke for you,” Magee said.