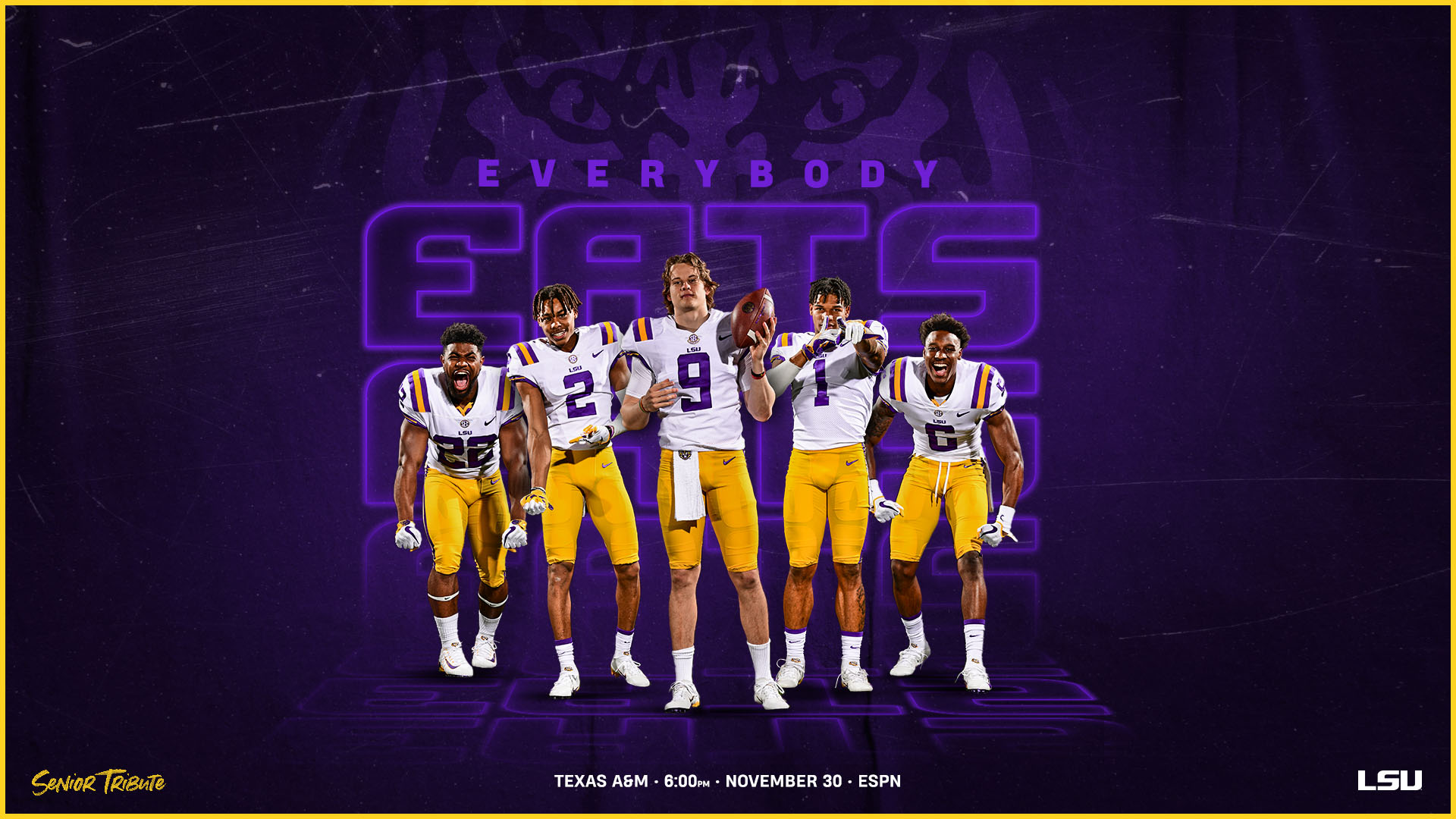 No. 1 LSU is set to wrap up the 2019 regular season and honor its seniors in their final home game, as the Tigers take on Texas A&M on Saturday in Tiger Stadium.

Kickoff is scheduled for 6 p.m. on ESPN and the LSU Sports Radio Network.

LSU (11-0, 7-0 SEC) looks to close out the regular season undefeated for the first time since 2011 while winning their seventh game in eight matchups with the Aggies (7-4, 4-3 SEC) since they joined the conference in 2012. Texas A&M knocked off LSU 74-72 in seven overtimes last year, but the Tigers will be focused on finishing the job this year.

“They’ve got good players,” said head coach Ed Orgeron, who is 36-9 as LSU’s head coach. “This is going to be a big challenge for our team, and we have to take the emotions out of last year, focus in on this year. This is a different football team. We’re playing them at home. We’re going to have to play a complete game to win this game.”

Offensively, LSU continues to re-write the record books weekly. Quarterback Joe Burrow, the Heisman Trophy favorite, is the first quarterback in SEC history with 4,000 yards and 40 touchdowns in a season. The new single-season yards and touchdowns leader in school history, Burrow (4,014 yards) is less than 300 yards from breaking Tim Couch’s SEC leading mark of 4,275 yards set in 1998 and three touchdowns away from tying the SEC mark of 44 touchdown passes set by Drew Lock in 2017.

At receiver, LSU is led by Biletnikoff Award finalist Ja’Marr Chase (63 rec., 1,260 yards, 15 TDs), who owns the school record for touchdown receptions in a season, and Justin Jefferson (75 rec., 1,037 yards, 12 TDs). Tight end Thad Moss (32 receptions, 423 yards) set a new school mark for catches by a tight end, and is less than 20 yards from setting the record for yards.

Running back Clyde Edwards-Helaire eclipsed the 1,000 yard mark this season and leads the SEC with 15 rushing touchdowns. The junior from Baton Rouge has rushed for more than 100 yards in six of LSU’s seven SEC games.

The LSU offensive line is one of ten finalists for the Joe Moore Award, given annually to the best offensive line in the country. Center Lloyd Cushenberry and guard Damien Lewis lead the charge for the first offense in SEC history with a 4,000 yard passer, two 1,000 yard receivers, and a 1,000 yard rusher.

“When we got hired, this was the offense we wanted to bring to LSU,” Orgeron said. “It took a while. But we’re proud of Steve Ensminger, Joe Brady the whole offensive staff and what they’re doing.”

LSU’s defense is led by its two dynamic safeties, Thorpe Award finalist Grant Delpit and three-time SEC Defensive Player of the Week JaCoby Stevens, who is coming off a three-sack outing against Arkansas last week. He leads all SEC safeties in sacks, pressures, and tackles for loss.  Linebacker Jacob Phillips is second in the conference with 8.5 tackles per game, and no Power 5 linebacker has missed fewer tackles (2). Freshman cornerback Derek Stingley leads the SEC in passes defended (17) and is tied for the lead league in interceptions (4).

With the senior tribute set for pregame and a rivalry matchup set for the 60 minutes to follow, Orgeron expects a big crowd as the Tigers look to wrap up the SEC slate undefeated and march into the SEC Championship next week with an unblemished record.