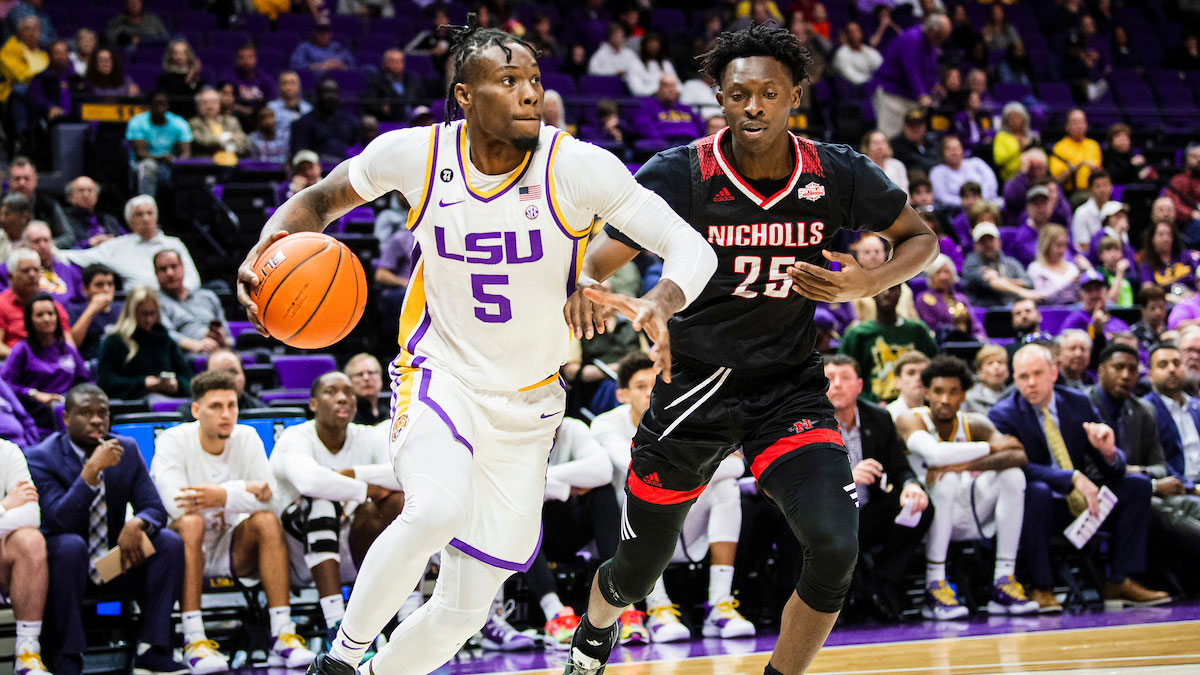 MONTEGO BAY, Jamaica – A strong 40-minute performance propelled the LSU Men’s Basketball team to a 96-83 victory over Rhode Island in the final game of the Jersey Mikes Jamaica Classic on Sunday.

LSU improved to 4-2 on the season and Rhode Island dropped to 4-2.

The Tigers will return to the Pete Maravich Assembly Center on Friday, Nov. 29 at 7 p.m. CT to square off against Missouri State. Tickets are available on LSUtix.net now, and Monday through Wednesday at the LSU Athletic Ticket Office during normal business hours.

“I thought we played extremely, extremely hard and we got contributions from everybody,” said LSU head coach Will Wade.

Forward Emmitt Williams recorded 27 points on 12-of-17 shooting to set a career-high. He added nine rebounds, including five of LSU’s 12 offensive rebounds that led to 16 second-chance points.

Forwards Trendon Watford and Darius Days each scored 16 points for LSU. Days added nine rebounds and hit two three-pointers, while Watford hit one from behind the arc and finished with six boards.

“We’ve got to keep playing inside-out like that, attacking the paint,” said Wade whose team had 54 points in the paint on Sunday. “We did a much, much better job of that today.”

The guard pair of Skylar Mays and Javonte Smart finished with 14 and 11 points, respectively. Each had six assists.

The LSU Tigers made 30-of-50 shots inside the arc and scored 53 second half points to break open the contest before a near full house at the Montego Bay Convention Centre.

LSU had 19 assists on the 38 made buckets. The Tigers were headed to a single-digit turnover game before three miscues in the final minute with the game salted away. LSU finished with a season-low 11 turnovers.

LSU took a 43-39 lead into halftime and came out in the second half to finish the job. A jumper by Rhode Island’s Tyrese Martin with 17:28 left in the game made it a one-point game but that was as close as the Rams would get it as LSU was able to build its lead up and never look back.

A layup from Watford with 12:06 left to play gave the Tigers their first double-digit lead of the game. For next seven minutes LSU’s lead jumped back and forth between double and single-digits, never dipping lower than seven points after Mekhi Long sunk a free-throw.

Williams, who recorded 14 of his 27 points in the second half, hit a jumper in the paint with 4:55 remaining to make it a double-digit lead for good as LSU held firm in the final five minutes building as much as a 19-point advantage with less than 90 seconds to play.

LSU dominated the on the glass, 41-28, with 12 offensive rebounds (nine in the second half) that lead to 16 second chance points.

“We’re offensive rebounding almost 51-percent of our misses on the year,” said Wade. “Get the thing on the backboard and let our guys go eat.”