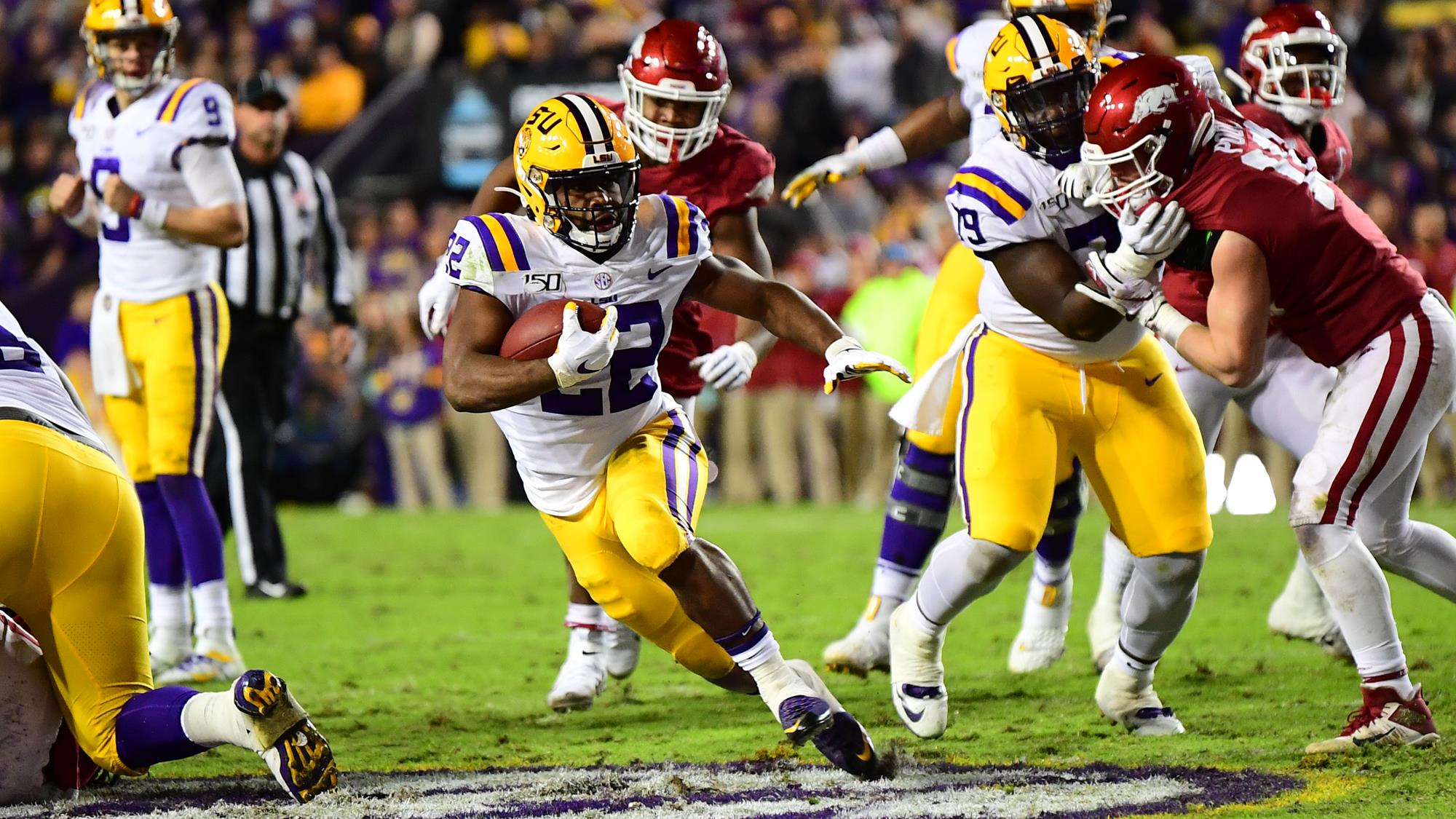 LSU, 11-0 for the third time in school history (1958, 2011), improved to 7-0 in SEC play and earned a berth in the Dec. 7 SEC Championship game against Georgia. Kickoff will be at 3:10 p.m. CT in Atlanta’s Mercedes-Benz Stadium. LSU has sold out of its ticket allotment for the game. Fans are encouraged to use the official marketplace to buy and sell tickets at www.LSUsports.net/marketplace.

The Tigers scored eight touchdowns, with each scoring drive lasting less than 2:30. In the third quarter, LSU needed only four plays to score three touchdowns in a five-minute span, ultimately turning a 7-6 advantage early in the second quarter into a 56-6 runaway only eight seconds into the fourth quarter.

In 2 1/2 quarters of action, LSU senior quarterback Joe Burrow completed 23-of-28 passes for 327 yards and three touchdowns, including a 50-yarder to wide receiver Ja’Marr Chase on Burrow’s final play of the contest with 7:48 left in the third quarter.

Chase led the Tigers with six catches for 144 yards, while running back Clyde Edwards-Helaire continued to show off his versatility. The Doak Walker Award semifinalist and Hornung Award finalist had seven catches for 65 yards – all in the first half – and ran only six times for 188 yards and three touchdowns.

Needing one yard for 100 on the evening, he took advantage of his last touch of the game, sprinting through the line, down the right sideline, eluding a tackler at 25, and high-stepped for an 89-yard touchdown. It was the fifth-longest rushing touchdown in LSU history.

Defensively, LSU had 11 tackles for loss including four by safety JaCoby Stevens, who had all three of LSU’s sacks. Linebacker Jacob Phillips led the Tigers with 12 tackles, as LSU played without safety Grant Deplit.

Arkansas (2-9, 0-7 SEC) was led by starting quarterback KJ Jefferson, who finished 7-of-14 passing for 105. Rakeen Boyd led the Razorbacks on the ground with 33 yards on 13 carries.

Arkansas got on the scoreboard with 3:39 left in the first period, moving 49 yards in seven plays and completing the march with a 24-yard field goal by Connor Limpert.

The Razorbacks narrowed the deficit to 7-6 with 9:43 remaining in the second quarter when Limpert connected on a 47-yard field goal at the end of a 32-yard, 10-play drive.

LSU answered quickly, rolling 75 yards in six plays and taking a 14-6 lead on a two-yard TD burst by running back Tyrion Davis-Price. The drive was highlighted by two Burrow passes to tight end Thaddeus Moss covering 20 and 30 yards, respectively.

After the Tiger defense forced a three-and-out on the next Arkansas possession, LSU surged 62 yards in five plays, extending the lead to 21-6 on a 27-yard TD dash by running back Clyde Edwards-Helaire at the 3:17 mark of the first half.

LSU limited the Razorbacks to another three-and-out, and the Tigers drove 90 yards in nine plays to take a 28-6 advantage 14 seconds before halftime. The scoring play was a 10-yard strike from Burrow to wide receiver Justin Jefferson.

Midway through the third quarter, LSU covered 85 yards in two plays to increase its lead to 35-6. The first play was a 35-yard sprint by Edwards-Helaire to midfield – the carry gave Edwards-Helaire over 1,000 yards rushing for the season – followed by 50-yard TD aerial from Burrow to Chase, allowing Burrow to eclipse the 4,000-yard passing mark for the season.

Burrow became the first quarterback in LSU history to pass for 4,000 yards in a season. He is the fourth SEC quarterback to record 4,000 yards and the first since Chad Kelly of Ole Miss threw for 4,402 in 2015. The SEC record for single-season passing yards is 4,275 by Kentucky’s Tim Couch in 1998.

The 1,000-yard season for Edwards-Helaire is the 21st in LSU history, and the Tigers have had a 1,000-yard rusher in each of the past seven seasons.

LSU became the first team in SEC history to have a 4,000-yard passer (Burrow), a 1,000-yard rusher (Edwards-Helaire) and two 1,000-yard receivers (Chase and Jefferson) in the same season.

Edwards-Helaire scored his second rushing touchdown of the game with 5:47 left in the third quarter on a 26-yard dash. The TD came on the first play of the drive, which was set up by a 15-yard penalty on the Arkansas punt team for fair-catch interference.

On their next possession, the Tigers again needed just one play to reach paydirt, as Edwards-Helaire raced 89 yards down the LSU sideline and into the South end zone. The run, which gave the Tigers a 49-6 with 2:46 left in the third period, was the fifth-longest TD rush in LSU annals.

Arkansas scored twice without giving up possession in the fourth quarter, as Jack Lindsey completed a 24-yard touchdown pass to Mike Woods with 8:35 to play. After multiple deflections, the Razorbacks came up with loose ball on the onside kick at the LSU 11. Three plays later, Devwah Whaley ran for a 2-yard score to trim the deficit to 56-20 with 7:02 left.