Business as Usual for Tigers, Who Now Have Unfinished Business in Mind 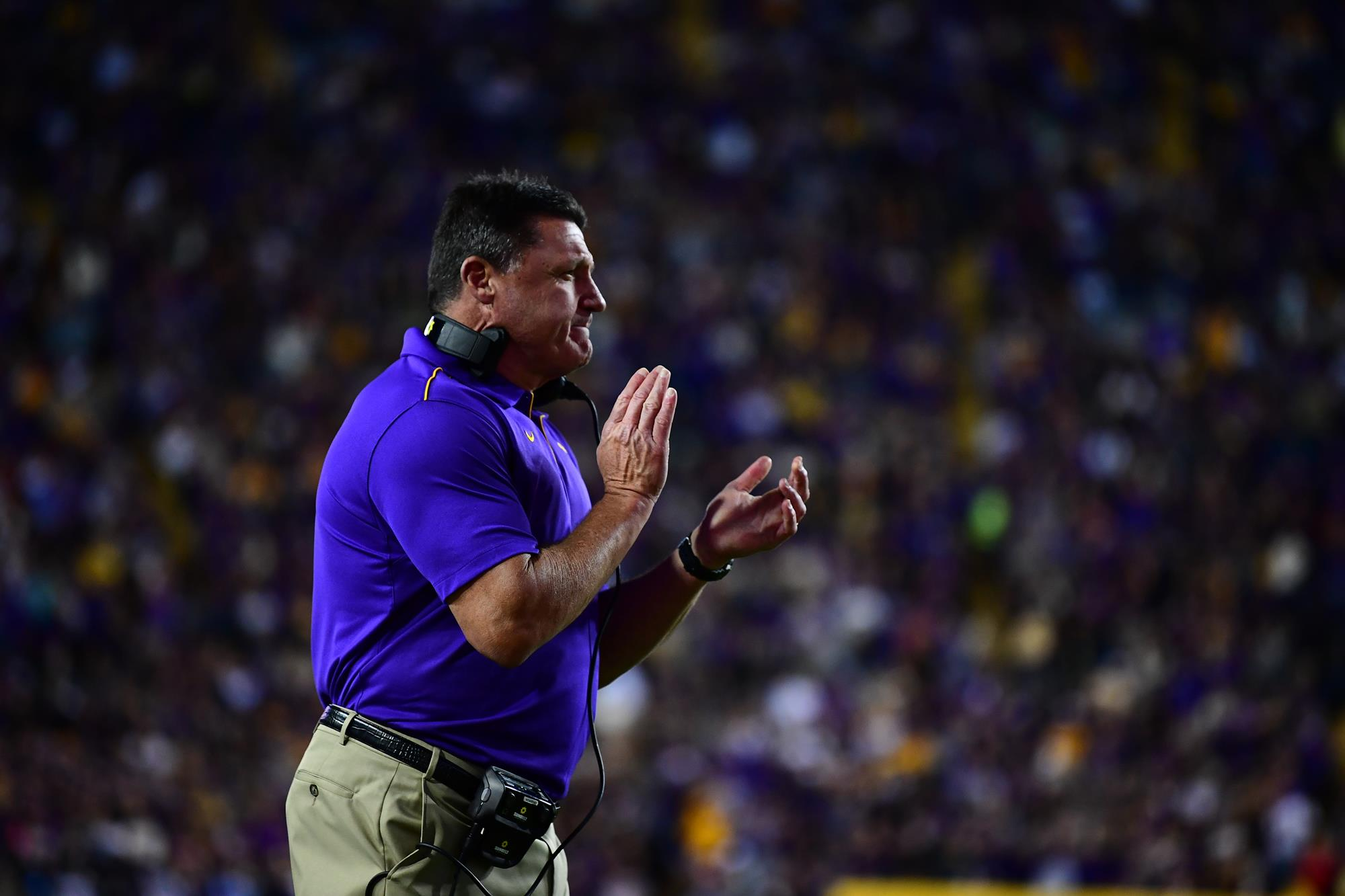 There was much to celebrate in Tiger Stadium Saturday night – and few on the field celebrating it.

“Business as usual,” Burrow deadpanned after the game. “It was never our goal this year to win the West. We’ve got more goals ahead us.”

Fine. Burrow is both the most celebrated player on the team and the least likely to celebrate a win. Surely, Ed Orgeron was thrilled to claim the West and The Boot in the same night.

“There will be no celebrating tonight,” Orgeron said. “It’s not done yet. We’re not done yet. Obviously, it’s a goal of ours. But we have bigger goals.”

“The Los Angeles Lakers, they don’t hang up divisional banners,” LSU’s center said. “They hang up NBA Championships. We have bigger goals. This is just one step.”

In the moments after winning the West and re-writing the record books, again, LSU wasn’t in much of a celebratory mood – though there was some cause for smiling.

Take Edwards-Helaire, who finished his night with a career-long 89-yard touchdown run. He wasn’t even supposed to be in the game at that point, with the Tigers in full control of the contest, ahead 42-6.

But the coaches noticed a statistical anomaly: Edwards-Helaire was one yard shy of 100, and he’d already rushed for at least that many yards in five of six SEC games.

“I think I was pretty much done at that moment, and then they were like, ‘Man, you need a yard to get to get 100 yards,'” Edwards-Helaire said. “So I went in, and it was like, ‘Look, get the yard, come get out of bounds, and we’re going to shut it down for the game,’ and man, it parted like the Red Sea.”

Edwards-Helaire did the rest, capping off his night with just six carries and an incredible 188 rushing yards.

“Everybody’s talking about breakaway speed,” Edwards-Helaire said, a nod to critics of his ability to finish runs in the open field. “I hope that was fast enough for everybody.”

Orgeron and Burrow celebrated Edwards-Helaire’s success, but little else. The tone from the head coach and his players was stoic. They projected a sense of hunger, just moments after feasting.

Starting Saturday. Orgeron implements a mandatory 24-hour rule for his team – players are supposed to enjoy the win for that entire period, then return to work Monday ready to fix Saturday’s mistakes and start moving on to the next Saturday.

That rule is still in place this week, and it won’t be broken.

“Immediately after the game, it was like, it’s already redemption time as far as next week,” said Edwards-Helaire, a nod to LSU’s matchup with Texas A&M to close the regular season. “The gear’s already switched. That’s how it’s been every week. We owe those guys a lot from last year.”

You remember last year, don’t you? LSU lost in seven overtime to A&M, 74-72, on a game that only went to extra time after several controversial calls went against the Tigers.

“There’s nothing we could do at the end of [that] game,” Orgeron said Saturday night “We felt helpless. But there’s something we can do about it this week.”

Burrow, in particular, took the A&M loss hard. Physically, he was exhausted, after 36 passing attempts and 29 rushing attempts. After six touchdowns and seven overtimes. After several hours of play and one, gut-wrenching defeat.

“Excited for Saturday,” Burrow deadpanned, asked about the re-match.

Why? a reporter asked.

“Chance to go 12-0,” Burrow fired back, before uncorking a knowing grin and taking a large sip from his water bottle.

Joe Burrow is “excited for Saturday” vs. Texas A&M.

A win would cap off a perfect regular season. It would position LSU to enter the SEC Championship Game in Atlanta unblemished and in control of their quest for the No. 1 seed in the College Football Playoff and the best path toward the national title.

But that’s not all it would mean. And no one is pretending otherwise.

Business as usual. Unfinished business, to be specific.