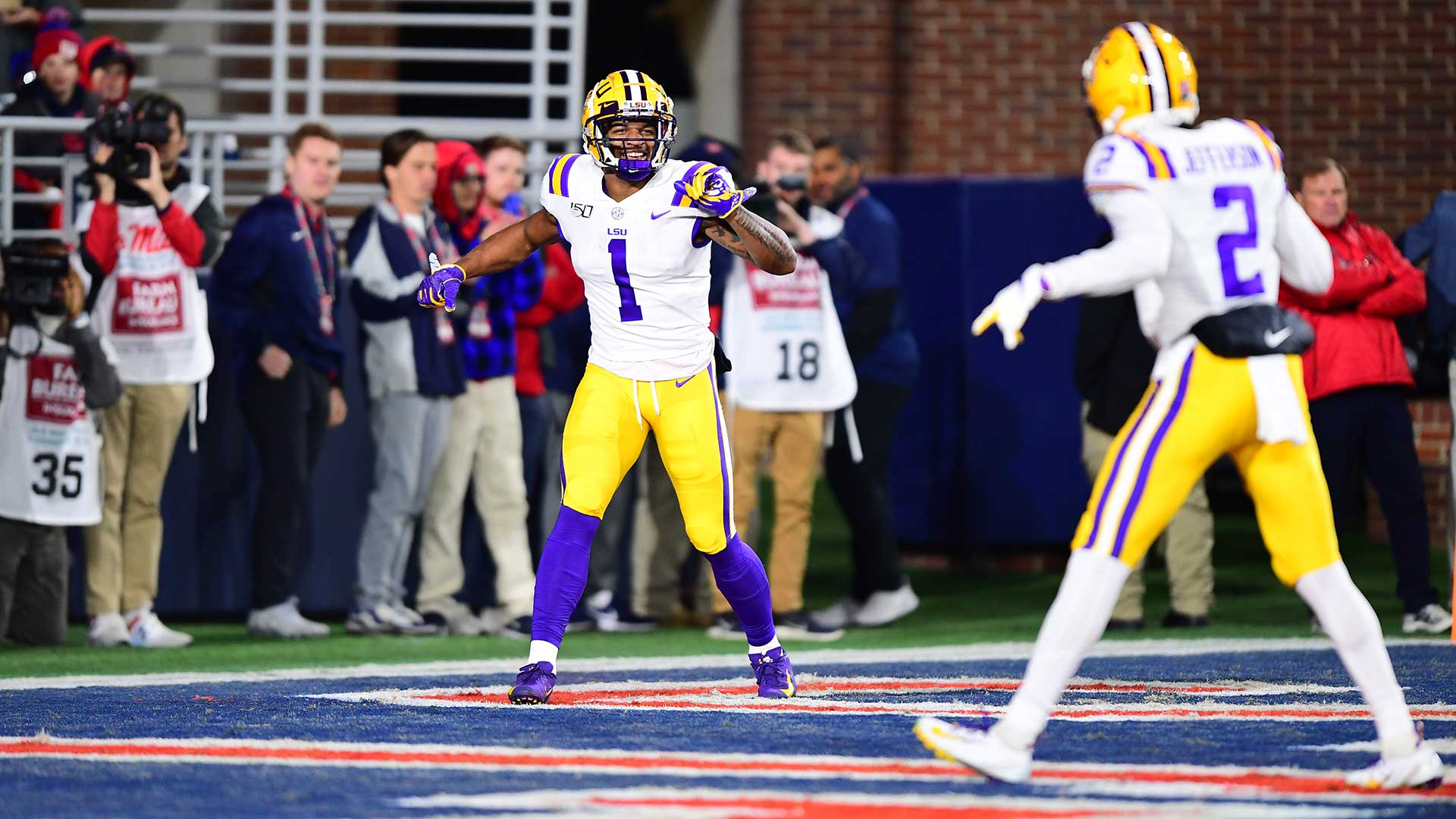 LSU (10-0, 6-0 SEC) returns home to face Arkansas on Nov. 23 at 6 p.m. with a chance to secure a berth in the Dec. 7 SEC Championship game with a victory. Tickets are available now at LSUtix.net.

Burrow, who had the second-most yards in game in LSU history, saw his favorite targets – wide receivers Ja’Marr Chase and Justin Jefferson – each eclipse 1,000 yards on the season during the contest. The duo became the third in SEC history to reach the milestone, joining LSU’s Jarvis Landry and Odell Beckham Jr. in 2013, and Florida’s Jabar Gaffney and Reche Caldwell in 2001.

Burrow completed a school-record 17-straight passes – including his last 16 of the first half – for 244 yards.

Running back Clyde Edwards-Helaire added his third-straight 100-yard game with career-best 172 yards on 23 carries with a touchdown.

LSU’s 714 yards of total offense is its second-most in program history and most against an SEC opponent. The most by LSU was 746 against Rice in 1977.

The teams combined for 1,328 yards, third most in an SEC game in history.

Ole Miss’s John Ryes Plumlee had a school quarterback rushing record with 212 yards, scoring four touchdowns on the ground. He finished 9-of-16 passing for 123 yards with an interception.

Rebels running back Jerrion Ealy added 141 rushing yards on 13 carries. Ole Miss’ top receiver was Elijah Moore who had nine catches for 143 yards with a touchdown.

Ole Miss won the coin toss and deferred its decision until the second half. LSU took the opening kickoff, defending the north end zone.

After crossing midfield with a pair of first downs, Burrow fired passes of 13 and 34 yards to Chase to put the first points on the board for LSU. Burrow scrambled right, split two rushers and hit Chase in stride at the 3-yard line to complete a seven-play, 75-yard opening scoring drive. LSU led 7-0 with 12:56 to play in the first quarter.

LSU returned the favor on the ensuing drive, as Burrow came up short on third-and-3, and Cade York missed a 48-yard field goal just outside the right upright.

Following an Ole Miss punt from midfield, Burrow completed all six of his passes for 72 yards, breaking the LSU single-season passing yards record on an 18-yard pass to Chase to the Ole Miss 4. Burrow broke Rohan Davey’s mark of 3,347 set in 2001.

On the next play, Davis-Price ran over left guard for the touchdown that put the Tigers ahead 14-0 with 1:22 left in the quarter.

Ole Miss punted on the first play of the quarter after a three-and-out drive that ended the first quarter. Burrow needed only two passses to Chase to extend the Tigers advantage to 21-0. From the LSU 49, Burrow again rolled to his right to avoid pressure and lofted a 51-yard touchdown pass to Chase.

The Rebels punted again from inside LSU territory, giving Burrow and the Tigers an opportunity for a 28-0 lead. A 32-yard pass to tight end Racey McMath along with a personal foul on the Ole Miss bench put the Tigers at the Ole Miss 26. Three plays later, Burrow found Jefferson on a screen pass to his left, and the speedy receiver took it the rest of the way for a 12-yard touchdown.

A 46-yard run by Ole Miss’ Ealy to the LSU 26 put the Rebels in position for its first score. On second-and-goal from the 5, Plumlee took a quarterback keeper to the end zone to cut LSU’s advantage to 28-7 with 5:40 left in the quarter.

The Tigers used almost the entire duration of the half on a 13-play, 63-yard drive, but Burrow was sacked on third-and-goal from the Ole Miss 6 and LSU left with a 33-yard field goal by York.

Ole Miss used a 29-yard pass to tight end Octavious Cooley and a 46-yard read-option by Plumlee to get eight points closer to the Tigers only 31 seconds in the second half. Following Plumlee’s run, the Rebels QB completed a two-point conversion pass to cut the margin to 31-15 with 14:29 left in the third quarter.

LSU answered with a 17-play, 66-yard drive that took 6:10 off the clock. However, the Tigers were again forced to accept a short field goal by York, whose 27-yard boot was true. LSU pushed its advantage to 34-15.

For the second time in as many second-half drives, Ole Miss scored in two plays. A 15-yard run by Ealy setup a 60-yard keeper by Plumlee that cut LSU’s lead to 34-23 following another successful two-point run by Plumlee.

LSU used only 56 seconds to answer the score, as Edwards-Helaire topped 100 rushing yards on the evening with a 20-yard run to begin the Tigers march. Burrow then connected with Jefferson for 48 and 7 yards for a touchdown, giving LSU a 41-23 lead with 6:50 left in quarter.

An interception of Plumlee by LSU safety Kary Vincent Jr. was returned 40 yards to the Ole Miss 24. But a sack of Burrow forced LSU to attempt a 52-yard field goal, and York was successful. LSU led 44-23.

The teams traded turnovers to start the quarter, as Ole Miss gave it to LSU when a fourth-and-5 run by Plumlee was stuffed by Patrick Queen and Ray Thornton. Then, LSU gave it back when Burrow threw an interception to Keidron Smith along the right sideline at the LSU 35.

On the Rebels’ first play, Plumlee scored fourth rushing touchdown of the game from 35 yards. Ole Miss kicked the PAT and trailed 44-30 with 13:26 remaining in the game.

Following a Burrow interception at the Ole Miss 16, Ole Miss entered LSU territory on an offside penalty against LSU linebacker K’Lavon Chaisson. On the 14th play of the Rebels drive, Plumlee’s fourth-and-17 pass fell incomplete to give LSU possession with 5:35 to play.