Ferguson One of Nine Semifinalists for Wuerffel Trophy 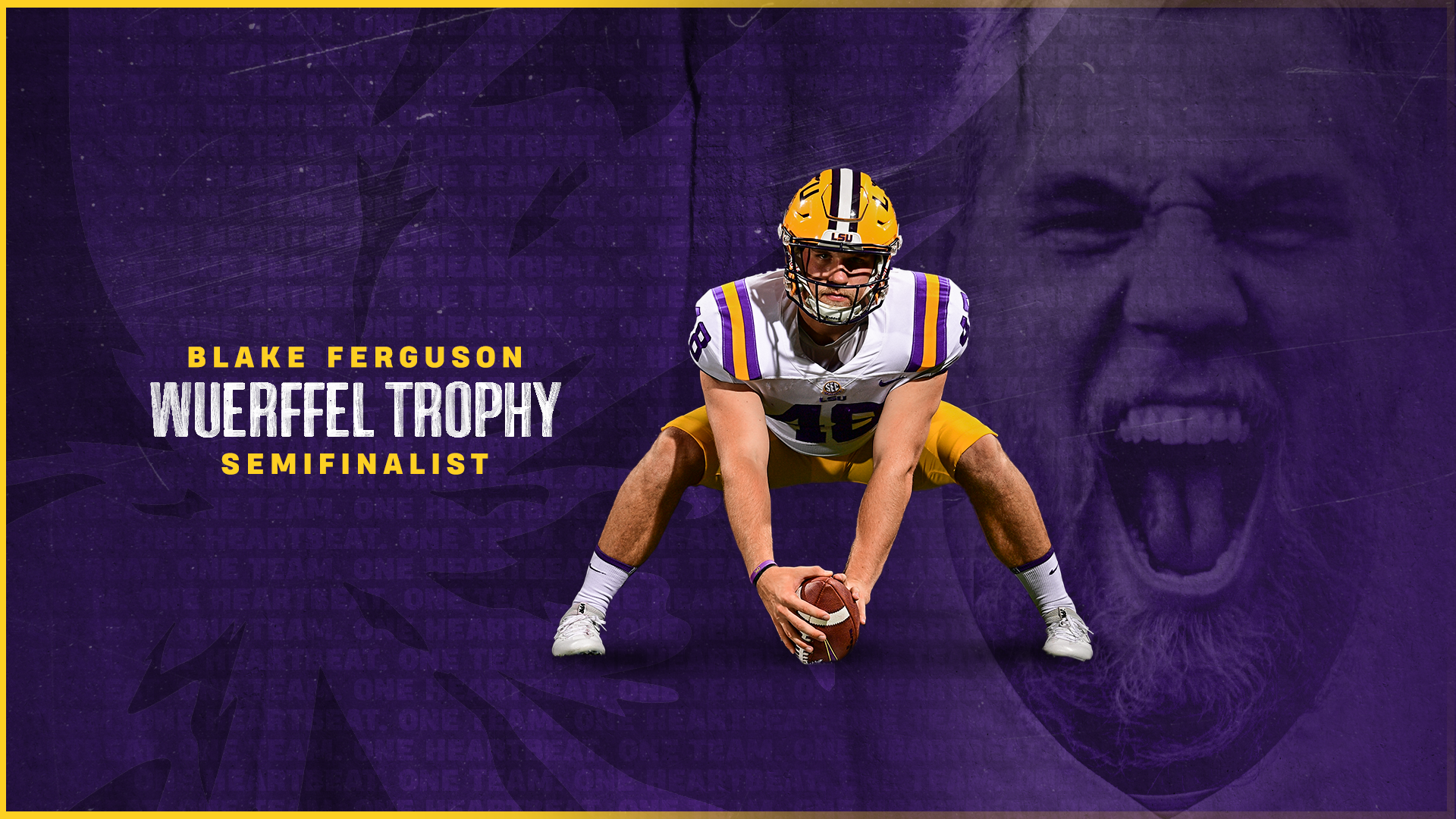 BATON ROUGE – LSU long snapper Blake Ferguson has been selected as one of nine semifinalists for the Wuerffel Trophy, which is “college football’s premier award for community service”, the Chick-fil-A Foundation announced on Tuesday.

The Wuerffel Trophy is presented annually to the Football Bowl Subdivision player who best combines exemplary community service with athletic and academic achievement. Named after 1996 Heisman trophy winning quarterback, Danny Wuerffel, from the University of Florida, the Wuerffel Trophy has honored over 1,200 nominees since its inception in 2005.

Former Tiger center Rudy Niswanger was the inaugural winner of the Wuerffel Trophy in 2005.

“Once again this year demonstrates how many first-class young men are out there doing tremendous work in their communities,” said Danny Wuerffel.  “It was an extremely difficult job that we had narrowing the list down to only nine semifinalists.  These men represent the best of the best.”

Ferguson, a senior from Smyrna, Ga., has excelled on the football field, in the classroom and in the community during his LSU career. Ferguson, who is the younger brother of former LSU long snapper and current Buffalo Bill Reid Ferguson, is a four-year starter for the Tigers.

Last year, Ferguson became the first long snapper in LSU history to be named a permanent team captain. He was also named first team All-America at his position by Phil Steele Magazine, the only organization to recognize a long snapper as part of its All-America team.

In the classroom, Ferguson has been named to the Southeastern Conference Academic Honor Roll four times, is in his second term of serving as the chair of the SEC’s Football Leadership Council and has twice been nominated for the AFCA Good Works Teams for his work in the community.

Ferguson graduated with an undergraduate degree in marketing with a 3.5 grade point average in three years. He’s currently on pace to earn a Master’s in Business Administration from LSU in December.

In the community, Ferguson, who is a Type I diabetic, has been an advocate for the American Diabetes Association and its research initiatives. He took part in the “Call to Congress” in the spring of 2018 where he joined numerous NFL players as they helped raise awareness and funds for diabetes research in the United States. While in Washington D.C, he met with members of Congress as well as others involved in policy making.

Other community endeavors for Ferguson include being a frequent visitor to schools in the Baton Rouge area where he motivates kids to stay active and talks about the importance of a healthy diet. He has also taken part in events such as the Tim Tebow Night to Shine, Athletes for Hope, and Dr. Seuss Day. Ferguson is also actively involved in the Fellowship of Christian Athletes at LSU.

Voting for the Wuerffel Trophy is performed by a national selection committee that includes college football television and print media, industry notables, former head coaches and prior Wuerffel Trophy recipients.

The 2019 Wuerffel Trophy winner will be invited to attend The Home Depot College Football Awards Red Carpet Show on ESPNU and ESPN3 on Dec. 12, 2019, featuring interviews with award winners and finalists as they approach The Home Depot College Football Awards Show. The presentation of the 2019 Wuerffel Trophy will occur at the 51st Annual All Sports Association Awards Banquet on Feb. 7, 2020 in Fort Walton Beach.