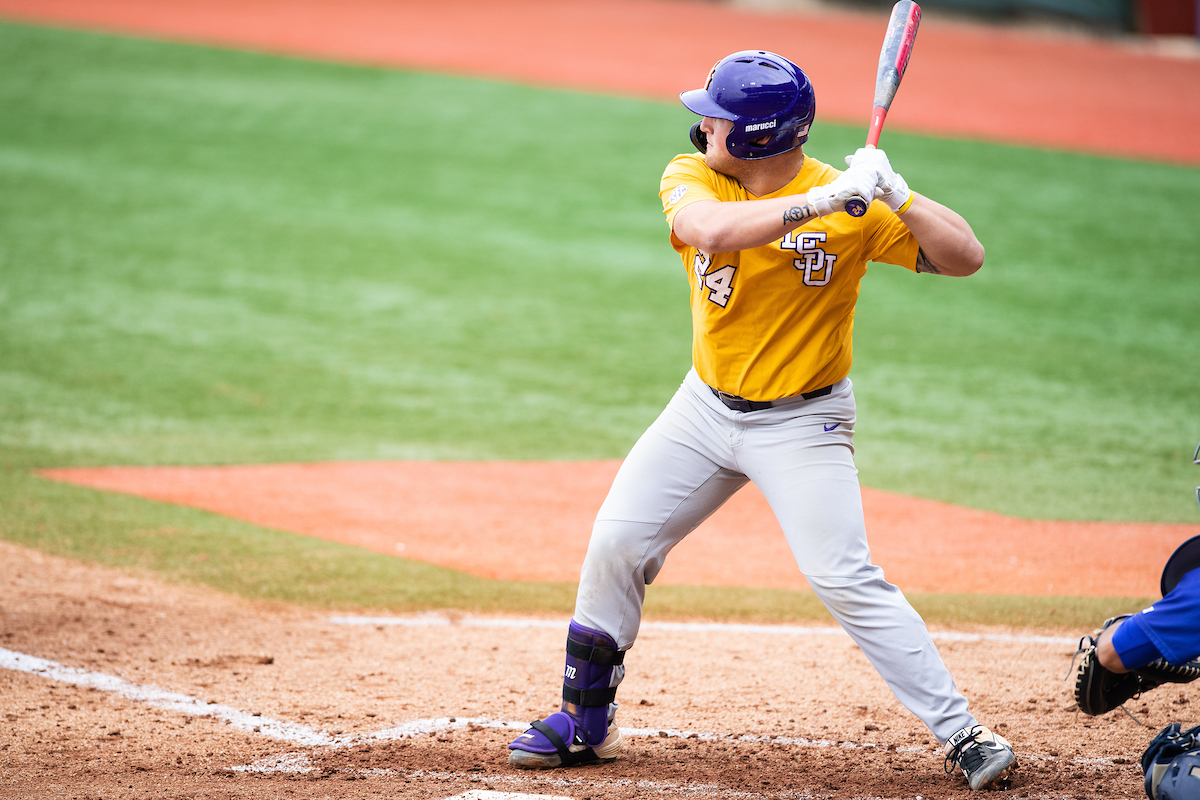 “It’s great to play somebody with a different colored uniform at this time of the year,” said LSU coach Paul Mainieri. “I think our players get a little tired of scrimmaging against each other every day, so when you go out and compete against somebody else, it brings out the best in you. I thought it was a benefit to our team to compete in a different environment, and we played very well in so many areas.

We had several extra-base hits, and several two-out RBI hits; when you do that, you’re going to score some runs.”

Rightfielder Daniel Cabrera launched a two-run home run to right center in the top of the first to give LSU the 2-0 lead. First baseman Cade Beloso had reached on a two-out walk prior to Cabrera coming to the plate.

Third baseman Zack Mathis singled down the right field line to score Hughes and Toups moved to third. Beloso then dropped a base hit into shallow left to score Toups and give LSU a 5-0 lead.

Nicholls’ Waylon LeBlanc came in as a pinch runner in the third and scored from third on a passed ball with two outs,  trimming the lead to 5-1.

Mathis hit a leadoff double in the fifth and then moved to third on wild pitch. Beloso followed with a RBI double to left center that scored Mathis. Leftfielder Mitchell Sanford then hit a two-out single that allowed Beloso to score, extending the LSU lead to 7-1.

The Colonels added two runs in the bottom of the eighth as second baseman Alex Galy drew a bases-loaded walk with one out. LSU pitcher Jacob Hasty then reached the 25-pitch mark, which awarded Nicholls another run because of the special rules used for the exhibition game. The runs reduced the LSU lead to 7-3.

LSU plated three more runs in the 10th to extend its advantage to 10-3. Beloso drew a walk and Cabrera dropped a one-out single into center to start the inning. Catcher Alex Milazzo followed with a liner through the right side, scoring Cabrera, and Beloso came home on an error by the right fielder. One additional run was awarded as Nicholls pitcher Bryan Taylor reached the 25-pitch limit.

Designated hitter Gavin Dugas lined a one-out base hit through the right side and then stole second and third in the 11th. Collier Cranford then hit a RBI single that scored Dugas and extended the LSU lead to 11-3.

Beloso dropped a two-out single into left center in the 12th to plate two more Tiger runs, as Drew Bianco and Braden Doughty scored on the hit. Cabrera then lined one through the right side to bring another run across. Following Cabrera’s at-bat, LSU was awarded another run for the 25-pitch limit, extending the lead to 15-3.

The Tigers have one week of fall practice remaining, which includes the annual Purple-Gold World Series at “The Box” on Wednesday, November 6, and Friday, November 8.

LSU will start the regular season Friday, February 14, at home against Indiana.