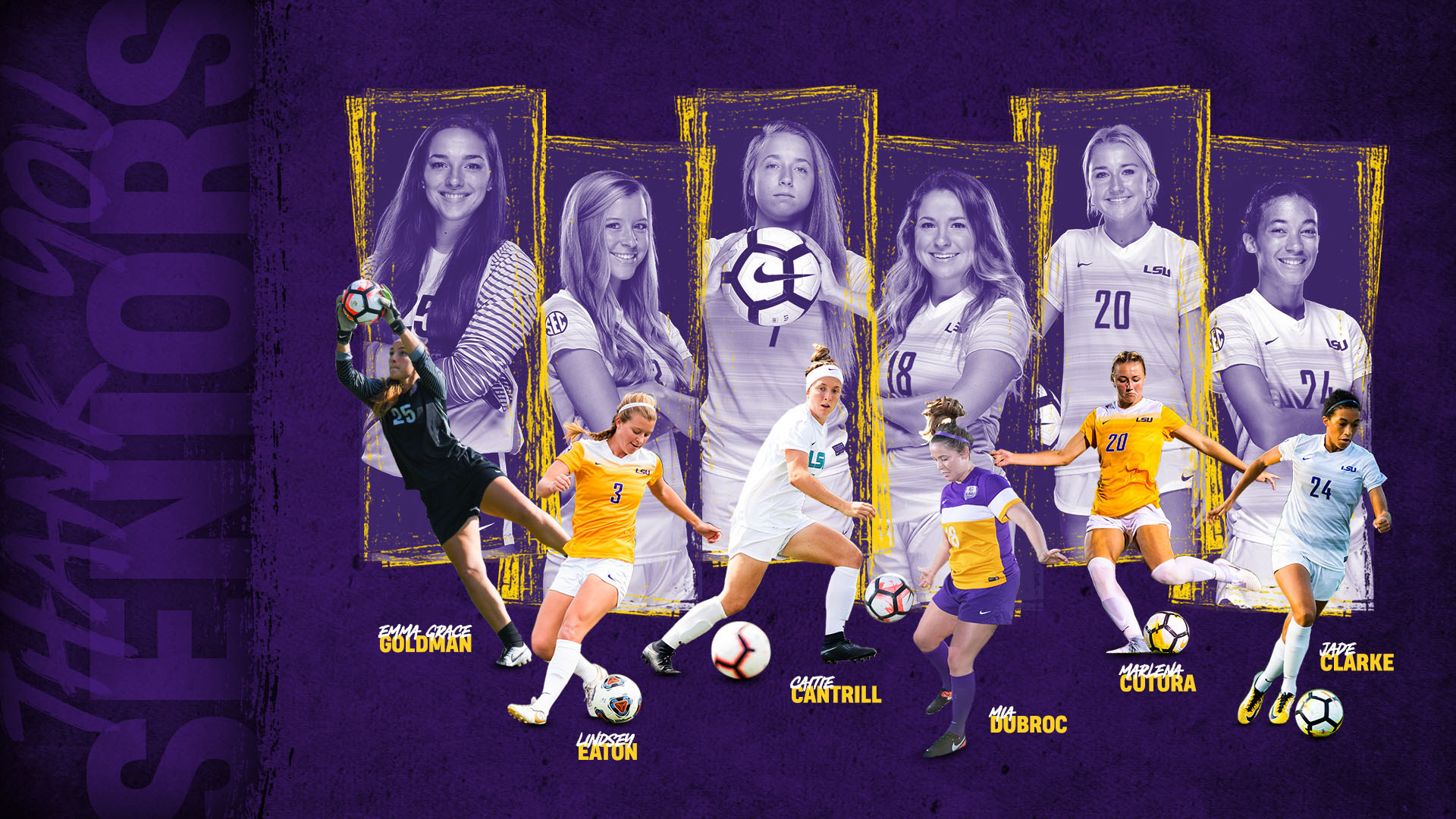 Baton Rouge, La. – The LSU soccer team will close out its 2019 season on Thursday night with a home contest against Kentucky. First kick will be at 6:45 p.m. at LSU Soccer Stadium and admission will be free.

Thursday night’s match will be streamed on SECN+ at the live video link above. The SEC Network will be providing live wraparound coverage of all seven conference games beginning at 6 p.m. CT. The LSU vs. Kentucky match will be aired on SEC Network for an undetermined amount of time.

LSU will honor the careers of six seniors on Thursday night. The list of seniors being recognized on Thursday is Lindsey Eaton, Caitie Cantrill, Mia Dubroc, Marlena Cutura, Jade Clarke, and Emma Grace Goldman. These six seniors have combined for 238 appearances including 124 starts. Cutura has started 66 of her 76 career games played.

LSU has won two out of the last three meetings against Kentucky. The series goes all the way back to 1995 and Kentucky holds the all-time advantage with a record of 13-6-1 between the two schools.

The Wildcats enter Thursday’s finale with a record of 6-9-3 (1-7-1 SEC). Hannah Richardson and Jordyn Rhodes are Kentucky’s two best attackers as they have combined for a total of 14 goals this season with eight from Richardson and six from Rhodes. Steph Stull will man the net and she owns a GAA of 1.48; she has made 61 saves this season and allowed 28 goals.

Meghan Johnson scored the second goal of her sophomore season on Oct. 24 with a nice left-footed shot from about 14 yards out against Mississippi State. Trailing early in the match 1-0 to Bulldogs, the Tigers needed a goal desperately. Johnson was the beneficiary of Molly Thompson going down in the box. No foul was called, but Thompson’s body shielded the Bulldog player from making a play on the ball and Johnson did the rest. Both of her goals this season have come off her left foot, and the two goals are now equal for a team high with Marlena Cutura’s two. It was Thompson’s first-career assist.

Freshman Rammie Noel was all over the place on Oct. 24 in LSU’s 2-2 draw against Mississippi State. She scored her first career goal in the 38th minute of the match to level it up at two apiece. Lindsey Eaton (first assist of season) played a one touch cross over to Noel, who sensed the keeper out of position, and she chipped it in from 12 yards out for her first career goal. Noel helped set up the aforementioned goal by Johnson to enable LSU to get on the board Oct. 24. In addition to her first career goal, much like all season long, Noel was all over the place creating chances for the Tigers.

Marlena Cutura factored into the box score for the second straight match on Oct. 24 against Mississippi State. She registered her team leading fourth assist of the season on Noel’s goal in the 38th minute Thursday night. She slid a beautiful through ball into the right side of the pitch that Lindsey Eaton was able to take care of and setup Noel. Cutura’s eight points (2g & 4a) on the season are a team high, and LSU all-time is 11-1-4 when Cutura registers an assist or scores a goal in a game.

LSU undoubtedly played one of the toughest schedules in the nation this season. LSU’s opponents have a record of 165-89-43 for a winning clip of .628. Only 10 other squads in America faced tougher schedules than that.

Goldman has been up to task this season in net for the Tigers consistently being challenged. Her 102 saves on the season lead the SEC and she is saving an SEC high 6.32 shots per match. She had one of the all-time great LSU performances in net against Georgia on Sept. 26 as LSU earned a 1-1 draw thanks in large part to her performance. She made 16 saves in that match, the second most in LSU single game history alongside Shelli Montevirgen’s 16 save match against Georgia in 1996. The 16 saves were one short of the LSU school record set by Bonnie Otillio in 1999 against Oklahoma. Goldman has started 15 matches for the Tigers and has a save percentage of .754; her 16 saves against Georgia are the most by any keeper in the league this season. Goldman’s 102 saves this season are the fifth most in an LSU single season.

The Tigers have played as many as seven first-time players on the pitch at once this season. A total of 9 players have made their LSU debuts this season. Maddie Moreau is the lone first-year player to start all 17 matches. Rammie Noel (14 starts), Emma Grace Goldman (16 starts), Meghan Johnson (14 starts), Anna Rockett (7 starts), Maya Gordon (8 starts), Sydney Lau (1 start), Courtney Henderson (4 starts) and Maddison Martin (1 start) have all earned the first starts of their career this season as well. Hannah Cuneo (9 matches), Makenzie Maher (11 matches), Mia Dubroc, and Afrah Khan have all earned their first playing time for the Purple and Gold this season. Jade Clarke made her first start of the 2019 season and the 17th start of her career on Oct. 3 against Auburn. Dubroc and Khan made their LSU debuts on Sunday night against Ole Miss.