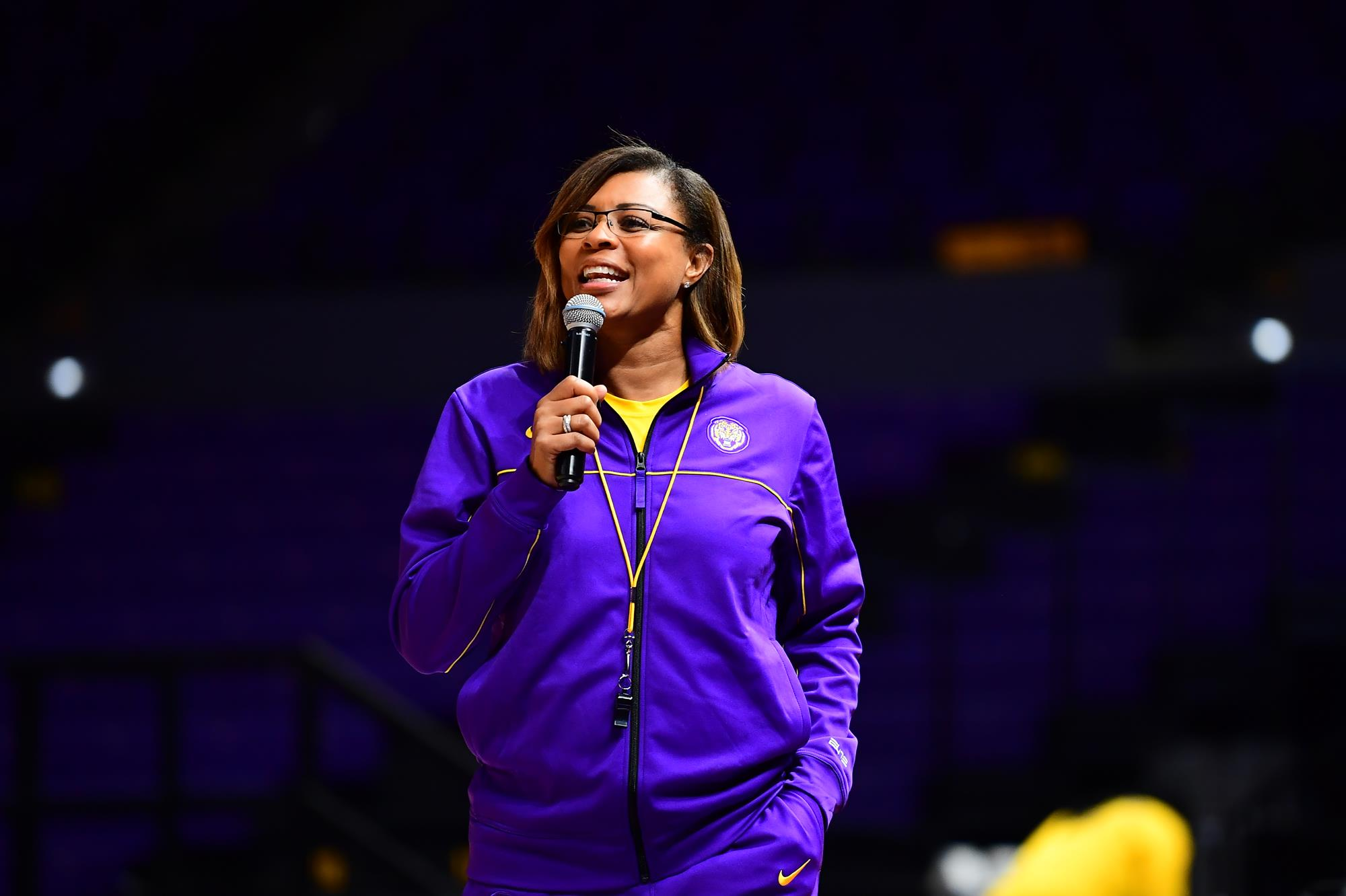 BATON ROUGE – Coach Nikki Fargas and Coach Will Wade led their respective LSU basketball teams through workouts early Saturday afternoon before a nice crowd at the Pete Maravich Assembly Center prior to the LSU-Auburn football game across the street in Tiger Stadium.

Highlighting the two-hour event was the presentation of the championship rings to the Tiger players and staff from the 2018-19 winners of the regular season Southeastern Conference title. LSU was 28-7 overall and advanced to the NCAA Sweet 16 and was 16-2 in the league.

Coach Fargas’ Tigers, led by first-team preseason All-SEC selection Ayana Mitchell, ran a couple of shooting and transition drills before moving into a scrimmage phase of their practice. The Coach was pleased to be able to showcase her team at the open to the public TAF Tailgate event.

“It’s always great to have fans come in to watch practice,” Coach Fargas said. “It is a different level of energy when the PMAC is filled. The young ladies have been working extremely hard and when you are able to do a basketball showcase with the men’s and women’s teams so you can lay out what we are going to be doing this season, I hope the fans will take this opportunity to say let’s come back and support the men’s and women’s basketball teams.

“I saw some good things. There are still some things we have to work on,” the ninth-year Coach of the women’s program said. “We’ve got four newcomers that are learning our offensive and defensive scheme, but the veterans are doing what they need to do in leading them. I’m liking what I see out of our freshmen.”

Coach Wade and staff put the Tigers through several drills during the practice that followed for the men, including defensive drills, rebound and transition and shooting drills both 4-of-4 and 5-on-5 through the course of their session.

The women’s basketball team will play an exhibition game on Friday (Nov. 1) against Mississippi College (6:30 p.m.) before opening their season at the Maravich Center against UNO on Nov. 5 (6:30 p.m.). The men will open their 2019-20 on Friday, Nov. 8 (7 p.m.) against Bowling Green. Season tickets for both the men’s and women’s basketball teams are available at LSUtix.net.