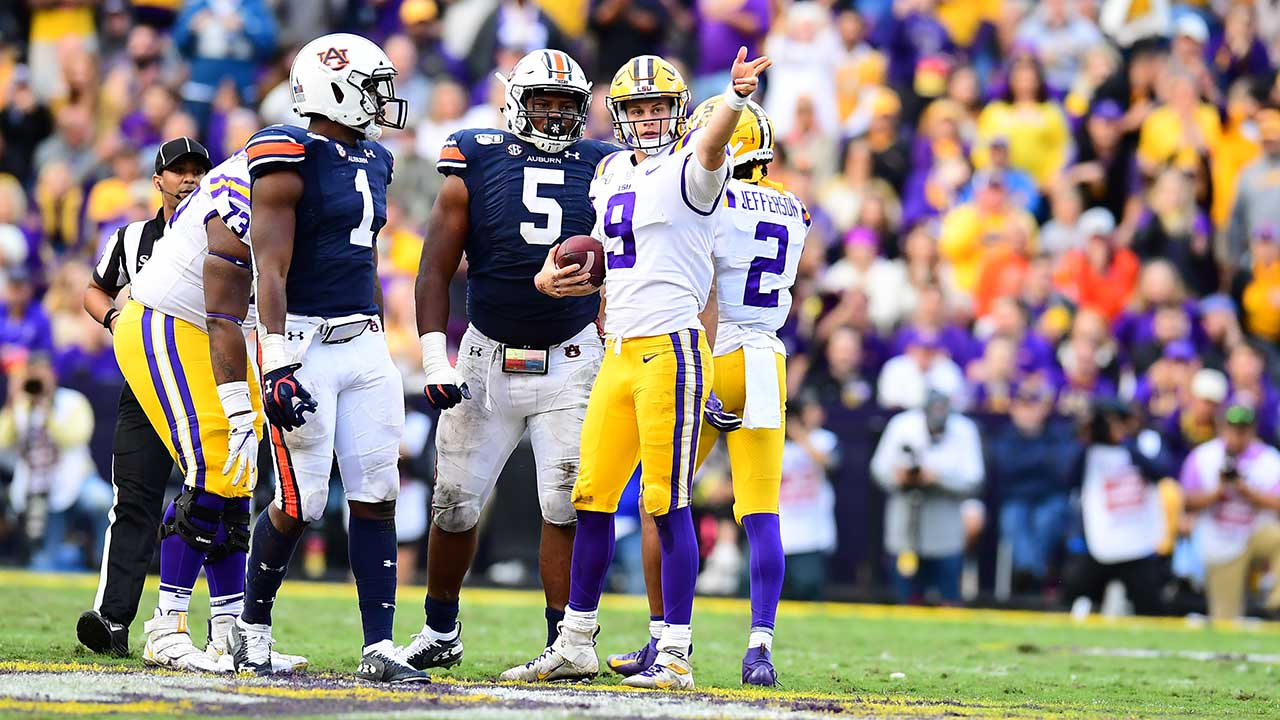 BATON ROUGE — No. 2 LSU had more than 500 yards of total offense and overcame a pair of turnovers to defeat No. 9 Auburn, 23-20, on Saturday afternoon in Tiger Stadium.

LSU (8-0, 4-0 SEC) was again led by quarterback Joe Burrow, who posted career highs in passes (32) and attempts (42) for 321 yards with a touchdown passing and another rushing that put the homestanding Tigers ahead by 10 points early in the fourth quarter. Burrow’s sixth 300-yard passing game tied Rohan Davey for LSU’s single-season record.

Running back Clyde Edwards-Helaire had a game-high 136 rushing yards on 26 carries including a 6-yard touchdown in the third quarter that put LSU up 16-13.

LSU earned its third AP Top-10 victory in the 2019 season and head coach Ed Orgeron‘s eighth in his 42nd game as the Tigers’ head coach.

The Tigers have an open date before traveling to face No. 1 Alabama in Tuscaloosa on Nov. 9. The game will be televised by CBS with a 2:39 p.m. CT kickoff.

Safety JaCoby Stevens led LSU with 10 tackles, while linebackers Jacob Phillips and Patrick Queen added seven each. Phillips along with linebackers Michael Divinity Jr. and Damone Clark each had sacks.

Running back DJ Williams led Auburn (6-2, 3-2 SEC) with 130 rushing yards including runs of 41 and 70 yards. Auburn was only able to convert the big runs into three points, as LSU forced a field goal inside its 10 and LSU freshman cornerback Derek Stingley Jr. came up with his fourth interception of the season.

Though skies were overcast then clearing as the game progressed, the field at Tiger Stadium was slick following all-day rains on Friday from Tropical Storm Olga.

Inside LSU Football with Ed Orgeron

On its second possession of the first quarter, Auburn moved 42 yards on 14 plays, with the drive culminating on an Anders Carlson 30-yard field goal at the 8:39 mark.

LSU responded early in the second period by driving 89 yards on 10 plays, taking the lead on a 20-yard touchdown pass from quarterback Joe Burrow to wide receiver Terrace Marshall Jr. The scoring strike was preceded by 27-yard and 19-yard completions from Burrow to Chase.

Auburn took over on the LSU 22-yard line at the 6:24 mark of the first half when Stingley fumbled a punt, and the ball was recovered by Jamien Sherwood.

Auburn capitalized on the turnover, scoring on fourth-and-goal at the one-yard line on a quarterback sneak by Bo Nix to take a 10-7 advantage with 3:06 remaining before halftime.

LSU tied the contest quickly, driving 73 yards on 10 plays as York connected on a 20-yard field goal with 33 seconds left in the half.

Auburn regained the lead on its opening possession of the second half when Carlson hit a 23-yard field goal at the 11:42 mark of the third quarter. The 73-yard, five-play drive opened with a 70-yard dash by running back DJ Williams to the LSU nine-yard line.

After cornerback Roger McCreary intercepted Burrow at the Auburn two-yard line, the LSU defense forced a three-and out, and the Bayou Bengals offense took over at the AU 45.

From there, LSU cruised down the field in four plays, as Edwards-Helaire reached paydirt on a 6-yard burst. York missed the PAT, and LSU led 16-13 with 4:58 remaining in the third period.

The LSU defense created another three-and-out on Auburn’s next possession, setting up the offense at its own 33-yard line. The Tigers surged 67 yards in 11 plays, as Burrow completed the march with a 7-yard touchdown run on third-and-five.

A 20-yard loss on a bad snap and a 14-yard sack of Nix by LSU linebacker Damone Clark brought quick endings to Auburn’s next two drives, as the teams punted on four-straight three-and-out-drives in the fourth quarter.

With a 34-yard heave to Seth Williams, Auburn crossed midfield with 5:10 to play. However, a 27-yard screen two plays later was brought back by an illegal blindside block and Auburn punted to the LSU 4 on fourth-and-24 from its 42.

LSU punted to its 49 after three runs from inside its 10, as Auburn used its final two timeouts with less than four minutes to play.

The visiting Tigers needed four plays – and a pass interference call – to score on a 5-yard pass from Nix to Williams.

Auburn cut the deficit to 23-20 but was unable to recover a loose onside kick attempt, allowing LSU to run out the clock.