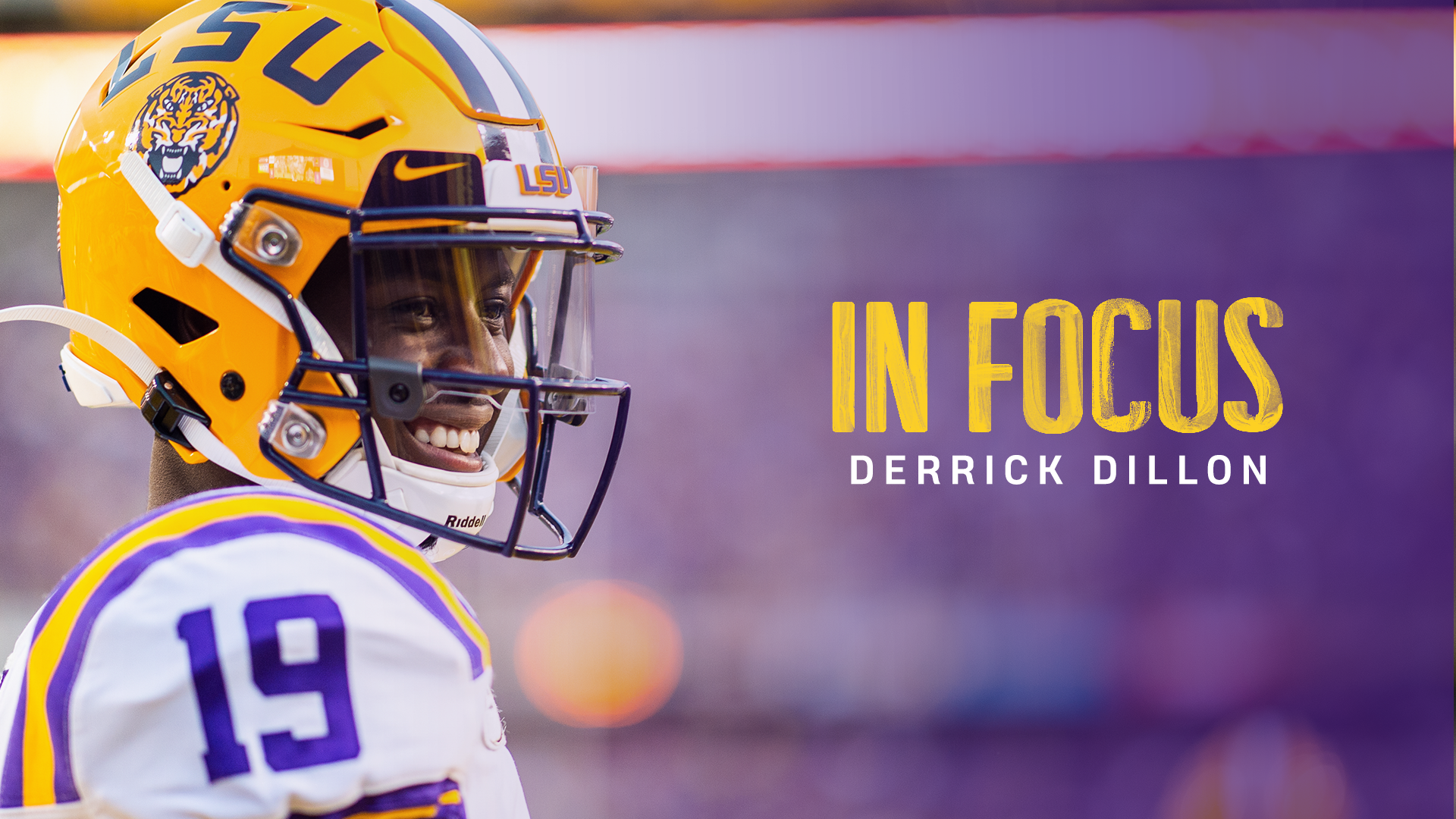 Derrick Dillon doesn’t attract much attention off the field, but he’s got a knack for the big play when he’s on it.

With LSU trailing late in the fourth quarter vs. Auburn in 2018, quarterback Joe Burrow found Dillon over the middle for a stadium-silencing 71-yard touchdown pass to lead the Tigers to a dramatic comeback victory at Jordan-Hare Stadium.

That in itself is a career-defining catch.

Fast-forward to January, down 14-10 in the second quarter to UCF in the Fiesta Bowl, Burrow connected with Dillon, who took it to the house for a 41-yard score. The Tigers never fell behind again, and returned home with their first New Year’s Six bowl win in the College Football Playoff era.

With all these memorable catches, does Dillon ever sit back and think about it?

For a while, Dillon was a player that was waiting for his breakout moment. Redshirting his freshman season and playing mostly on special teams during his sophomore year, he certainly got that moment as a junior against Auburn, but one thing was missing for him to fully appreciate his big play.

Earl Cotton , Derrick’s father, died that March after complications from a bacterial infection that he had been dealing with for years. After the Auburn game, Dillon was understandably emotional, but knew his dad was running alongside him that day at Jordan-Hare.

Even with everything Dillon has been through, one thing was clear during Monday’s media availability before the Mississippi State game: he’s a happy kid. Dillon smiled from ear-to-ear the entire time, laughed, enjoyed answering questions, radiating positive vibes.

He may not show a ton of emotion, but Dillon definitely has a competitive fire within him when he’s on the field. With Todd Harris out with injury, Dillon has also taken over at the ‘gunner’ spot on kickoff coverages, where he, Racey McMath and other wideouts hold some friendly competitions while running down the field.

“We always tell each other, ‘I bet I beat you down there this time’ on kickoffs,” said Dillon. [Racey] beat me once and I think I beat him last game.”

“I’ve been getting some tips from [former Tiger receiver] Russell Gage [on playing gunner]. I’m just trying to use what he tells me and make the best of it.”

LSU’s “Everybody Eats” system on offense has taken college football by storm this year. Spreading the ball out means Dillon’s role has only expanded in 2019. On Oct. 5 against Utah State, Dillon totaled 4 receptions for 42 yards and a touchdown.

“Every play you can get the ball thrown to you,” said Dillon. “Last year, I was running off to get another person open.”

Even with getting some more touches in this new spread attack, it’s clear that Dillon is a level-headed, team-oriented player. Dillon focuses on doing his job and promises that he will do whatever the coaches need of him. His big moments will come when they do.

“I just play my role, run the plays the coaches call and do my part,” he said.

The feet plus the balance plus the accuracy.

As humble as he is, Dillon is undoubtedly a key player in an offense full of weapons. New passing game coordinator Joe Brady has made an immediate impact by getting the ball in the hands of playmakers, and Dillon is certainly one of them. During Brady’s short tenure in Baton Rouge, Dillon is excited about what he’s learned from the former New Orleans Saints assistant.

“He has a lot of knowledge about how the NFL works and about what guys need to work on to play at the next level,” he said.

It goes without saying that the Franklinton, Louisiana native has made some game-changing catches for the Tigers throughout his career. With a couple of monster plays under his belt, the nerves start to subside, and it’s just about lining up and beating the man in front of you.

“It’s made me more comfortable and relaxed. I just go out there and do it.”

For LSU’s senior wideout, he continues to take it game-by-game. But at any moment, Dillon could rip off another season-altering touchdown, so don’t blink.