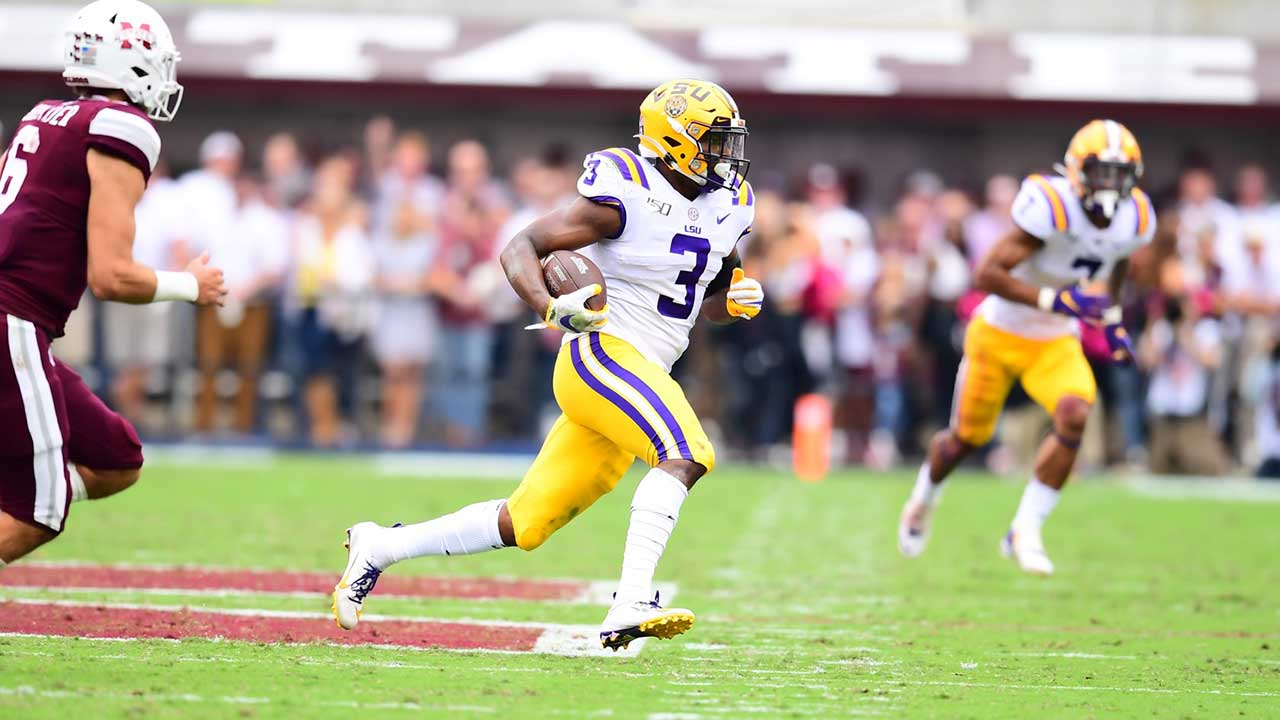 It’s a feeling JaCoby Stevens couldn’t stifle after Saturday’s 36-13 win over Mississippi State, when he and fellow safety Grant Delpit finally showcased not just how good they are individually, but also how dynamic they can be in unison.

On a day where quarterback Joe Burrow set the single-season record for touchdown passes at LSU – just seven games into the season – LSU’s defense stole the headlines, led by its dynamic duo at safety.

Delpit spent the day racing downhill with his ears pinned back, racking up a team-high 11 tackles, while Stevens popped up everywhere, with a sack, an interception, and a tackle for loss to go along with eight tackles.

The duo spearheaded a dominant day for the defense, as LSU held Mississippi State to 258 yards and seven points before the reserves surrendered a late score.

“In my head, we were always the best safety duo in the country,” said Stevens. “Today, we finally put a good game together.”

They set the tone from the start. On Mississippi State’s opening drive, Delpit stuffed a third down run to force fourth down at midfield. Stevens followed suit, ignoring a fake sweep and throwing State quarterback Garrett Shrader to the ground short of the sticks.

LSU’s safeties got downhill on third and fourth and 1 to stop the Bulldogs at the 50. Delpit on third down, Stevens on fourth.

“Whenever we can put our offense in good places, that’s what we try to do,” said Delpit.

Delpit was back to his best, showcasing all the skills that made him a Unanimous All-American in 2018. He played closer to the line of scrimmage more often. After rushing the passer just seven times in six games prior to Saturday, he was lined up in the nickel and blitzing Garrett Shrader on multiple occasions.

“Grant’s just a hungry player,” says senior defensive lineman Breiden Fehoko, who registered one of LSU’s five tackles for loss. “When he’s in the box, when he’s blitzing, he blitzes with attitude. He’s relentless. There’s times today where even though he didn’t make the tackle, you could see him just trying to inch for negative plays. That’s the kind of stuff you want to see.”

Head coach Ed Orgeron said Delpit has gotten back to the basics the last few games, focusing on tackling and not worrying about an early season shoulder injury.

Delpit, meanwhile, credited defensive coordinator Dave Aranda for opening up his arsenal to the LSU defense. Last year, it was Aranda’s creation of the quarter position that spurred Delpit into All-American success. Saturday, likewise, it was Delpit’s move back toward the line of scrimmage at Aranda’s insistence that spurred an All-American performance.

“Coach Aranda’s opened it up a little bit,” Delpit said. “I love when he opens it up. That’s when the genius comes out.”

Stevens, meanwhile, showcased his own brilliance with a momentum-shifting interception in the second quarter. With LSU ahead 15-7 – the Tiger offense settled for field goals on three red zone trips – Stevens dropped into a zone and leapt for a one-handed pick of Shrader with 1:53 left in the half.

“I could’ve jumped a little bit higher,” he said.

It was high enough. The pick set the stage for a five-play, 55-yard touchdown drive, with Burrow finding Ja’Marr Chase in the middle of the end zone for a 22-7 lead. It sucked the energy out of a feisty home crowd and poured gasoline on the Tigers’ fire, fueling 27 unanswered points from LSU.

“That turnover gave us a little confidence going into the half,” Orgeron said. “I knew we were going to come out in the third quarter and light it up.”

The defense’s boost gave the offense the time it needed to course-correct. Burrow threw third quarter touchdowns to Derrick Dillon and Justin Jefferson to put the game to bed by the fourth quarter.

Still, the early struggles to punch scores in stuck with the Tigers after the game. Three times in the first half, LSU faced ‘and goal’ situations from inside the Mississippi State 10 yard line. Three times, they settled for field goals.

“It was frustration for everybody, but we didn’t panic,” Orgeron said. “The difference was, it was about time the defense stood up. The defense played well, and the offense knew they were going to get it going. Team game, and the defense came ready to play today.”

Stevens wasn’t the only turnover-forcer on the day. Rashard Lawrence scooped up a second-quarter fumble forced by Michael Divinity, and Kristian Fulton cemented the win with a fourth-quarter interception.

“The defense came to play today,” Orgeron said. “The turnovers really helped us. That gave us time for the offense to get hot, and they got hot in the third quarter.”

Defensively, it all started and ended with Delpit and Stevens, two former five-star recruits who came to LSU to compete with each other and play next to one another. For two seasons, they’ve battled for reps. On Saturday, they battled for first rights to the ball carrier.

“We’re just feeding off each other,” Stevens said. “He makes a play, I make a play, and we go back and forth.”