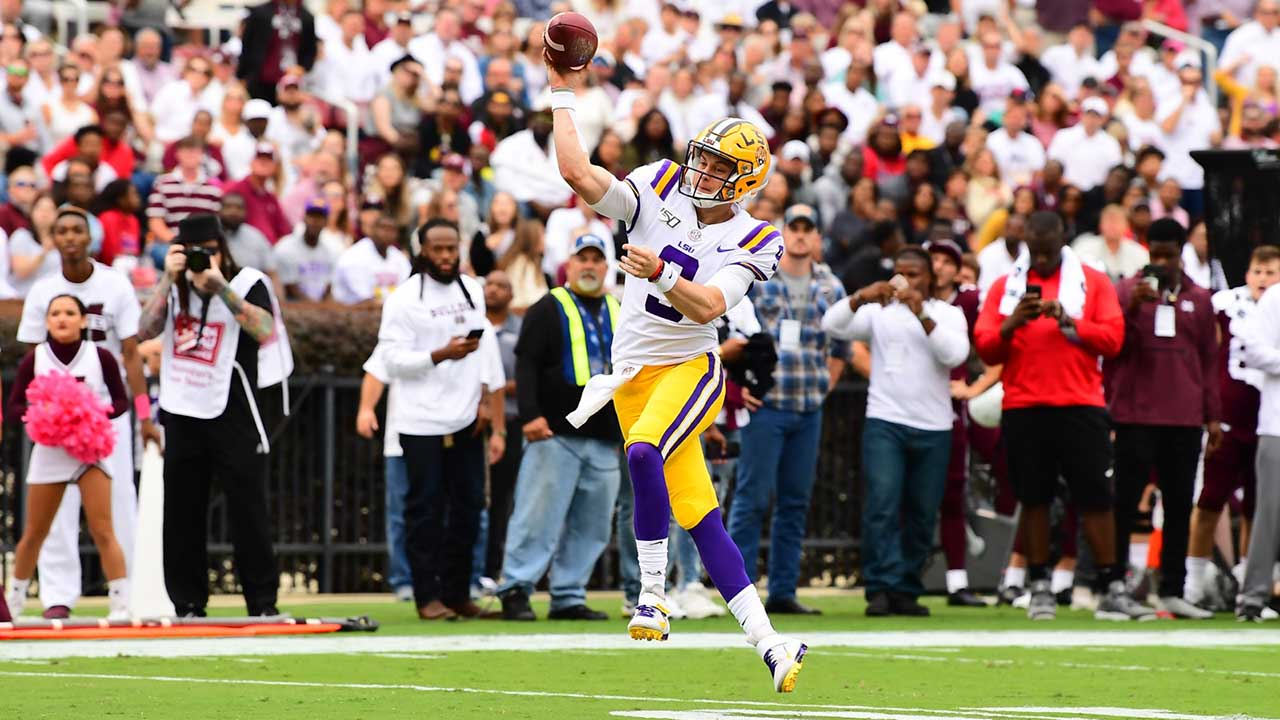 Burrow, a senior who is putting an onslaught on the LSU record book, was 25-of-32 for 327 yards with four touchdowns. Burrow, who tied Rohan Davey (1998-2001) with seven 300-yard passing games in his career, exited after one series in the fourth quarter, allowing Myles Brennan to finish the game.

With a 37-yard touchdown pass to wide receiver Derrick Dillon in the third quarter, Burrow set LSU’s single-season record with his 30th touchdown responsible for (28 passing, 2 rushing). JaMarcus Russell (2006) and Matt Mauck (2003) held the record with 29.

Later in the third quarter, an 18-yard touchdown pass to Justin Jefferson was Burrow’s 29th of the season, breaking LSU’s single-season record also held by Russell and Mauck.

Defensively, LSU forced three turnovers including interceptions by JaCoby Stevens and Kristian Fulton, and a fumble forced by Michael Divinity Jr. and recovered by Rashard Lawrence.

Mississippi State’s Garrett Shrader led the Bulldogs with 238 yards on 17-of-28 passing with a fourth-quarter touchdown and two interceptions. His favorite target was Stephen Guidry, who had six receptions for 98 yards including a 24-yard score with 59 seconds to play. Sharder also ran for 66 yards on 19 attempts with a touchdown in the second quarter.

A limited number of tickets remain at LSUtix.net. Fans are also encouraged to use the official StubHub marketplace to buy and sell tickets at LSUsports.net/marketplace.

LSU won the coin toss and deferred its decision until the second half. The Tigers kicked off and defended the south end zone in the opening quarter.

After allowing a first down, LSU safeties Grant Delpit and JaCoby Stevens came up with stops on third and fourth down runs by State to turn the ball over to the LSU offense at the State 45.

A 19-yard catch-and-run by Chase on third-and-7 moved the Tigers to the 23 where Edwards-Helaire picked up a pair of rushing first downs. However, the Tigers couldn’t punch it in with two passes to Chase and a rush by Edwards-Helaire, and LSU settled for a 20-yard Cade York field goal.

State used Shrader and Hill to rush for a pair of first downs and cross midfield, however, an offensive pass interference penalty on a busted gimmick play stymied the Bulldogs drive and forced a 34-yard punt that was downed at the LSU 11.

After a touch-pass to Jefferson for 11 and a run by Edwards-Helaire for 8 yards, the Tigers switched ends to start the second quarter. Edwards-Helaire then moved the chains with 17 yards on third-and-2. Consecutive passes of 24 and 22 yards to tight end Thaddeus Moss gave LSU first-and-goal at the 7, but once again they left with only a 23-yard field goal by York. Burrow’s passes to Chase and Derek Dillon were broken up by State safety C.J. Morgan.

A 24-yard gain on a swing pass from Shrader to Gibson had the Bulldogs near midfield, but Dave Aranda dialed up the perfect blitz to force the game’s first turnover. Michael Divinity Jr. hit the Gibson just as received the handoff, forcing a fumble that was recovered by Rashard Lawrence at the State 44.

The Tigers took advantage of two personal fouls by the Bulldogs to get another goal-to-go opportunity. For the third time, the Tigers left with a 25-yard York field goal, as Burrow was sacked on first down.

State responded with its first scoring drive of the afternoon, a 7-play, 75-yard drive that started with passes of 18 yards to Stephen Guirdy and 11 to Farrod Green. A dead-ball personal foul on LSU’s Stevens gave the Bulldogs a first down at the LSU 12, where Shrader eluded LSU linebacker K’Lavon Chaisson and ran for the touchdown.

Mississippi State trailed 9-7 with 5:24 remaining in the half.

It took Burrow and the Tigers only 10 seconds to answer the score, as the LSU quarterback found tight end Racey McMath behind the Bulldogs defense for a 60-yard touchdown. A 22-yard kickoff return by Edwards-Helaire and a face mask penalty allowed the Tigers to start the drive from the 40. York’s PAT was missed to the right.

A one-handed interception by Stevens on the ensuing drive allowed LSU to start near midfield once again at its 45. The Tigers needed only five plays to convert its first red zone trip into a touchdown.

Following an 11-yard run by Burrow to the State 44, Burrow connected with Jefferson for 16 yards and Chase for 6 to the State 22. A 14-yard run by Edwards-Helaire setup Burrow’s 8-yard touchdown pass to Chase.

Each team came up with a sack – Cam Dantzler and Chauncey Rivers for State, Divinity for LSU – leading to consecutive three-and-out drives to start the second half.

Starting from his 34, Burrow connected with Chase who dragged defenders for an 18-yard gain to the State 37. On the next play, LSU’s signal caller tied the program’s single-season record with his 28th touchdown pass – a perfectly thrown 37-yard pass over the top to Dillon in the back of the end zone. The score was the 30th touchdown Burrow was responsible for in 2019, setting a single-season LSU record.

LSU took a 29-7 lead with 10:36 remaining in the third quarter and extended a program-best scoring streak to 39-consecutive quarters.

Burrow broke LSU’s single-season record for touchdown passes on the next drive, capping an 80-yard drive with an 18-yard TD pass to Jefferson.

Though LSU’s Kristian Fulton earned his first interception of the season, the Tigers offense was unable to take advantage of the turnover and punted into State end zone.

With 59 seconds to play, Mississippi State scored the only points of the final quarter with a 24-yard pass from Shrader to Stephen Guidry against the Tigers’ second string defense.