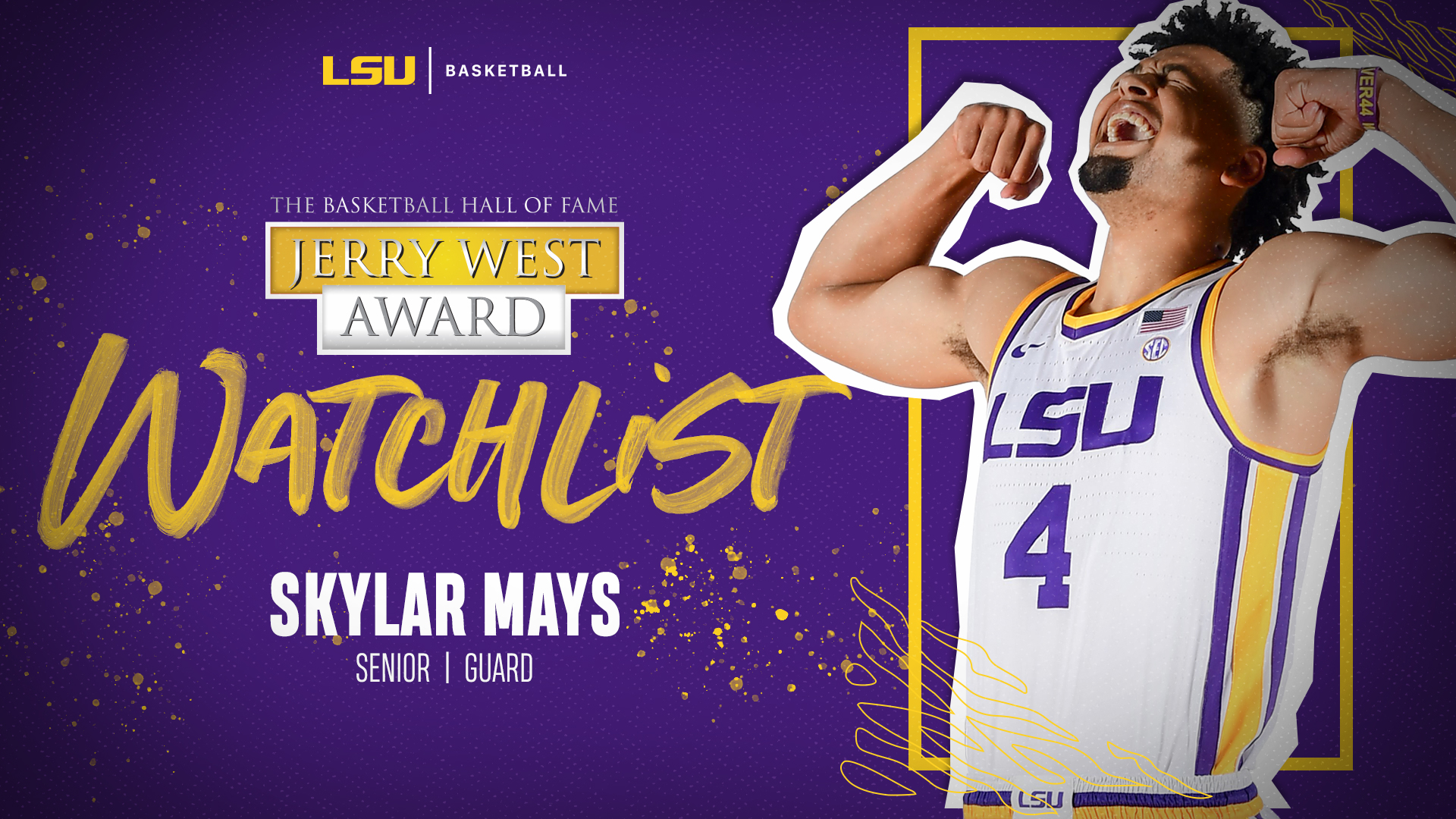 SPRINGFIELD, Massachusetts – LSU senior guard Skylar Mays has been named by The Naismith Memorial Basketball Hall of Fame Tuesday to the 20 player watch list for the 2020 Jerry West Shooting Guard of the Year Award.

Named after Class of 1980 Hall of Famer and 1959 NCAA Final Four Most Valuable Player Jerry West, the annual honor in its sixth year recognizes the top shooting guards in Division I men’s college basketball. A national committee of top college basketball personnel determined the watch list of 20 candidates.

“The Hall of Fame is proud to create connections between modern day athletes and fans with the iconic figures in our game, such as Jerry West,” said John L. Doleva, President and CEO of the Basketball Hall of Fame. “It is an honor to have his continued involvement in the Starting Five and we look forward integrating the fan voting component and we narrow the watch list this season.”

Jerry West attended West Virginia University and averaged 24.8 points and 13.3 rebounds per game in his three varsity seasons. He led his team to the NCAA Championship game in 1959 and was named a consensus All-American in 1959 and 1960. In the summer of 1960, he was co-captain of the U.S. men’s basketball team and won an Olympic gold medal. As a professional player, West played 14 seasons in the NBA with the Lakers making the All-NBA First Team 10 times. West won an NBA championship in 1972 and was named the NBA Finals MVP in 1969 despite his team not winning the championship. In 1996, he was named a member of the NBA’s 50th Anniversary All-Time Team.

Mays, who hails from Baton Rouge, was a CoSIDA Academic All-America the last two seasons (First Team in 2019, Second Team in 2018) and winner of the Jesse Owens Student GPA Award by the LSU Black Faculty/Staff Caucus. The second team All-SEC selection in 2019 and a preseason selection for second team All-SEC for this season, was the only player on the LSU team to play and start in all 35 games a season ago.

Mays averaged 13.7 points in SEC play and 14.0 points in the three NCAA Tournament games with 26 games in double figures and 61 games total over three seasons. His best games this past year were 24 at Missouri, 23 versus Tennessee and 20 versus Alabama, Auburn, Georgia and Oklahoma State. He stands at 1,100 points for his career and will play his 100th career game against Bowling Green in the season opener on Nov. 8.

Mays is one of seven SEC players named to the 20-man watch list.

New to the award this season is Fan Voting presented by Dell Technologies in each of the three rounds. By mid-February, the watch list of 20 players for the 2020 Jerry West Shooting Guard of the Year Award will be narrowed to just 10. In March, five finalists will be presented to Mr. West and the Hall of Fame’s selection committee. The winner of the 2020 Jerry West Award will be presented at The College Basketball Awards presented by Wendy’s in Los Angeles, CA on Friday, April 10, 2020, along with the other four members of the Men’s Starting Five.

Additional awards being presented and sponsored by Eaton Ephesus Lighting include the Bob Cousy Point Guard Award, the Julius Erving Small Forward Award, the Karl Malone Power Forward Award and the Kareem Abdul-Jabbar Center Award, in addition to the Women’s Starting Five. Broadcast information will be released by ESPN at a later date.

For more information on the 2020 Jerry West Award and the latest updates, log onto www.hoophallawards.com and follow @hoophall on Twitter and Instagram. Starting Five Fan Voting presented by Dell Technologies will go live on Friday, October 18.

About the Naismith Memorial Basketball Hall of Fame

Located in Springfield, Massachusetts, the city where basketball was born, the Naismith Memorial Basketball Hall of Fame is an independent non-profit 501(c)(3) organization dedicated to promoting, preserving and celebrating the game of basketball at every level – men and women, amateur and professional players, coaches and contributors, both domestically and internationally. The Hall of Fame museum is home to more than 400 inductees and over 40,000 square feet of basketball history. Nearly 200,000 people visit the Hall of Fame museum each year to learn about the game, experience the interactive exhibits and test their skills on the Jerry Colangelo “Court of Dreams.” Best known for its annual marquee Enshrinement Ceremony honoring the game’s elite, the Hall of Fame also operates over 70 high school and collegiate competitions annually throughout the country and abroad. For more information on the Basketball Hall of Fame organization, its museum and events, visit www.hoophall.com, follow @hoophall and #WestAward or call 1-877-4HOOPLA.