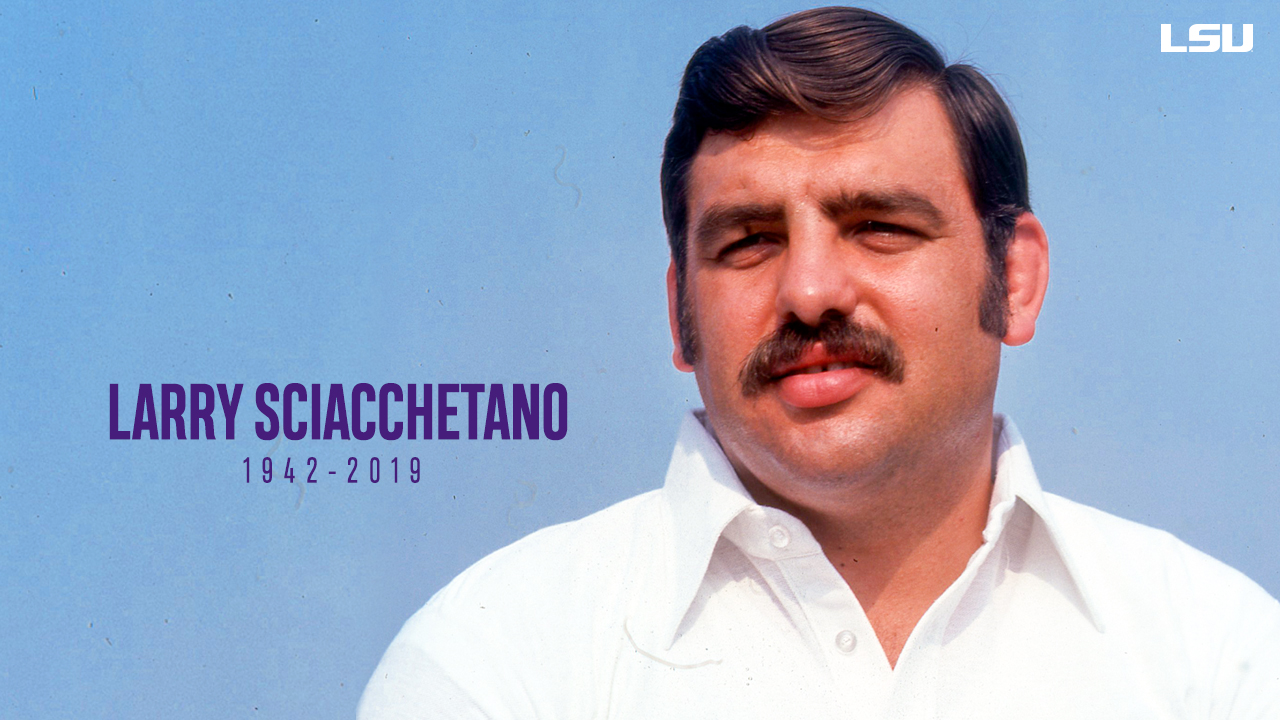 BATON ROUGE – Former LSU and international wrestling coach and administrator Larry Sciacchetano, who this past Friday helped induct the first wrestler into the LSU Athletics Hall of Fame, passed away late Monday at the age of 77.

Born in Jersey City, New Jersey, in 1942, Sciacchetano coached from 1976-85, leading the Tigers to seven Southeastern Conference titles and two eighth-place finishes at the NCAA Tournament.

In a 1978 Sports Illustrated article about northern coaches coming to the SEC to coach wrestling, “Shack” as he was known was described as “six feet, 230 pounds and wears a mustache as big as a broom.”

In the story, Sciacchetano said, “I don’t intend to spend my life coaching (but) there’s nothing in the world that’s as exciting.”

On Oct. 11, 2019, Sciacchetano presented Kevin Jackson for induction into the LSU Athletics Hall of Fame during a ceremony held at the Capitol Park Museum in downtown Baton Rouge. Jackson was a three-time wresting All-America at LSU under Sciacchetano before the University discontinued its wrestling program. He enjoyed a tremendous international wrestling career, and he captured an Olympic Gold Medal at the 1992 Games in Barcelona.

“I was so blessed to have the opportunity to spend last Friday with him at the LSU Hall of Fame induction. He presented me with my award. He was the best coach I ever had. He cared more about my personal life than any athletic accomplishments. I had an opportunity to tell him how much I love him and care about him, how great a coach he was and a better man. He will be truly missed. My heart and prayers go out to his family,” said Jackson in a USA Wrestling release.

He was Coach Shack’s second Olympic medalist as Joseph Atiyeh won silver for Syria in the 1984 Games in Los Angeles.

Jackson’s career was part of Sciacchetano’s lengthy resume’ as a coach and athlete in the sport of wrestling. Sciacchetano was a tremendous wrestling coach on the college level, as well as within international freestyle wrestling circles.

He coached the Syrian wrestling team at the 1984 and 1988 Olympic Games, and assisted the U.S. staff at the 1992 Olympic Games. He coached numerous champions for the New York Athletic Club.

Sciacchetano served five years as State Chairperson of New Jersey in the early 1970s, and has also wrote several books on wrestling.

Sciacchetano was twice awarded the FILA Gold Star, the top honor in international wrestling, both in 1991 and 1995. He also earned the FILA Merit of Honor Award in 2000.  He is a former Secretary of the Pan American Amateur Wrestling Committee (CPLA).

Sciacchetano served two terms as president of USA Wrestling, from 1994-98. During his tenure, the USA won the 1995 World Team Title in freestyle wrestling in Atlanta, Ga., and captured the most freestyle wrestling medals of any nation at the 1996 Olympic Games in Atlanta, Ga. Under his leadership, USA Wrestling experienced growth in its membership at all levels as well as an expansion of its programs and services to the membership.

In 1998, he led the U.S. delegation to compete at the Takhti Cup in Tehran, Iran. It was the first U.S. sports team to travel to Iran to compete in close to 20 years, since the Iranian Revolution. The U.S. tour was reported in the international media. The visit was a major success, and the USA returned months later to compete at the 1998 World Freestyle Championships in Tehran. Sciacchetano was selected to oversee the World Championships that year in Iran.

In 2003 he was named the “Man of the Year” by Wrestling USA Magazine.

He was honored in 2006 with the Order of Merit from the National Wrestling Hall of Fame and Museum. The Order of Merit is presented to individuals who have made significant contributions to the advancement of wrestling, other than success as an athlete or coach. The winner is selected by a vote of the members of the National Wrestling Hall of Fame.

“Larry Sciacchetano was one of our sport’s great contributors, making an impact at every level of wrestling, as an athlete, coach and an administrator at the highest levels. USA Wrestling owes much to Larry Sciacchetano, serving as our president and then with the United World Wrestling Bureau. Our heart goes out to his wife Kathy and his entire family, as well as all of his friends around the world,” said USA Wrestling Executive Director Rich Bender.

As an athlete, he was an undefeated high school wrestler in New Jersey, and won NCAA All-America honors three times in the College Division for Montclair State. He was a finalist in both styles at the 1964 Olympic Trials. He was inducted into the Monclair State Athletic Hall of Fame in 1973.