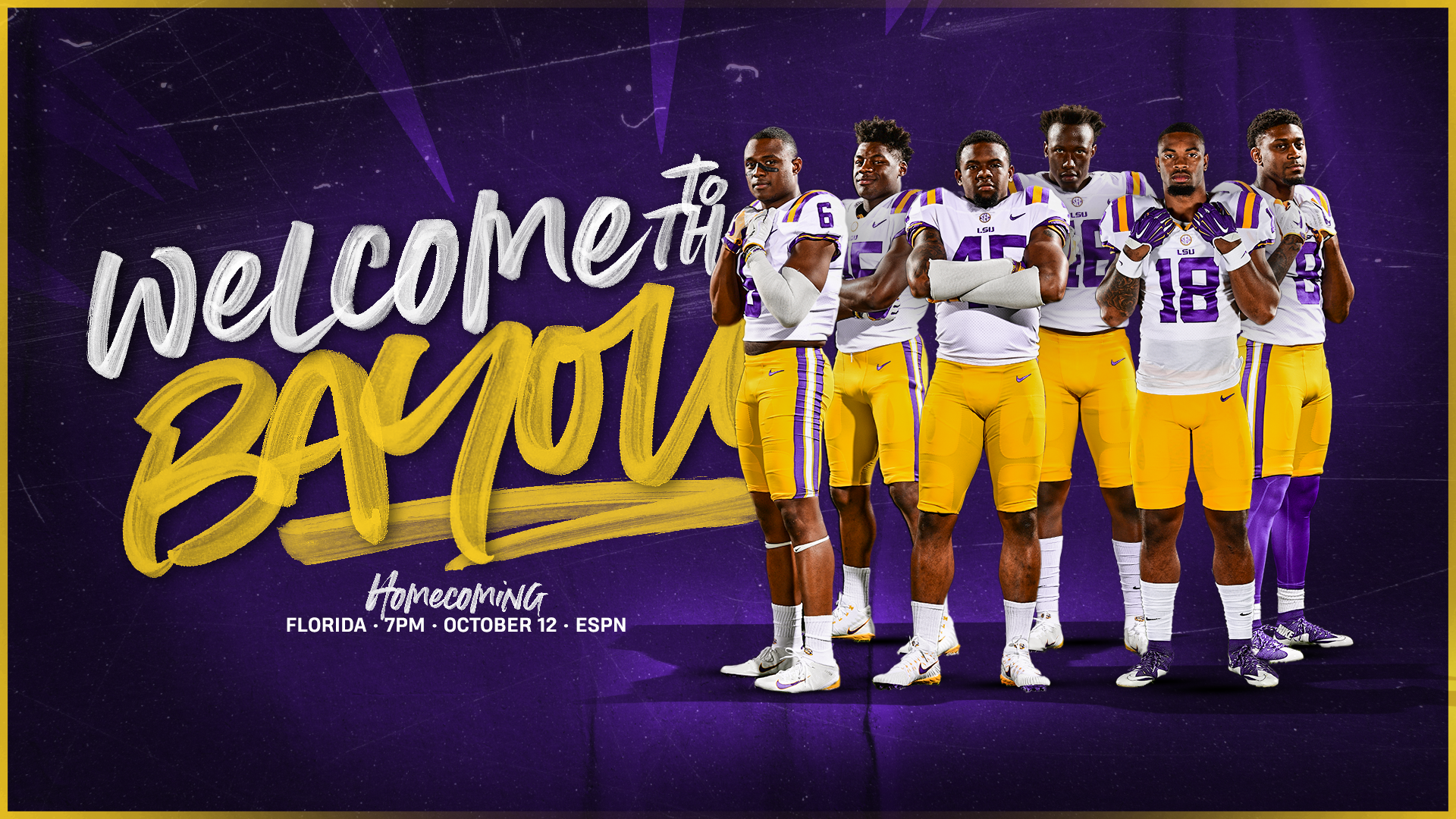 Off to a 5-0 start for the second straight season, No. 5 LSU is set for a Saturday night matchup of undefeated, top-10 SEC rivals as No. 7 Florida comes to Baton Rouge for the first time since 2016.

Kickoff is set for 7 p.m. on ESPN and the LSU Sports Radio Network.

“7:00 Saturday night, Tiger Stadium, LSU-Florida,” says head coach Ed Orgeron. “It doesn’t get much better than that. It’s going to be a wonderful night for the LSU family of Tigers.”

The Tigers will look to avenge a 27-19 defeat in Gainesville last year, which was the second straight contest between the cross-divisional rivals played in Ben Hill Griffin Stadium after Hurricane Matthew caused a relocation of the 2016 contest. LSU’s last home win over Florida came in 2015, a 35-28 victory in another matchup of top-10 teams.

The last time out, LSU rolled past Utah State in a 42-6 win that showcased the Tigers’ strength on both sides of the ball. The offense picked up more than 600 yards of offense and kept the ball for 42 minutes of play, while the defense held the nation’s ninth-ranked attack to 160 yards and no touchdowns, while also intercepting three passes.

And I Wish You Good Luck!

Quarterback Joe Burrow continued his race for the Heisman Trophy. He enters this matchup against an excellent Florida defense ranked first nationally in completion percentage (78.4%), second in yards per game (372.8) and touchdowns (22), and third in passer efficiency (216.2).

The running game continued to thrive against the Aggies, as well, as the Tigers picked up a season-high 248 yards on the ground. Clyde Edwards-Helaire’s five touchdowns rank second in the SEC, while freshmen John Emery (26 carries, 114 yards) and Tyrion Davis-Price (28 carries, 112 yards) continue to grow into their roles.

The unit will face its toughest challenge of the season in Florida, who ranks fifth in the country in scoring defense (9.5 points per game), 10th in total defense (276.3 yards per game), third in sacks (26.0), and first in interceptions (12).

“Ferocious pass rush,” says Orgeron. “They can do it with four men, three men, five, sometimes they’ll do it with six. They’ve got speed, they can tackle in space. It’s a good defense.”

Meanwhile, LSU hopes to return defensive lineman Rashard Lawrence back to the fold, as well as linebacker Michael Divinity and, possibly, another lineman in Glen Logan.

Their challenge will be to hold down a Florida offense coached by Dan Mullen and quarterbacked by Kyle Trask, among the SEC’s most accurate passers at 72.2 percent completions.

“Dan is big formation guy, and he’s going to see how he lines up in a certain formation, and he’s going to try to hit you where your weaknesses are at, so that’s going to be a key for us this week,” Orgeron says. “But after looking at the film, it’s going to come down to blocking and tackling. They ran the speed option on us (last year), we were out of position. They ran the quarterback throw back, we were out of position. We’ve just got to be in position and we’ve got to make plays when we need to make plays.”

A matchup of two talented programs naturally draws national attention, and this week is no exception. ESPN’s College Gameday comes to town for the first time since last season’s matchup against Alabama, and headlines across the country are focusing on the Tigers and the Gators.

Orgeron’s focus, and that of his team, is to block out all the distractions and focus on what goes on between the lines Saturday night.

“We’re going to block out the noise,” Orgeron says. “We’re not going to pay attention to anything that’s going on except the task at hand, and that’s beating Florida. That’s going to be a big monumental task for us, and we plan on getting it done.”