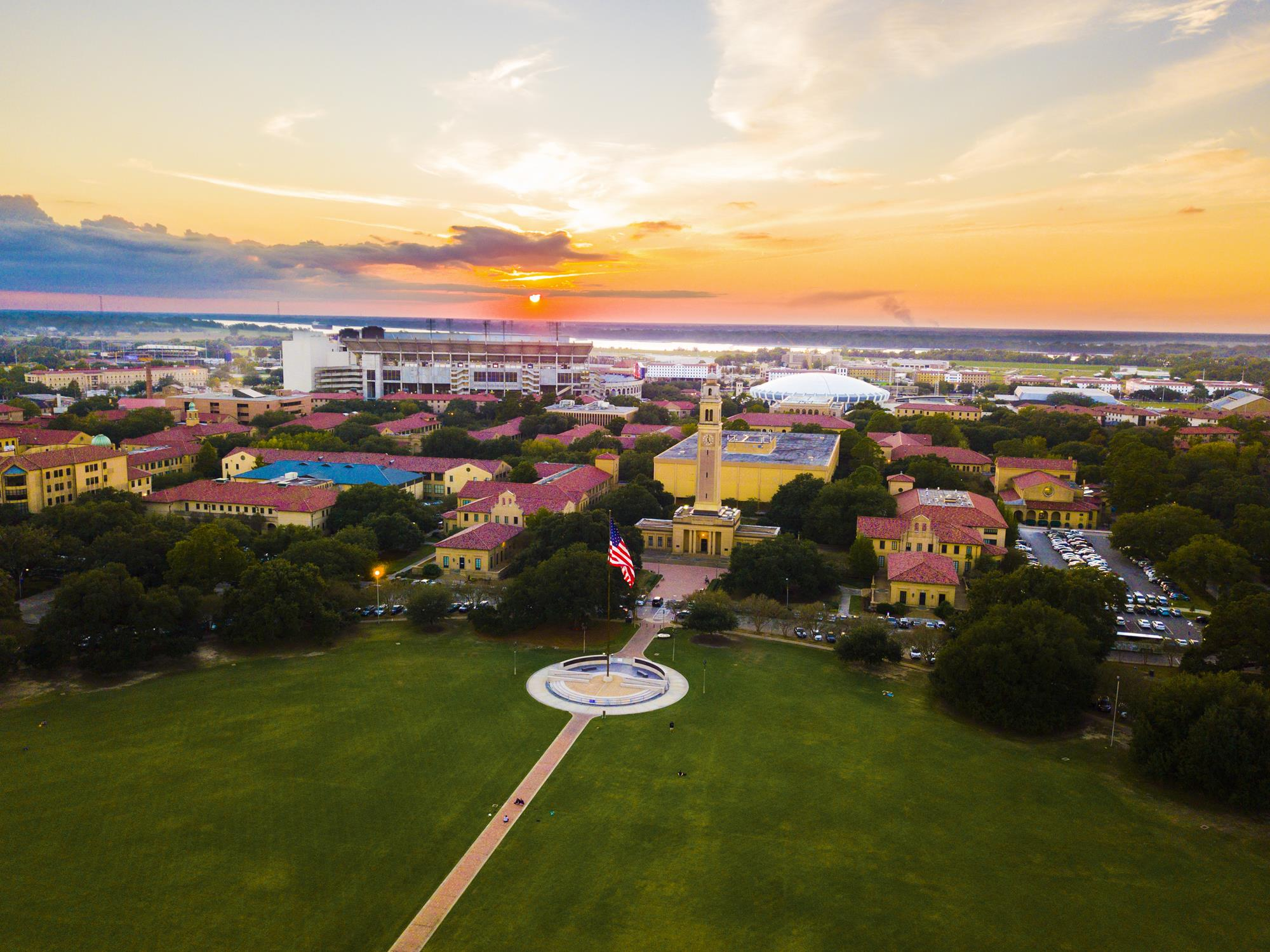 BATON ROUGE – The largest crowd of the season will be on hand Saturday when fifth-ranked LSU hosts seventh-ranked Florida in a Southeastern Conference matchup featuring a pair of undefeated teams. Fans are encouraged to plan for the arrival and departure from campus with the LSUsports.net/gameday website.

LSU is issuing the following reminders to fans coming to campus on Saturday for College GameDay and the game that night:

Pregame Traffic and Parking Recommendations
Fans should plan to arrive on campus earlier than normal and should expect, and be prepared for, heavy traffic all day peaking at around 3-4 p.m. LSU officials ask fans for patience and to plan ahead for the best routes and parking using LSUsports.net/gameday and Waze app. The Waze app is updated in real-time as conditions change and will include restricted on-campus streets, parking lot availability, proper parking lot entrances, and the best route to the desired parking location.

Fans should also have their parking pass readily available and visible to assist officers in directing to the appropriate parking lots.  Fans are also encouraged to call the LSU Guest Services at 225.578.4085 with any parking or traffic questions or issues before arriving on campus.

Parking Reminders | Parking Map
Parking lots open at 7 a.m. on Saturday. Day of game parking for purchase is available on a first-come, first-serve basis on the east side of campus. There are many free lots available on the south side of campus – Old Front Nine, Lot 413, Hayfield Lot, Golf Course, Gourrier South and Levee South

Fans and visitors to campus should be aware that most parking lots will permit vehicles to exit in only one direction after the game. Fans should use the LSUsports.net/gameday website to identify those restrictions for parking lots to ensure they are heading in the desired direction postgame. 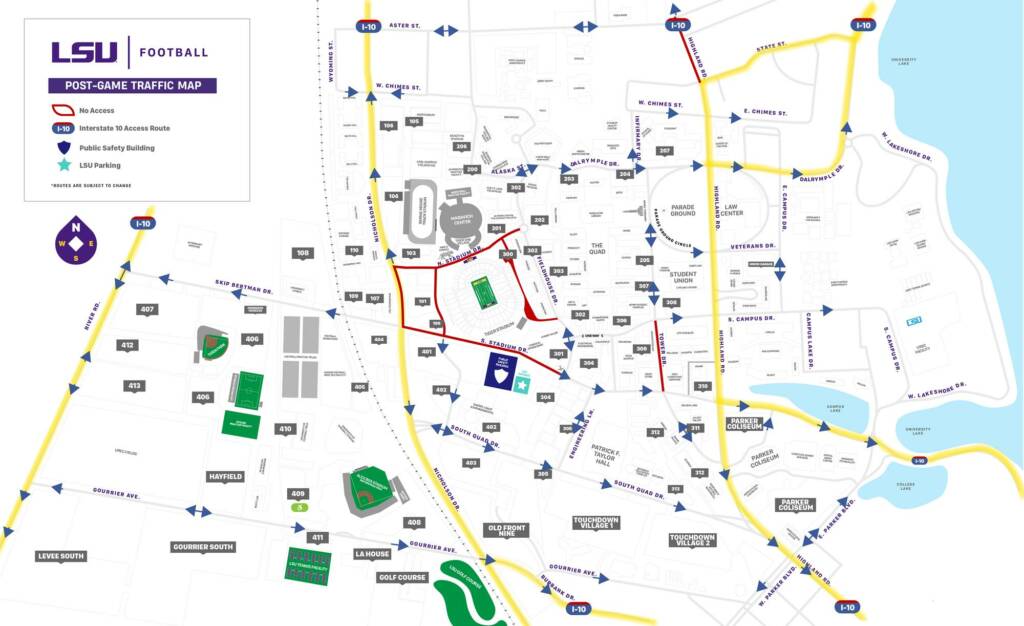 Postgame Recommendations
The Waze app located at LSUsports.net/gameday will help assist fans on their way home. Fans should expect and prepare for heavy traffic exiting parking lots. Once off campus, the goal of traffic control is to keep traffic moving and to get the majority of the fans to the interstate as quickly as possible, not to specific neighborhoods.

Fan are encouraged to adjust their driving habits to keep traffic moving in one direction, and to avoid unnecessary left turns and U-turns which can result in adding to congestion rather than getting to a desired destination quicker. The shortest route is not always going to be the quickest route home.

Fans who are moving south and east from campus, as an example, are encouraged to stay on the main roads of Burbank, Nicholson or River Road until they reach Bluebonnet Blvd. or Siegen Lane, where traffic congestion will ease significantly toward the interstate. As traffic thins out, fans may then utilize the interstate system to backtrack and get to their final destination within the city. This approach can greatly reduce commute times compared to taking a left or U-turn along those main arteries onto other surface streets with heavy and sometimes heavier congestion.

Counterfeit Tickets
Fans should beware of counterfeit tickets which are common for major sporting events such as Saturday’s game between LSU and Florida. Fans should only purchase tickets from family or close personal friends or through StubHub, which is the official marketplace of LSU Athletics. Tickets can also be authenticated by taking them to the LSU Ticket Office.

Homecoming Parade | Parade Map
Fans are reminded that the annual LSU Homecoming Parade will roll through campus beginning at 11 a.m. in front of the Lod Cook Alumni Center on West Lakeshore Drive. The parade route will continue on West Lakeshore Drive to South Stadium Drive, on to Fieldhouse Drive and then Dalrymple Drive. The parade will wrap up on Tower Drive near the LSU Student Union at approximately 12:30 p.m.

13th Gate Now Open
The 13th Gate is now open in downtown Baton Rouge, which could add to the traffic congestion north of campus on Saturday night following the game.

Fans Using Elevators To Get To Their Seats | Seating Chart
With the largest crowd of the year expected for Saturday, fans that take elevators to their seats in Tiger Stadium should plan to arrive earlier than usual to the stadium in order to avoid lines at the elevators.  Gates to the general seating areas in Tiger Stadium open at 4 p.m. on Saturday.

Other Notes of Interest For Saturday Night | Times of Interest
The following is a list of other highlights that will take place at the LSU-Florida game on Saturday night:
•    The SOCOM ParaCommandos will parachute the game ball into Tiger Stadium during pregame ceremonies on Saturday.
•    LSU’s three national championship quarterbacks – Warren Rabb, Matt Mauck, and Matt Flynn – will serve as honorary guest captains for the Florida game.
•    LSU great and 2019 Pro Football Hall of Fame inductee Johnny Robinson will be recognized on the field during the first quarter. Robinson will serve as LSU’s 2019 SEC Football Legend.