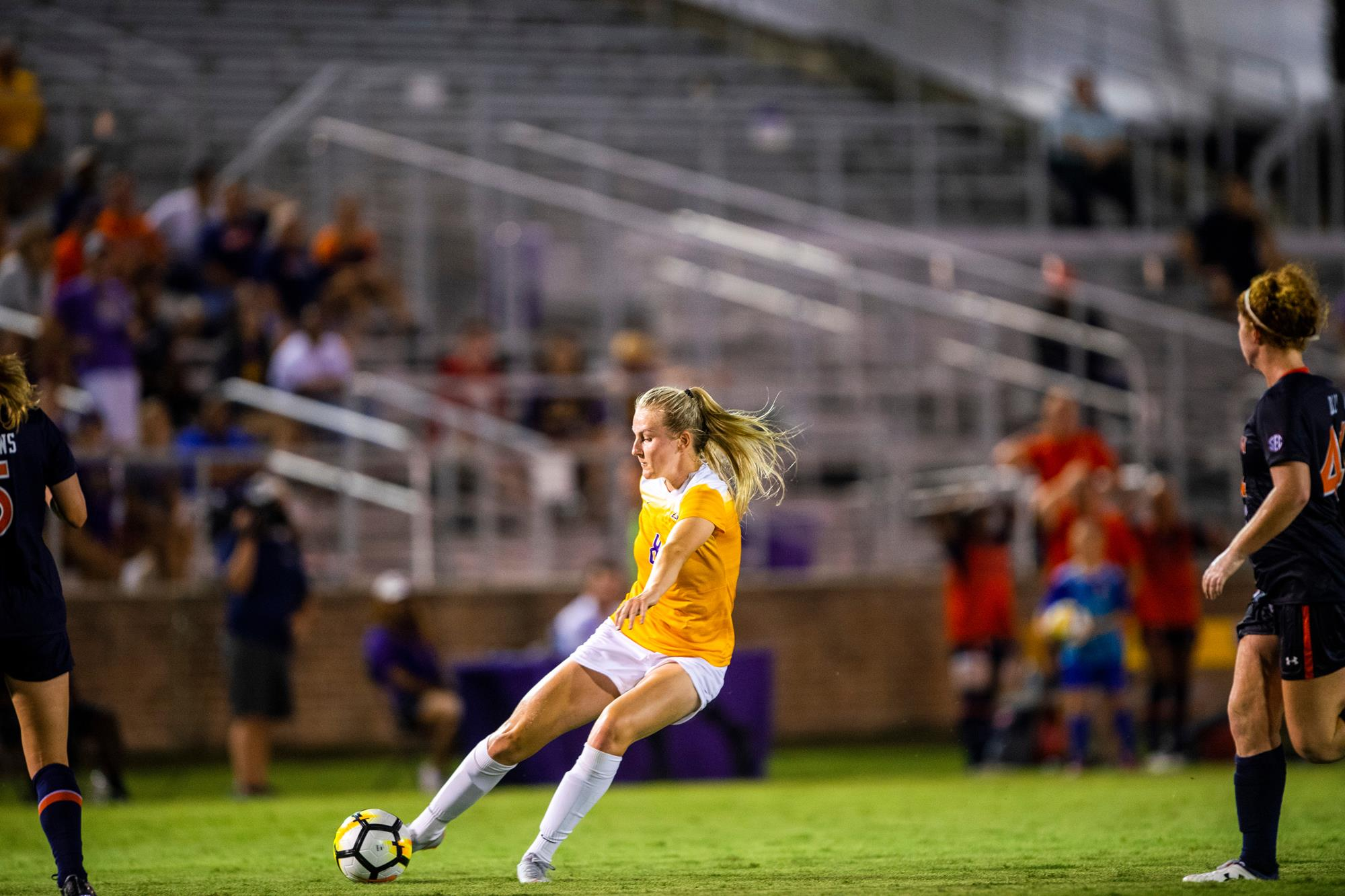 Baton Rouge, La. – The LSU soccer team will play its second-straight match on the SEC Network with a showdown against No. 13 Arkansas on Thursday night at LSU Soccer Stadium. First kick will be at 6 p.m. CT and gates will open at 5 p.m.

LSU owns the advantage in the series with 14 wins, eight losses and three draws against the Razorbacks including a mark of 8-3-2 in Baton Rouge. The Tigers won 10 straight matches in the series from 2004 to 2013. The most recent meeting between the two schools saw LSU claim its first ever SEC Tournament title in 2018. Shannon Cooke equalized the match with a 40-yard bomb in the 72nd minute of the match to make it 1-1. LSU went on to secure the SEC trophy with a 4-1 decision in penalties.

The Razorbacks enter Thursday night’s match with a record of 9-2-1 (3-1-0 SEC) on the season. Arkansas has only allowed three goals all season long and ranks seventh nationally with eight shutouts on the season. The Razorbacks have ranked wins over No. 1 North Carolina, No. 15 Vanderbilt, and No. 22 Baylor. Parker Goins and Anna Podojil share the team lead with six goals apiece. Katie Lund is the Razorbacks’ primary keeper having played in all 12 matches; she owns a GAA of 0.25 to go along with a save percentage of .927.

Fans are encouraged to wear gold and the first 250 fans in attendance will receive a free LSU soccer gold t-shirt. Gates open at 5 p.m. CT.

Goldman has been up to task this season in net for the Tigers consistently being challenged. Her 71 saves on the season lead the SEC and she is saving an SEC high 6.45 shots per match. She had one of the all-time great LSU performances in net against Georgia on Sept. 26 as LSU earned a 1-1 draw thanks in large part to her performance. She made 16 saves in that match, the second most in LSU single game history alongside Shelli Montevirgen’s 16 save match against Georgia in 1996. The 16 saves were one short of the LSU school record set by Bonnie Otillio in 1999 against Oklahoma. Goldman has started 11 matches for the Tigers and has a save percentage of .807 to rank fifth in the SEC; her 16 saves against Georgia are the most by any keeper in the league this season.

The Tigers didn’t get a result against Auburn, but they played some of their best soccer of the season. The final score was 2-0 in Auburn’s favor but that doesn’t depict the kind of soccer LSU played. The Tigers registered a season high seven corners and had multiple chances to score some goals.

The Tigers have played as many as seven first-time players on the pitch at once this season. A total of 9 players have made their LSU debuts this season. Maddie Moreau is the lone first-year player to start all 12 matches. Rammie Noel (11 starts), Emma Grace Goldman (11 starts), Meghan Johnson (9 starts), Anna Rockett (6 starts), Maya Gordon (6 starts), Sydney Lau (1 start), and Maddison Martin (1 start) have all earned the first starts of their career this season as well. Hannah Cuneo (7 matches) and Makenzie Maher (8 matches) have all earned their first playing time for the Purple and Gold this season. Jade Clarke made her first start of the 2019 season and the 17th start of her career last Thursday against Auburn.