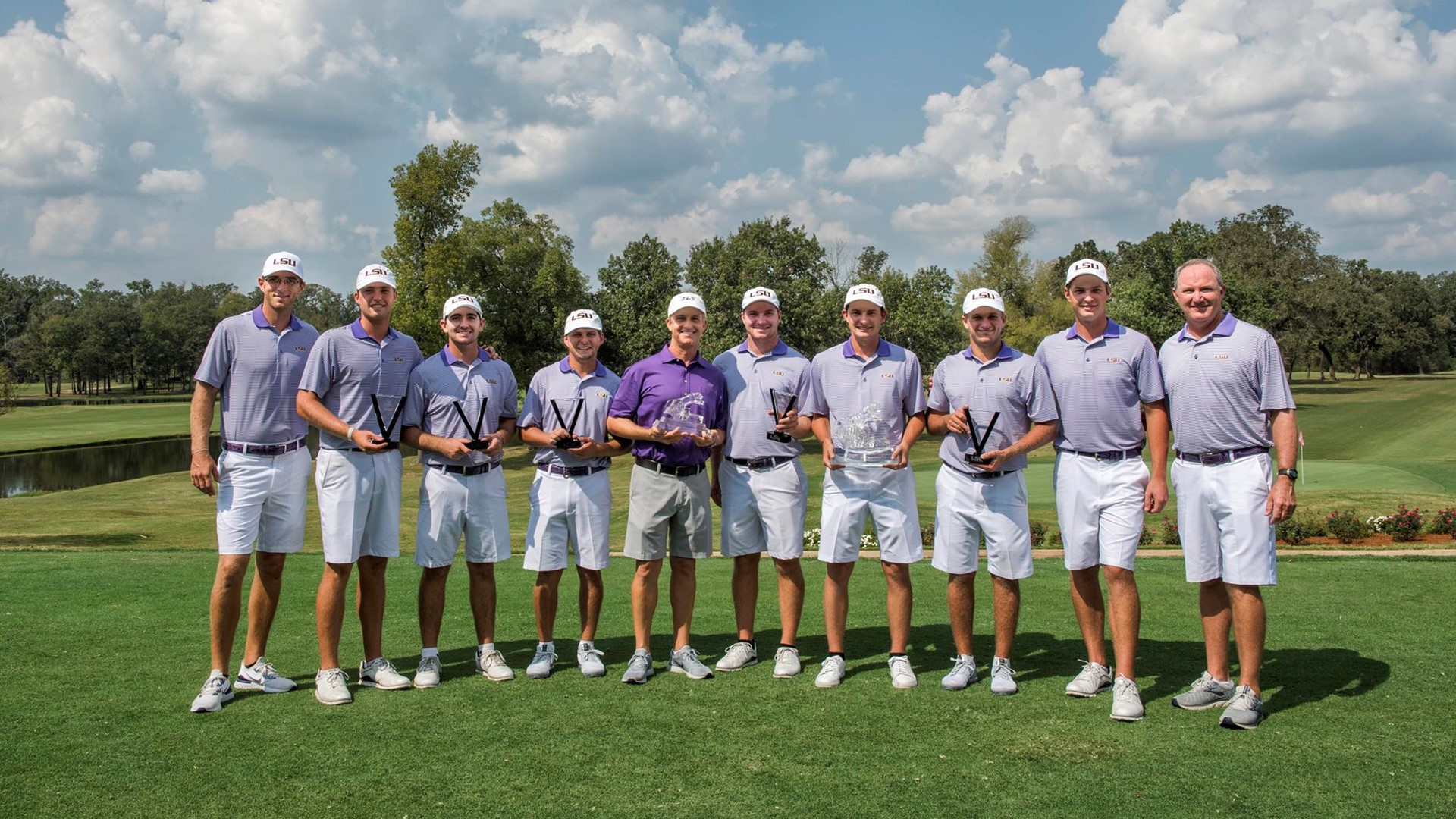 Shreveport, La. – The LSU men’s golf team capped off the best team performance in program history with an other-worldly team score of 63-under 801 (267-263-271) to claim the title at the 2019 David Toms Intercollegiate at Southern Trace Country Club. Trey Winstead (Baton Rouge, La.) and Hayden White (Benton, La.) of LSU shared co-medalist honors at 17-under 199.

The 63-under 801 absolutely shattered the previous LSU best for team score at a tournament. The old record was a 41-under 811 that was shot in 2016 at the Maui Jim Intercollegiate. It was a 37-stroke win for the Tigers over the next closest competition. Memphis took second with a 26-under 838.

“Proud of the guys,” Chuck Winstead, director of golf at LSU, said. “The conditions were nice and there was basically no wind this weekend, but you still have to hit the shots. I’m extremely proud of our whole group and how they played this weekend. (I’m) thrilled for Hayden and Trey as well. They played some solid golf these last two days.”

Winstead matched his collegiate career low of 7-under 65 on Sunday and White used a 4-under 68 to share medalist honors with his teammate. White’s Sunday card featured a steady five birdies, 12 pars and one bogey, while Winstead went off with nine birdies, seven pars and two bogeys. The nine birdies by Winstead are a career high. The co-medalists ended the tournament at 17-under 199 to set new career three-round tournament lows; the 17-under 199s matched the LSU school record for a score to par for a three round tournament. Luis Gagne shot a 17-under 196 at the 2016 Maui Jim Intercollegiate. Winstead now has two collegiate tournament titles (2018 David Toms Intercollegiate & 2019 David Toms Intercollegiate), while the win for White was the first of his collegiate career.

Garrett Barber finished in solo third at 15-under 201 (69-63-69); the third-place  finish matches the best finish of his collegiate career. Sunday’s final round saw him shoot a 3-under 69 with five birdies, 11 pars and two bogeys. It’s his second straight top-10 finish and the third overall of his career.

Philip Barbaree continued his elite play to begin his senior season with a 11-under 205 (65-70-70) to tie for fifth place. Barbaree has finished tied for third (Maui Jim Intercollegiate), tied for fourth (Inverness Intercollegiate) and tied for fifth (David Toms Intercollegiate) to start the season. Barbaree started on hole No. 3 Sunday and was 2-over through his first 14 holes of the day. The Shreveport native rattled off four straight birdies (Nos. 17, 18, 1, 2) to close with a 2-under 70. Barbaree now has 12 top-10 finishes during his LSU career which ranks him tied for 15th on the school list alongside Brandon Pierce and Andrew Presley.

Michael Sanders picked up his first top-10 finish of the season with a three round tally of 8-under 208 (71-68-69) to finish in a tie for ninth place. His final round scorecard was unblemished with three birdies and 15 pars; it was the third time in his career that he has had a bogey-free round.

Chris Woollam played his best round of the tournament and finished in a tie for 22nd at 1-under 215 (71-76-68). Much like Sanders, Woollam didn’t have a mistake on his scorecard as he racked up four birdies to go along with 14 pars. It matched his collegiate career low that he registered a year ago at the David Toms Intercollegiate. Drew Gonzales finished in 68th place at 32-over 248.

Up Next
The Tigers will close out their fall schedule with a trip to the Tavistock Collegiate (Oct. 20-22) in Windermere, Fla., at the Isleworth Golf and Country Club.