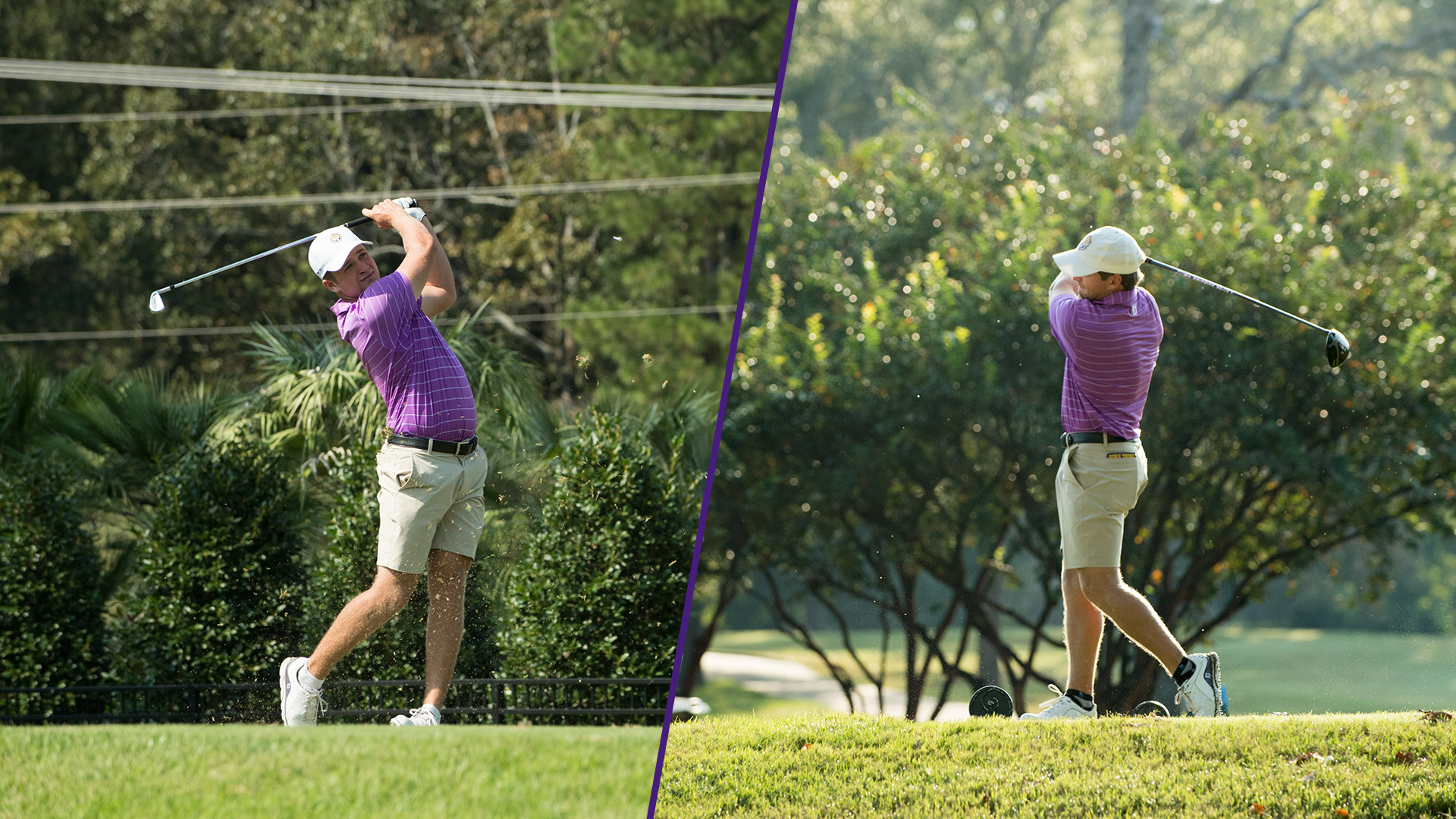 Shreveport, La. – The LSU men’s golf team shot the lowest two rounds in relation to par in school history on day one of the David Toms Intercollegiate at Southern Trace Country Club on Saturday. Hayden White and Garrett Barber matched the school record for lowest individual rounds in relation to par with 9-under 63s in round two as well on a banner day for the golf program.

The Tigers’ two-round total of 46-under 530 (267-263) is 28 shots better than Arkansas Tech, who sits in second place at 18-under 558. It was a 21-under 267 in round one for LSU for the initial school record in relation to par, and then just four hours later the Tigers cut four shots off the school record with a 25-under 263. The school record for lowest team round entering Saturday was a 19-under 265 (par 71) that was shot at ‘The Prestige’ in 2016. A full list of the best team rounds in school history can be found at the bottom of this release.

Thanks to their school records in relation to par, White (13-under) and Barber (12-under) sit atop the individual leaderboard. They joined Sam Burns as the only players to shoot a round 9-under in LSU history. Burns shot a 9-under 62 in 2017 at the Ka’anapali Collegiate Classic. The 9-under 63s also matched Burns’ course record of 63 that he shot back in 2016. Burns, who currently plays on the PGA Tour, shot his 63 at Southern Trace in a non-competitive round. The 63s are the lowest competitive rounds shot at Southern Trace Country club since it was redesigned in 2007.

LSU actually owns the top four spots on the individual leaderboard with Trey Winstead (10-under) and Philip Barbaree (9-under) sitting in third and fourth place, respectively. Michael Sanders is in a five-way tie for ninth place at 5-under par.

Round One Recap
Philip Barbaree and Trey Winstead paced LSU in round one with collegiate career lows of 7-under 65s. Barbaree’s round was highlighted back a back nine score of 5-under 31. He made the turn after playing the front nine at 2-under 34 (three birdies, five pars, one bogey). The back nine of his was flawless featuring an eagle, three birdies and five pars. He went from 3-under for the round after 15 to 7-under after 18 thanks to a birdie, birdie, eagle finish. Winstead himself had a pair of eagles on the round – the par 5 8th and the par 5 14th – as well to go along with four birdies. He had 11 pars and one bogey during the first round as well. The 7-under 65s by Barbaree and Winstead are tied for the sixth lowest rounds to par in LSU history.

Hayden White registered what was the lowest round of his career with an opening 4-under 68. He made three birdies on par 3s to go along with a pair of birdies on par 5s. After that, he had 12 pars and only one bogey. Garrett Barber had a 3-under 69 to round out LSU’s team score of 21-under 267. Michael Sanders and Chris Woollam carded 1-under 71s and Drew Gonzales had a 16-over 88.

Round Two Recap
Round two was the Hayden White and Garrett Barber show. White’s second round featured an immaculate seven birdies, an eagle and 10 pars for his 9-under 63. It was the lowest round of his career and it marked the first time collegiately that he played 18 holes without a bogey. The eagle came on the 18th hole when he pitched in from 13 yards out.

Barber’s card featured eight birdies, one eagle, eight pars, and one bogey. It’s the second time in his collegiate career that he has rolled in eight birdies in a round. The highlight of his round had to be the 199-yard 6 iron that he played into the 18th green. Hitting two, his 6 iron stopped no less than three feet from the pin for a tap in eagle.

Michael Sanders (4-under 68) and Trey Winstead (3-under 69) were the final two team scores that pitched in towards the school record as a team. Philip Barbaree played to a 2-under 70 to maintain his spot in the top five at fourth place. Chris Woollam (4-over 76) and Drew Gonzales (7-over 79) rounded out play for the day.

Up Next
The Tigers will tee it up for the final round of play on Sunday with an 8:30 a.m. CT shotgun start at Southern Trace CC.