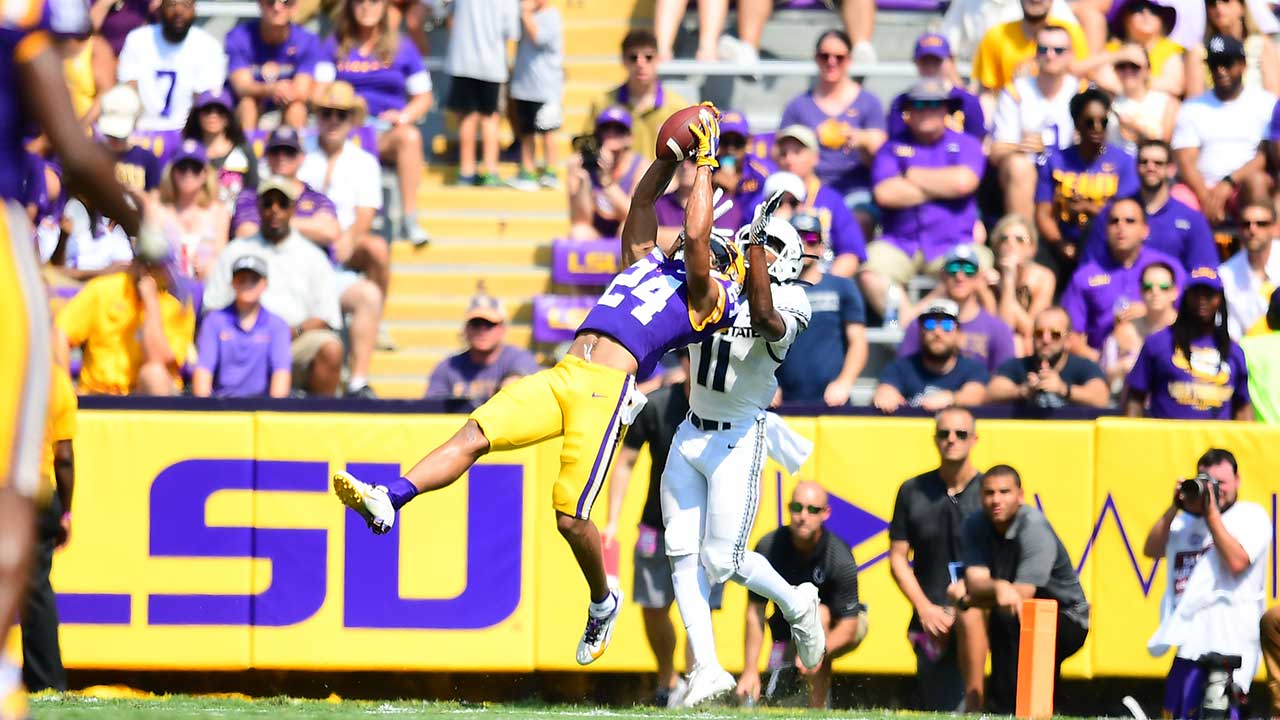 BATON ROUGE — Fifth-ranked LSU outgained Utah State, 601-159, on its way to a midday victory that wrapped up non-conference play for the Tigers, 42-6, on Saturday in Tiger Stadium.

Overcoming a pair of turnovers, LSU (5-0) was again led by quarterback Joe Burrow, who completed 27-of-38 passes for 344 yards with five touchdowns. His interception midway through the first quarter came on a tipped pass. Burrow also ran for a 1-yard score early in the second quarter.

Wide receiver Justin Jefferson led LSU with nine catches for 155 yards and two touchdowns, while tight end Thaddeus Moss caught five passes for 39 yards including an 8-yard TD that gave LSU the final margin with 13:23 to play in the fourth quarter.

Defensively, LSU took advantage of its open date and came back looking like the squad the Tigers have been known to be. LSU allowed only 1-of-12 on third downs, recorded 10 tackles for loss and interceptions by Grant Delpit, Derek Stingley Jr. and Kary Vincent Jr.

Patrick Queen led the Tigers with six tackles, as Utah State ran only 53 plays and tallied only 56 yards of total offense in the second half.

Utah State fell to 3-2 on the season. The Aggies’ quarterback, NFL prospect Jordan Love, was limited to 15-of-30 passing for 130 yards with three interceptions. Utah State managed only 19 rushing yards on 22 attempts and was sacked twice.

Aggies placekicker Dominik Eberle made first-quarter field goals of 30 and 47 yards to keep the game close, but the Tigers scored twice in the second quarter and led 21-6 at the half. Two more LSU touchdowns in the third quarter put the game on ice.

The Tigers return to action Saturday, Oct. 12, when Florida comes to Tiger Stadium for a 7 p.m. CT kickoff. Tickets and parking for the remaining games of the schedule are available at www.LSUtix.net.

Read the complete recap below.

LSU took the opening kickoff and drove 75 yards on 12 plays, with the march culminating on a seven-yard TD pass from quarterback Joe Burrow to wide receiver Derrick Dillon at the 10:41 mark of the first quarter.

Running back Clyde Edwards-Helaire was instrumental in the drive, as he rushed four times for 28 yards and caught one pass for 12 yards. He also surpassed the 1,000-yard career rushing mark during the possession.

Utah State forced the first turnover of the contest when cornerback Cameron Haney intercepted a Burrow pass at the LSU 26 and returned it to the five-yard line. The Tiger defense kept the Aggies out of the end zone before Dominik Eberle connected on a 30-yard field goal to reduce the deficit to 7-3 with 6:25 left in the opening period.

After Utah State stopped LSU on a fourth-and-one at the USU 35, the Aggies moved 35 yards on five plays to narrow the gap to 7-6 at the 1:45 mark of the first quarter when Eberle nailed a 47-yard field goal.

LSU responded by moving 74 yards in six plays as Burrow executed a one-yard sneak over the goal line, giving the Tigers a 14-6 lead with 14:03 left in the second quarter. The drive was ignited by a 38-yard pass from Burrow to wide receiver Justin Jefferson to the Utah State 36-yard line.

Utah State drove to the LSU 29 early in the second period, but cornerback Derek Stingley Jr. intercepted a Jordan Love pass at the one-yard line to stop the march.

The Tigers then surged 99 yards in 13 plays and increased the lead to 21-6 when Burrow hit wide receiver Ja’Marr Chase with a 25-yard scoring pass. The key play in the drive was a 19-yard Burrow completion to Dillon on third-and-15 at the LSU 24.

LSU drove 53 yards on 11 plays on its first possession of the second half to seize a 28-6 advantage. Burrow’s three-yard pass to Jefferson finished the march with 9:55 remaining in the third period.

Burrow connected with Jefferson again with 2:54 left in the third quarter, this time with a 39-yard TD strike. The play capped a 63-yard, four-play possession and widened the gap to 35-6.

LSU cornerback Kary Vincent intercepted a Love pass late in the third quarter, returning it to the USU 44-yard line. From there, the Tigers scored in seven plays as Burrow fired an eight-yard touchdown pass to tight end Thaddeus Moss, increasing the margin to 42-6 with 13:23 left in the game. The play marked the first LSU career TD reception for Moss, a transfer from North Carolina State.