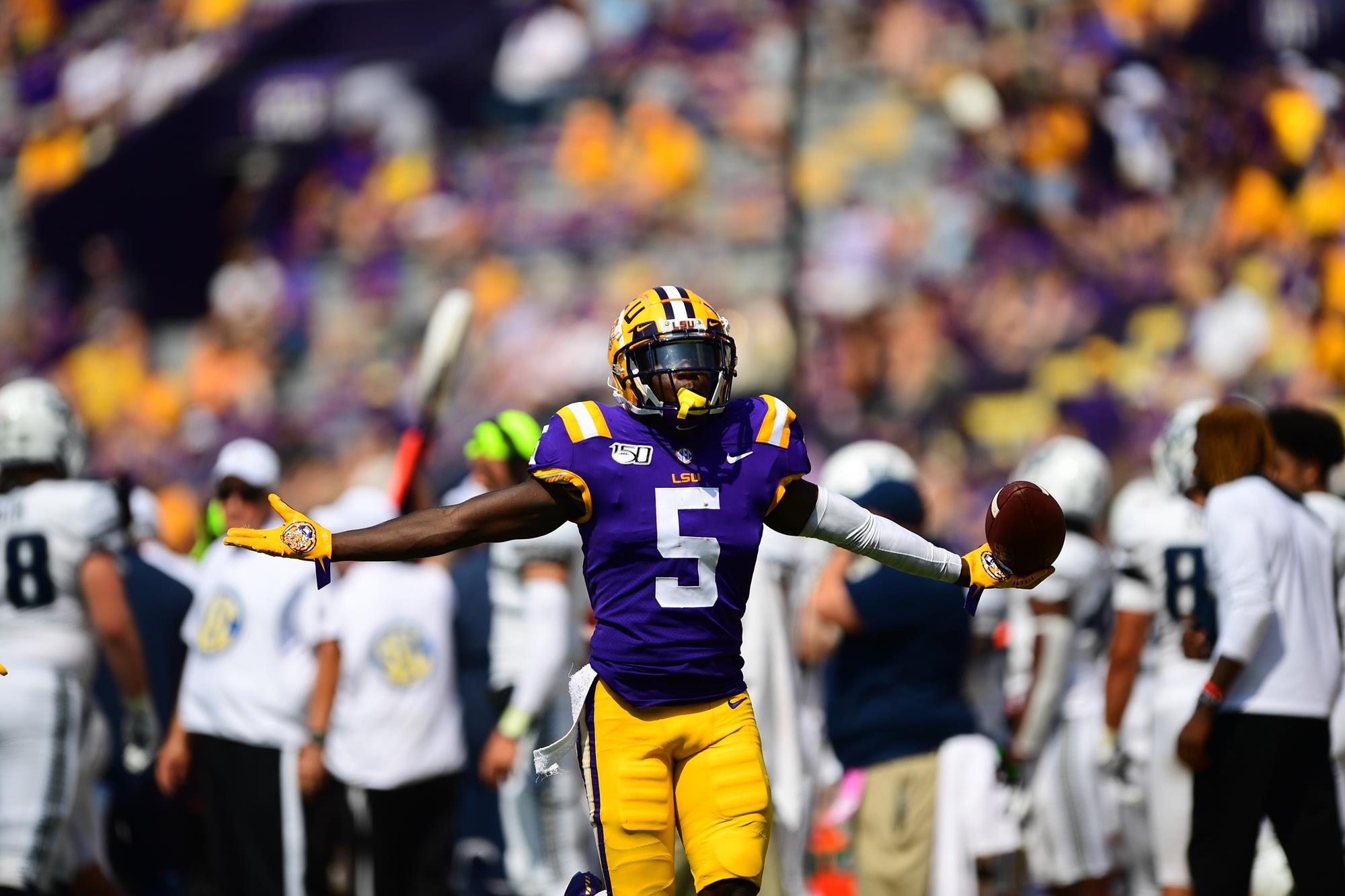 How do you slow down one of the fastest offenses in the country?

To stop “warp speed,” a defense must itself play at warp speed. On Saturday, LSU’s defense bore that truth out against a prolific, up-tempo Utah State offense, silencing its doubters and slowing down the Aggie attack with sheer, devastating velocity in the Tigers’ 42-6 victory.

Utah State arrived with the nation’s ninth-ranked offense, a scheme built on one of the fastest tempos in the country.

They left with seven punts, six points, and no touchdowns.

The Tigers’ speed was on display in all defensive facets Saturday. They attacked a hurry-up offense with hurry-up defense, racing to the ball almost as fast as they raced off the field.

There was Patrick Queen, showcasing sprinter’s speed while chasing down Aggie ball carrier for six tackles, three of which went for a loss.

There was Derek Stingley, racing down the sideline and leaping for his second interception in as many games, a pick he made look so easy that one couldn’t be blamed for thinking the pass was intended for him all along.

There was Grant Delpit and Kary Vincent grabbing interceptions of their own, Neil Farrell sacking Utah State quarterback Jordan Love on a three-man rush, and Fehoko flying into the backfield for one of the Tigers’ 10 tackles for loss.

There was just 159 yards for an offense averaging well over 500 per game.

It was, for LSU, the product of two weeks of self-evaluation and preparation, culminating in their finest defensive outing of the season.

All that speed on the field meant the Tigers spent little time on it. The only direction Utah State’s offense hurried was back to the sidelines. An offense that entered the contest averaging more than 80 plays per game snapped the ball just 53 times to LSU’s 90. Their longest drive of the second half lasted five plays, seven drives lasted less than a minute, five drives lasted only three plays, and three drives went backwards.

Fehoko and Phillips each cited similar keys. For the defensive lineman, it was about getting ahead of the chains on defense, keeping Utah State from picking up big plays on first down. The Aggies rushed for just 20 yards on 11 first down carries and completed just 7 of 12 first down passes for 75 yards and one pick.

“If they’re going to win the first down battle, it’s going to be a long day for us,” Fehoko said. “But if you have a team on second and eight, second and seven, now that’s better than second and four, second and three. That’s huge for us.”

Phillips agreed, saying that while Utah State brought in one of the highest-producing passing attacks in the country at more than 300 yards in the air per game, LSU focused on shutting down their running game entirely.

“I think when you can’t establish the run against us there’s no way you can beat us,” Phillips said.

If LSU was good on first down, it was great on third down, holding Utah State to 1-of-12 third down conversions.

No matter the down or distance, what set the stage for LSU’s execution was its preparation. The Tigers were ready for the Aggie pace after two weeks of practicing against a scout team offense going at “warp speed” – LSU’s lingo for “as fast as you can go,” Orgeron said.

“The speed in practice was fast,” Phillips said. “Sometimes the offense didn’t even know what they were doing because they were going so fast, and in the game, it was really that fast. As soon as the referee stepped out of the way, the ball was being snapped.”

But as soon as the ball was snapped, the Tigers were flying toward it. And when the tackles were there for the taking, they took them. Citing 18 missed tackles that cost LSU 148 yards two weeks ago against Vanderbilt, Orgeron drilled the team on the fundamentals for two weeks, working on angles, footwork, and wrapping up.

“You could see our guys running, chewing up all the grass,” Orgeron said. “Our guys were going fast. I thought that all the tackling drills that we worked, with the angles and the footwork, showed up today.”

Offensively, LSU altered its approach, too, establishing the run and, in contrast, slowing things down a bit. Joe Burrow stayed hot, completing 27-of-38 for 344 yards and five touchdowns, while adding another on the ground, but the Tigers ran it early and often, too, with Clyde Edwards-Helaire (14 carries, 72 yards), Ty Davis-Price (11 carries, 53 yards), and John Emery (8 carries, 45 yards) all happy to eat yards and clock.

Utah State wants to go fast on offense, but because LSU’s offense was sustaining long drives (and Utah State wasn’t), the Aggies had to slow down on offense to let their defense rest. pic.twitter.com/b3BG0KGzKA

“I think they slowed down their tempo a little bit, because of our offense. It’s a chess match…We’re so used to having fun, going up and down the field and scoring, everybody’s happy,” Orgeron said. “It was methodical, we were chewing up some clock, and the defense was resting, so it worked.

It was more fun than the last two weeks of defensive reflection, which Orgeron likened to “going to the dentist every day.” After subpar showings against Texas and Vanderbilt, the Tigers had some defensive cavities to fill and a bad taste in their mouths.

After a stellar, supersonic showing Saturday, they’re all smiles.

“If our defense plays like that,” Orgeron said, “we can do anything we want.”