Meredith Duncan is a Tiger for Life 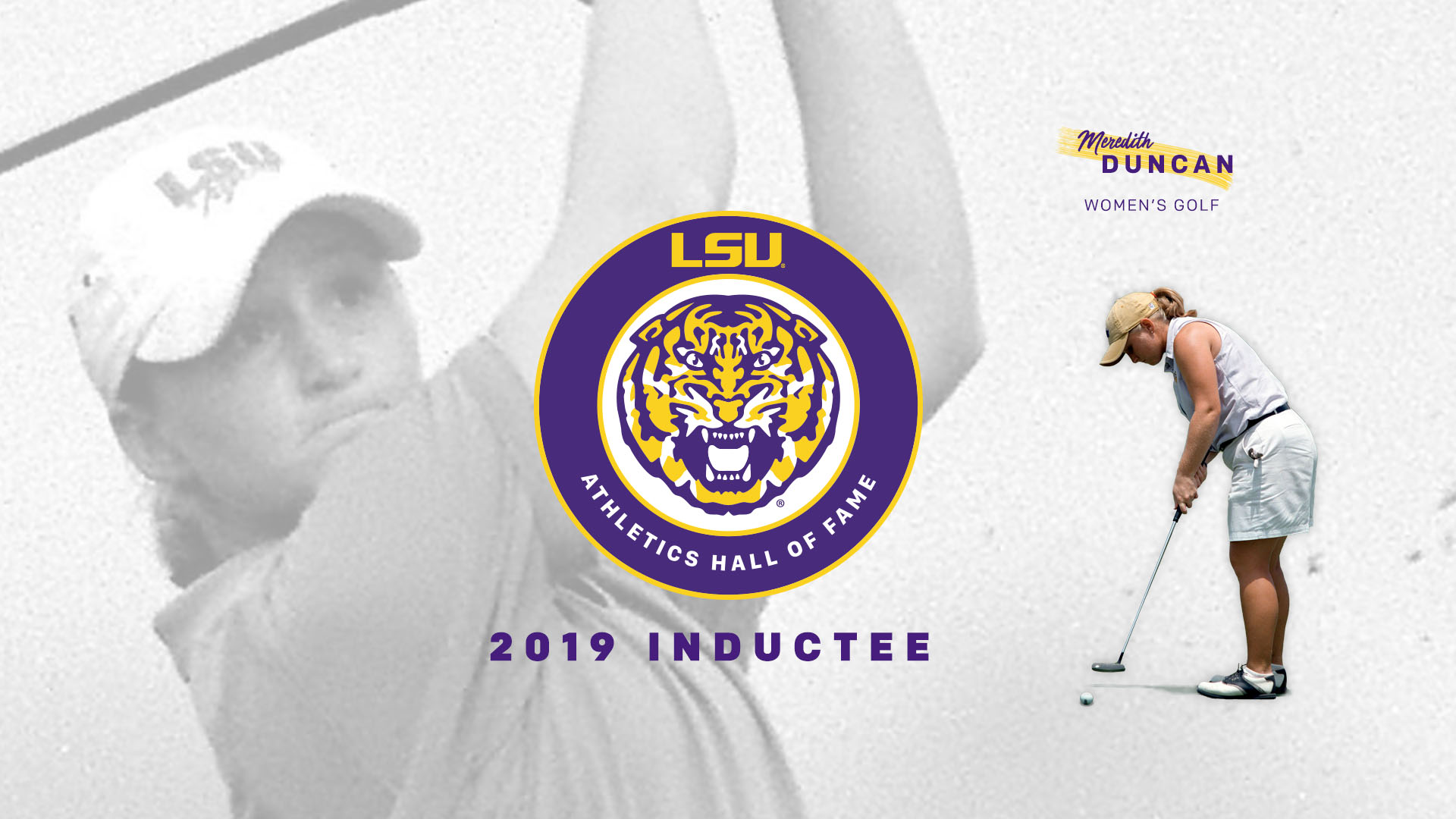 It just seems appropriate that Meredith Duncan is coaching a high school in her hometown of Shreveport, La., where the colors are purple and gold.

Those two magical colors have been her favorite since she was a child.

Now the purple and gold will be draped on her forever as she steps into the LSU Athletics Hall of Fame in ceremonies on Friday, Oct. 11, at the Capitol Park Museum in downtown Baton Rouge.

“I have bled purple and gold from the time I was really little,” Duncan said. “I knew I wanted to be a Tiger for life.”

Duncan becomes the second women’s golfer at LSU to go into the LSU Athletics Hall of Fame, joining Jenny Lidback, who was inducted in 2009.

“I always thought those types of awards were only meant for the Billy Cannons and Shaquille O’Neals of the world,” Duncan commented on her feelings about going into the HOF. “A few weeks ago, I was in the L Club looking at the names on the wall, and it hit me that my name will be on that wall, too. It’s crazy to think that all because I wanted to chase a little white ball around, my name is going to be right next to the greats of LSU. It’s an absolute honor to be able to represent LSU women’s golf in the Hall of Fame.”

Duncan’s LSU career was definitely Hall of Fame worthy as a three-time All-American and a three-time Women’s Golf Coaches Association All-Scholar selection playing from 1999-2002 in an era when the women’s golf team under Coach Karen Bahnsen was a regular NCAA fixture. Duncan had 21 Top 10 finishes at LSU (3rd all-time at the school), a 73.12 scoring average in 2002 (6th all-time) and a career average of 75.01 (7th all-time). She is one of seven LSU golfers to win three titles or more during her career.

Something about Duncan in recruiting her struck a chord with Coach Bahnsen.

“It came down to her and another girl from Louisiana,” Bahnsen recalled. “I had to make a big decision. There was just something about Meredith I really loved. I liked everything about what she brought to the table, her competitiveness, her personality. She wasn’t projected to do the things she did, but I just thought there was something special about her. I can’t explain some of it, but there was something in my heart and obviously, it turned out great.”

Duncan had many highlights in her career, but two stand out. In May 2000, she turned a lousy beginning to the NCAA Championships to a seventh-place finish, and the following summer in 2001 when she won three major amateur titles between her junior and senior seasons, including the prestigious United States Women’s Amateur.

The then-sophomore opened play on the Sunriver, Ore., course with a 10-over par score of 82.

“I shanked it six times, had six doubles,” Duncan recalled. “I was embarrassed and stunned but wanted so bad to fix it that Karen (Bahnsen) and I went to the range.”

The only problem was that it was near dark and the maintenance crew had picked up all the range balls.

“We found some balls in a ditch and hit balls until there was no way I would do that again. I was in 117th place after Day 1.”

“Meredith had played the practice round and hit it fine,” said Bahnsen, who played for LSU and later coached the women’s golf team at LSU from 1985-2018. “But after that round, we went to the range and it was closed. We picked out enough balls so she would have enough to hit, and I gave her this little tip and she went out and played great after that.”

“That was the moment I knew that with hard work and determination anything is possible,” she said.

In 2001 after a good junior season, Duncan had a summer that has never been repeated in amateur golf, winning the Western Open for a second time, the North-South Women’s Amateur and then winning the United States Women’s Amateur title in a classic match live on national television.

Duncan was the co-medalist in qualifying and ran through the matches to face 17-year-old Nicole Perrot of Chile.

Duncan had a four-up lead at the lunch break in the 36-hole final, only to have Perrot come back to tie the match on the 34th hole. On the 36th hole, Perrot dropped a 25-footer for birdie, setting off a celebration thinking that might be the winner. But Duncan calmly got up and rapped in an eight-footer showing little emotion as she walked off the green to the first extra hole – a par three that was all-carry over water.

After Perrot’s ball was some 18-feet past the hole, Duncan posted an all-time shot that hit and spun right toward the hole, leaving her two feet for birdie. After Perrot missed, Duncan tapped in the winning putt for the title and a victory leap into her father David’s arms, who was her caddy for much of the summer. Duncan was an amazing 20-1 that summer and never trailed through the final 94 holes of the Amateur.

“I try to think back on it and remember what I was focused on and all I can think is that I wanted to beat everybody that I played,” Duncan said. “I recently found and watched the final round of the U.S. Amateur and watched as my Dad and I teamed up to win it. That was a very special summer having him on the bag with me every step. He passed away from pancreatic cancer in 2003, and I’m so happy we were able to spend that summer together.”

“It was just so special,” said Bahnsen of that summer of 2001. “I was so glad she got to share it with her dad and mom and her whole family. Meredith is just one of those special people that everyone loves her to death. She’s got a big personality in a great way. She goes out there and has no fear. She’s so competitive. So to win the Women’s Western, the North-South and the Women’s Amateur all in one summer; that’s unprecedented. I was so happy for her, and don’t forget she represented the United States in the Curtis Cup in 2002.”

Some thought Duncan might head to the pros after that summer but she would tell people, “Heck no! Do you think I’m going to miss my senior year with my best friends and football games?

“My time at LSU was absolutely amazing for so many reasons,” Duncan recalled. “I was so blessed to have Karen Bahnsen as a coach. She was one of the main reasons I came to LSU in the first place. She not only made me a better golfer, but more importantly a better person. She taught me what it means to love your players like you do your own children. She treated us with love, respect, toughness, enthusiasm, and a pure joy for everything LSU that made all of us want to be the best we can be.”

Duncan went on to play 10 years on the LPGA Tour. “I had some good years and some bad years,” she remembered. “I traveled the world, met some amazing people and learned more about myself and how to survive in good and bad times. Tour life isn’t for the weak.”

But back issues started to run her tour life aground, and Duncan looked for a life that didn’t include chasing a little white ball around for a prize check.

That came at her alma mater, Byrd High School in Shreveport, where she has been coaching basketball and golf. This past year, Duncan coached both the boys’ and girls’ teams to the Louisiana High School Athletic Association state championships.

“I can promise you that I would not be the coach or person I am today without experiences and people that have been in my life,” Duncan said. “The kids that I coach are amazing and such a joy to be around; I couldn’t imagine doing anything else in my life.

Duncan, who won both the Diana Shore and Nancy Lopez awards for her college golf, is reflective on the many good times at LSU.

“My teammates over the years were not just girls I practiced with and went to tournaments with, but became some of my best friends and people I still talk to regularly today,” she said. “It’s funny when people ask me about my golf career at LSU, the actual golf part is not what I remember first.

“It’s the bumpy plane rides where we all held hands not knowing what the turbulence was. It’s the Halloween parties where we dressed up together. It’s the football games. It’s the nights crowding into a hotel room to watch the new episode of ‘Friends.’ It’s the cheap airport meals we shared. It’s the weddings and funerals we have all attended together.

“Those are the memories that make my days as an LSU golfer special. And because of those moments I believe we were a better team. We didn’t win any championships; we didn’t set any world records. But I wouldn’t trade a single minute of it!”