LSU Falls To Auburn On The Road 2-0 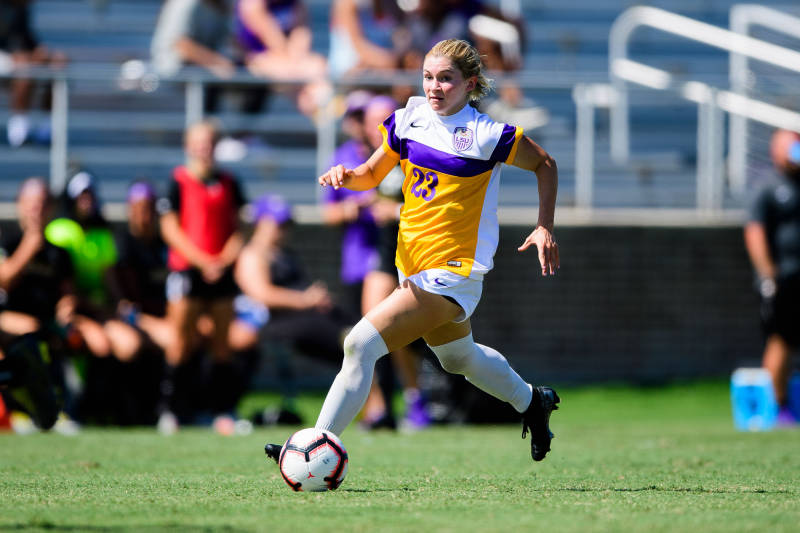 LSU played sound and energetic soccer for the full 90 minutes controlling possession for a large majority of the match. LSU registered a season high seven corners on the match and gave Auburn all that they could handle.

The first half saw LSU come out and control the tempo of the match with solid passing and great challenges on the back side. Auburn was able to break through with a goal in the 30th minute though after they took a free kick. Taking the free kick in the midst of the pitch from 30 yards out, they slid the ball out wide to the left and Alyssa Malonson made a move and sent a cross into the box. The ball grazed off the top of Shannon Cooke’s head on an attempted clearance and found the net on the far side. The goal was credited to Malonson with the assist going to Bri Folds.

LSU responded by collecting two more corners in the 39th and 40th minutes before Marlena Cutura narrowly equalized the match in the 41st minute. Her ball into the box from over 40 yards out caromed off the crossbar and the ensuing loose ball in the box was cleared away.

LSU came out of half attacking and collected three corners within the first 10 minutes of the second frame. All three times, Cutura played beautiful services into the box, but LSU couldn’t find the back of the net. The first one in the 52nd minute was initially headed by an Auburn defender before the loose ball trickled to Maddie Moreau. Moreau’s follow up shot was blocked by and Auburn defender, and then her second attempt that was headed towards the goal was stopped by the referee. The final of the three corner kicks to start the second half came after an LSU goal kick. Emma Grace Goldman bombed one deep and Cutura headed it towards the Auburn net to Meghan Johnson. Johnson possessed it for a touch and then sent a nicely played through ball for Maddie Moreau into the left side of the box. Moreau took a strike with her left foot and the curling shot towards the far post was deflected by Auburn’s goalkeeper (Kate Hart).

Makenzie Maher entered the match in the 62nd minute and she had a solid opportunity in the 64th minute to equalize the game. After an Auburn goal kick, Moreau came down with the ball and beat her defender down the left side of the pitch. She dished it over to Meghan Johnson, who was on her right. Johnson megged an Auburn defender and setup Maher for an opportunity from 10 yards out. It was Maher’s first shot of her career and Kate Hart, Auburn’s keeper, was up to the task.

Auburn’s final goal of the match came in the 78th minute of the match after LSU’s Molly Thompson was egregiously taken down inside the penalty box on the LSU attack. No whistle kept the play going and Auburn countered. Kori Locksley sent her shot from just inside of the LSU 18 to the low left corner to extend Auburn’s lead. Emma Grace Goldman made two saves in her 11th start of the season.

Up Next
LSU will have a week off before taking on Arkansas on Oct. 10 at 6 p.m. CT. The match will be in Baton Rouge and it will air on the SEC Network.