LSU's Man in the Middle Makes a Strong First Impression 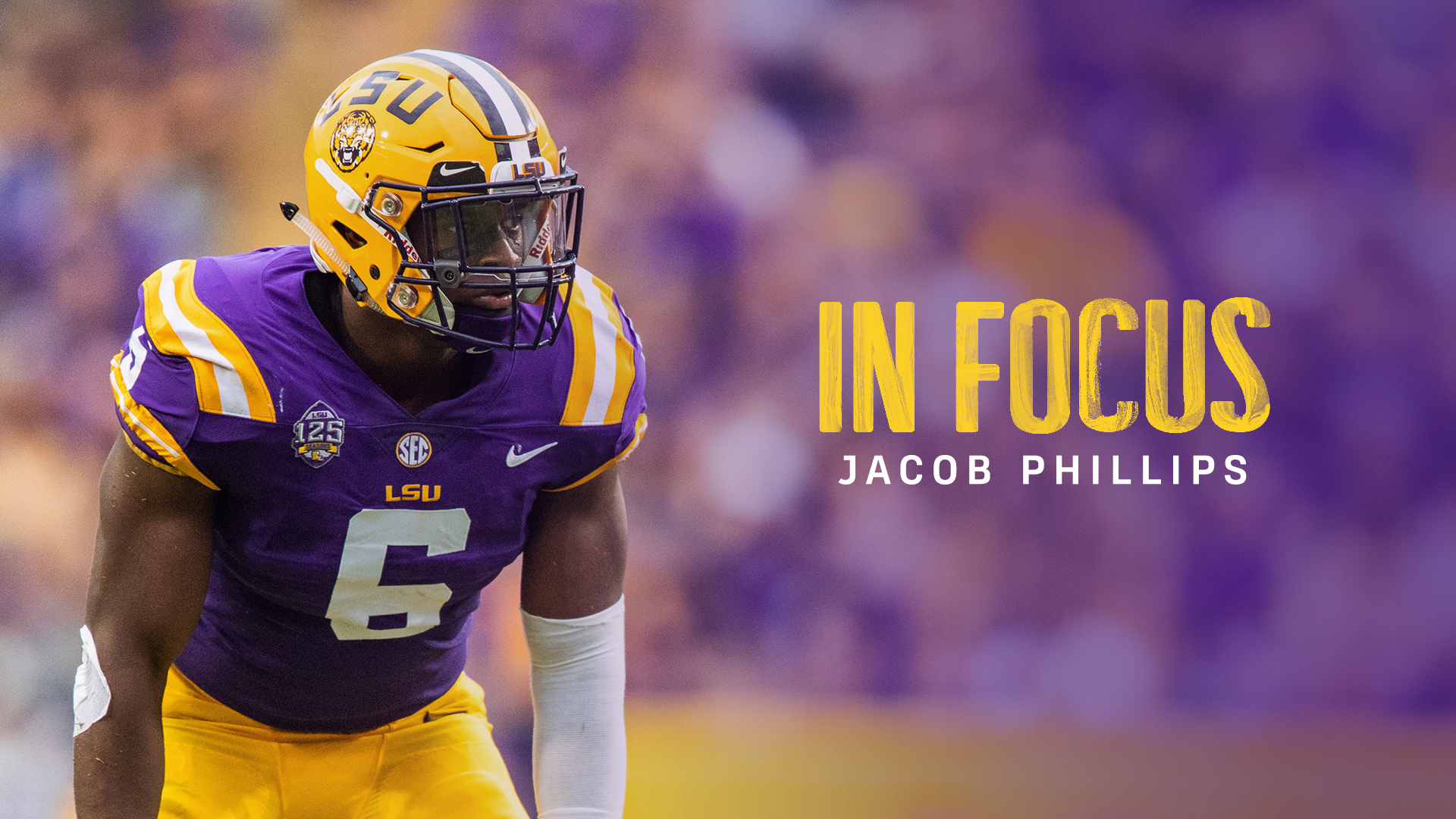 Just ask JaCoby Stevens, currently Phillips’ LSU teammate but once, not so long ago, his opponent.

Before the two were five-star signees out of the state of Tennessee with the Tigers’ 2017 recruiting class, they were rivals at Nashville-area prep schools, and they first crossed paths in a freshman scrimmage.

“I guess they were trying Jacob out on offense,” Stevens recalls, “and they were running some type of counter. I’m flowing, and I guess Jacob didn’t think I saw him, but he tried to get a crack back block on me. I backed up and he missed, and I just looked at him like, ‘Really?'”

Fortunately for Stevens, Phillips delivers blows more accurately on the defensive side of the ball, more adept at shedding blocks than setting them.

Fortunately for LSU, when Phillips lines a ball carrier up in his sights, he doesn’t miss.

Fast forward to just under halfway through their junior seasons, and Phillips has emerged as LSU’s man in the middle, a sure-tackling centerpiece of the Tigers’ defense who plays north-to-south, full speed, all the time.

Through four games, Phillips led both LSU and the SEC in tackles (35), and he’d missed on just one tackle attempt all season for the best tackling efficiency rate in the conference, regardless of his freshman ball forays on offense.

“Jacob has always been a workhorse,” Stevens says. “He is always going to go hard. He’s always going to try to outwork you, outwork his competitors. One thing about Jacob: he plays fast. He plays violent. When I’m out there on the field, I don’t have to worry about him being soft or second guessing himself.”

Perhaps no Tiger faced the pressure on defense Phillips did coming into this season. It comes with the territory when you take the reins from Devin White, the Butkus Award winner and No. 5 overall pick in the NFL Draft.

White was LSU’s all-action stopper a season ago, leading the team with 123 tackles and 12.5 for loss. Everywhere White wasn’t, though, Phillips was, tallying 87 tackles and 5.5 for loss.

So when White departed for the NFL, Phillips moved from Mac linebacker to White’s vacated Rover spot, with sights on replacing White in the lineup.

Phillips doesn’t see it as ‘replacing Devin White,’ though. He simply sees it as the next step in his career, the fulfilment of the potential he sees in himself.

He’s not following in White’s footsteps. He’s blazing his own path.

“It’s what you live for,” Phillips says, flashing his trademark ear-to-ear grin. “Coming to LSU, I’m blessed to be in the position that I am in. This is why you enjoy the game. This why you love sports. This is why you put in all the work that you do put in, so that you can reap the benefits of it.”

Phillips almost didn’t end up at LSU. He was an Oklahoma commit who didn’t have great interest in LSU – until he got on campus for an official visit.

Dave Aranda and Ed Orgeron sold him on the future, and Phillips found he shared their vision.

“I never really considered LSU until I first came down here,” Phillips says. “But talking with Coach O about the future and coach Aranda I felt like it the was the right place for me.”

“It’s all about the future. The coaches that we have here, I think they prepare us well and the culture around here is dominant. If you want to be in a position to be pushed every day, then this is the school for you.”

Part of the benefits of playing both middle linebacker positions is being postionally versatile and mentally developed. As much as LSU needs Phillips to step up and replace White’s production, the Tigers also need his presence as a play-caller and scheme-reader.

He’s the quarterback of the defense, and it’s a job he takes pride in.

“I stem on being able to be dependable on the run, but also be able to cover in the back end,” he says. “I want to take care of my job, and now this year with Devin leaving I’m talking. I’m calling the plays, calling the checks, things like that so it’s more what I like: being able to play both and lining everybody up.”

“Linebacker is all about fits and knowing where your help is, being able to communicate. It’s kind of like an opposite foot, but I think it’s nice that I know the things I knew at Mac and now the things I know at Rover. I kind of know more about the whole field.”

Phillips covered the whole field – and then some – in his return to Nashville. LSU’s trip to Vanderbilt on Sept. 21 was special for Phillips, who wrangled 36 tickets for the friends and family who wanted to see him play in his hometown.

He was worth the price of admission, racking up 10 tackles, including three for loss.

“At the beginning of the game, it was kind of slow,” he says. “I felt like the plays, the tackles, they weren’t really coming to me. I had goals of being in double digit tackles, two TFLs. I think I had three TFLs. So I was happy about that.

“It’s a huge blessing. I’m very thankful that I got to do that in front of my family, my friends and my home city, and in the first SEC game of the year, so I’m just real happy and thankful to come back.”

Goal-setting has been key for Phillips in his junior season. He writes down specific goals, including keeping the Butkus Award in Baton Rouge for another year. White may be gone, but be sure he checks in to see how his former teammates are faring.

“Writing my goals down, I’ve always kind of done that, but talking to Devin, he’s like a big brother,” Phillips says. “He hit me up before camp started and was like, ‘Hey, you want to tell me your goals?’ He wants to hold me accountable to the goals, and he told me his, and I’m going to hold him accountable.”

Perhaps no one can speak to Phillips’ development quite like Stevens. The two moved on from their first encounter to become close friends, training together throughout high school and ultimately landing at the same collegiate destination.

Stevens gushes about Phillips – his work ethic, his character, his IQ. Mostly, he gushes about his maturity, and he has evidence.

“Jacob, he just goes, man, and I’ve never seen anybody at his size fill and shoot gaps like he does, run sideline to sideline like he does. There’s a reason why he’s at the middle of the defense.”

With his size, speed, and smile, Phillips has always made an unforgettable first impression.

With his maturation, motor, and nose for the football, he’s now making a lasting one at LSU.