Soccer Set for Battle With Auburn on SEC Network 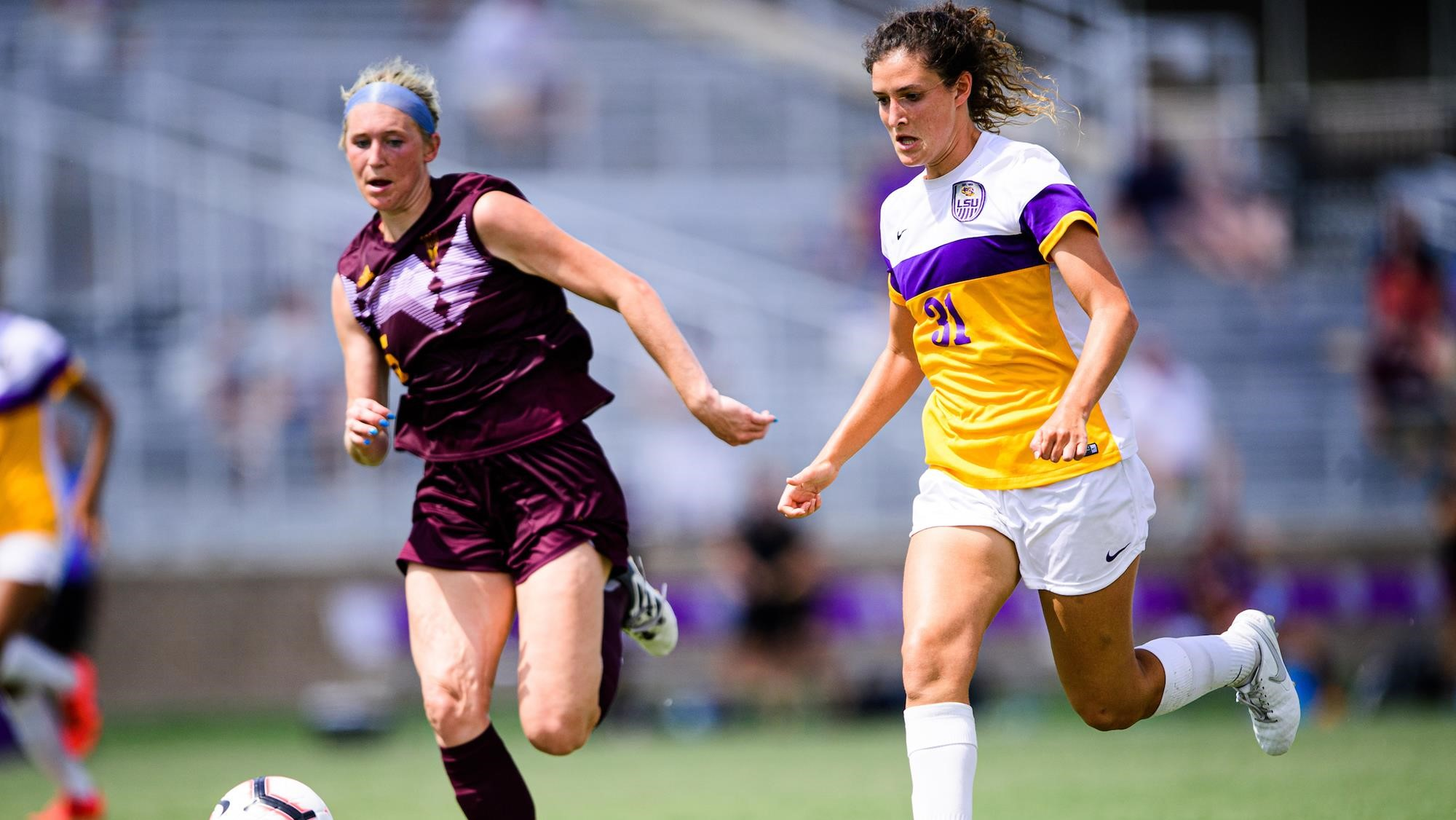 Baton Rouge, La. – The LSU soccer team (2-7-2, 0-2-1 SEC) will open the month of October with a game televised on the SEC Network against Auburn on Thursday night. First kick for the match is set for 6 p.m. CT in Auburn, Ala.

Auburn Scout
Auburn and LSU have played one common opponent during the 2019 season – Samford. Both teams, LSU (2-2) and Auburn (3-3), battled to draws with the Bulldogs. Auburn owns a record of 5-4-2 (2-1-0 SEC) and has gone to overtime in four of their last five contests. Ole Miss handed Auburn their first SEC loss of the season on Sunday with a 1-0 defeat in the first overtime session. Bri Folds is the offensive playmaker for Auburn with a team leading five goals and two assists for a team-high 12 points. Sydney Richards and Sarah Houchin both rank second on the team with two goals apiece. Kate Hart has manned the net for all 11 matches; she has 33 saves and has only given up 12 goals for a goals against average 1.03. Hart’s save percentage sits at .733.

Emma Grace Goldman
Goldman has been up to task this season in net for the Tigers consistently being challenged. Her 69 saves on the season lead the SEC and she is saving an SEC high 6.90 shots per match. She had one of the all-time great LSU performances in net against Georgia on Sept. 26 as LSU earned a 1-1 draw thanks in large part to her performance. She made 16 saves in that match, the second most in LSU single game history alongside Shelli Montevirgen’s 16 save match against Georgia in 1996. The 16 saves were one short of the LSU school record set by Bonnie Otillio in 1999 against Oklahoma. Goldman has started 10 matches for the Tigers and has a save percentage of .821 to rank fourth in the SEC; her 16 saves against Georgia are the most by any keeper in the league this season.

Last Time Out
LSU did battle with No. 14 Texas A&M and kept the Aggies scoreless for the first 67 minutes of the match before a pair of goals in the 67th and 72nd minutes gave Texas A&M the 2-0 lead for good. The Tigers are one of only four (out of a possible 11) teams to hold the Aggies to less than three goals in a match this season. In that match, Sydney Lau made her collegiate debut and made nine saves.

Tough Schedule
After Sunday’s match against Texas A&M, opponents that LSU have played this year own a combined record of 72-29-18 for winning clip of .684. Only five other teams in the NCAA have played a more difficult schedule to date. LSU’s final seven opponents that they have yet to play own a combined record of 45-24-9 (.635 winning percentage).

Moreau’s Magic
Looking like LSU was headed for its fifth-straight loss on Sept. 26, Maddie Moreau pulled one back for the Tigers with her first career goal in the 86th minute to equalize the match against Georgia. The play was created by senior Marlena Cutura who played a beautiful through ball in behind Georgia’s back line to lead Moreau into the left side of the 18. With Georgia’s keeper dashing at her, Moreau stayed composed and megged the keeper to score the goal. Moreau is LSU’s fifth player to score a goal this season.

Cutura Streak
With her assist in the 86th minute against Georgia on Sept. 26, senior Marlena Cutura continued an impressive streak. She has now scored a goal or registered an assist in 14 games during her career and LSU has yet to lose a single one of them. The Tigers are 11-0-3 all time when Cutura scores a goal or adds in an assist.

Fresh Faces
The Tigers have played as many as seven first-time players on the pitch at once this season. A total of 9 players have made their LSU debuts this season. Maddie Moreau is the lone first-year player to start all 11 matches. Rammie Noel (10 starts), Emma Grace Goldman (10 starts), Meghan Johnson (8 starts), Anna Rockett (6 starts), Maya Gordon (5 starts), Sydney Lau (1 start), and Maddison Martin (1 start) have all earned the first starts of their career this season as well. Hannah Cuneo (7 matches) and Makenzie Maher (7 matches) have all earned their first playing time for the Purple and Gold this season.