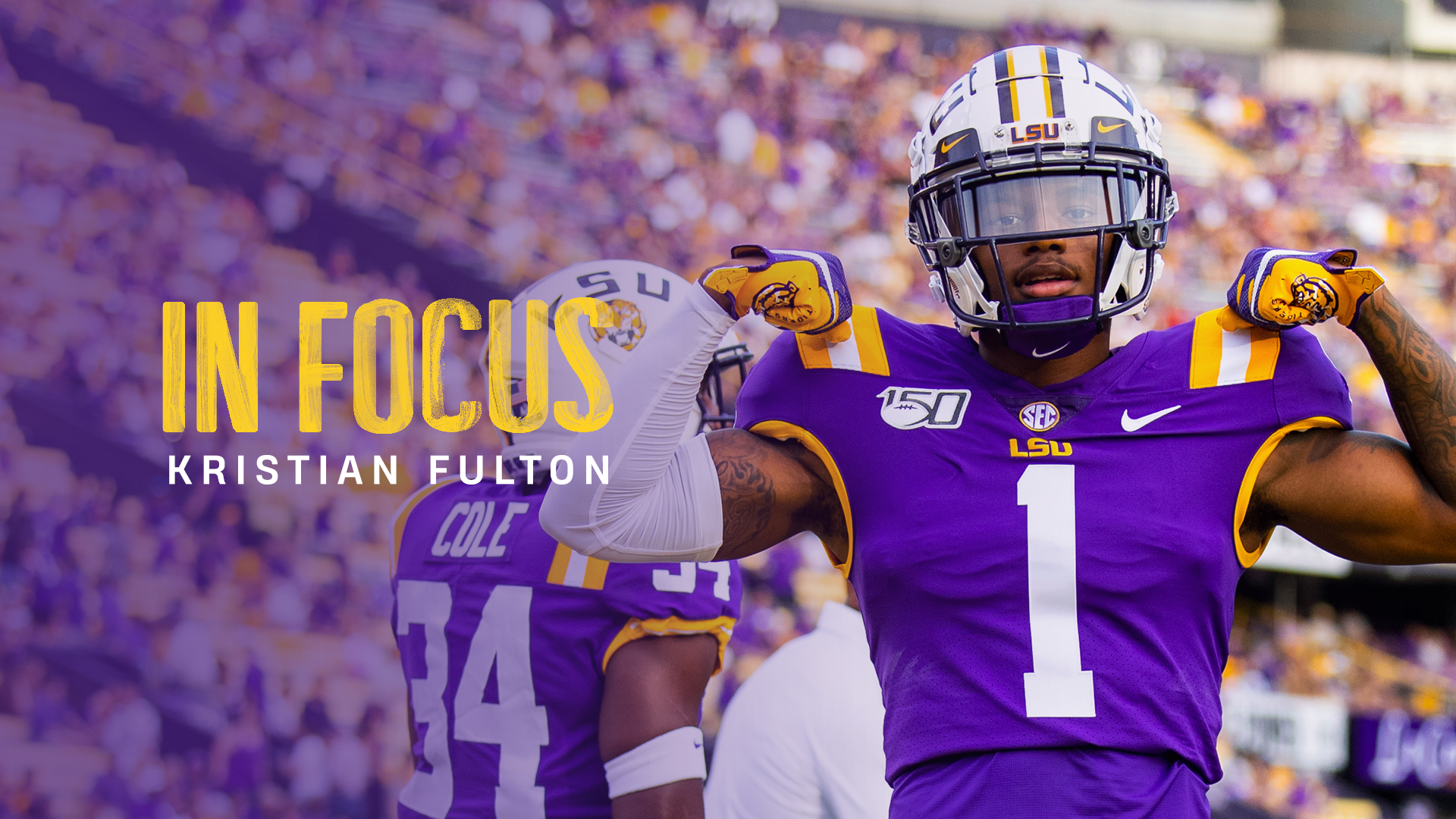 Gone is the youthful countenance Fulton possessed when arrived to LSU in 2016 looking like the youngest of a loaded class of defensive backs. The veterans called the youthfully-faced Fulton “K Baby,” and the title stuck.

But it needs a replacement, because Fulton is no longer the baby of the Tiger secondary. Far from it, in fact. He’s the lone vet in a group full of baby-faced freshmen, a lockdown cover man who’s overcome every obstacle and matured in spirit even more than he has in appearance.

It’s a position Tre’Davious White can relate to. When Fulton formed a three-headed cornerback class in 2016 with Saivion Smith and Greedy Williams, White was the resident senior, a proven SEC star who bypassed a shot at the NFL for a final year at LSU.

Fulton’s path was far different, but he’s reached a similar destination as White. Find Fulton’s name on the depth chart, and you’ll see he’s the only upperclassman in a position group otherwise filled with rookies.

“I kind of see how Tre’Davious White felt,” he says. “I feel like I’m in a similar situation as him. We had three or four young guys come in with my class, and he was the oldest.”

No one’s experience is quite like Fulton’s, whose rollercoaster career at LSU almost went off the rails before it even really got started. After seeing the field sparingly as a freshman, waiting his time and learning behind the likes of White, Donte Jackson, and Kevin Toliver, Fulton missed the 2018 season due to an NCAA suspension for attempting to cheat on a drug test. In a moment of panic, he tried to substitute another person’s urine sample for his own, a violation the NCAA initially ruled merited a two-year suspension.

LSU appealed, and Fulton waited. He came to grips with his mistake, and he learned from it. He matured, practicing every day as if he were first on the depth chart and cleaning up his act off the field.

His mantra was simple: Just get better. His hope was his anchor: You’re going to be on the field one day.

That day came a year sooner than he expected. Just four days after a failed appeal, Fulton got cleared by the NCAA to play in 2018. He went straight into the Tiger secondary, and he did not disappoint, teaming up with Williams to form one of the nation’s top corner tandems.

A year ago today I got my biggest blessing to put me where I’m at today! It’s still unreal im in this position! God is great ???? Still wan thank everybody who played a part..

Fulton showed no signs of rust from his season away. Opponents completed just 41.5 percent of passes they threw at Fulton last season, and he graded out as the SEC’s second-best corner behind 2019 first round pick DeAndre Baker. If not for an injury picked up late in the 2018 season against Arkansas, Fulton himself could’ve very well been an NFL draft pick.

But he knows better than most that no journey follows a straight line, and everything happens for a reason.

“Some guys are three and out, some guys do four years,” he says. “My situation was kind of different. I came in with a stacked secondary, so I didn’t get to play hardly at all my freshman year. And it was tough when the suspension happened. I was like, ‘I’m only going to get to play one year at the school I want to play at.’

“Knowing I got that year back, and now getting this second year, I feel like I get to make a name for myself this year.”

Now, he has a new number – he’s back wearing No. 1, the number he’d sported since little league – and a new role as the mentor of another talented crop of young corners. He’s taken Derek Stingley, Cordale Flott, Jay Ward, and Raydarious Jones under his wing, the way White did with him in 2016.

In other words, Fulton’s not just making a name for himself. He’s helping others make their own marks, too.

K-Baby’s all grown up, and he’s got plenty of wisdom to pass down.

“I’m just taking what I have experienced since I was a freshman to give it to them,” he says. “Where I was then and where I am now, I’m blessed to be in the position I’m in now. I just want to take my opportunity that I’ve got and run with it, make the most of it.”