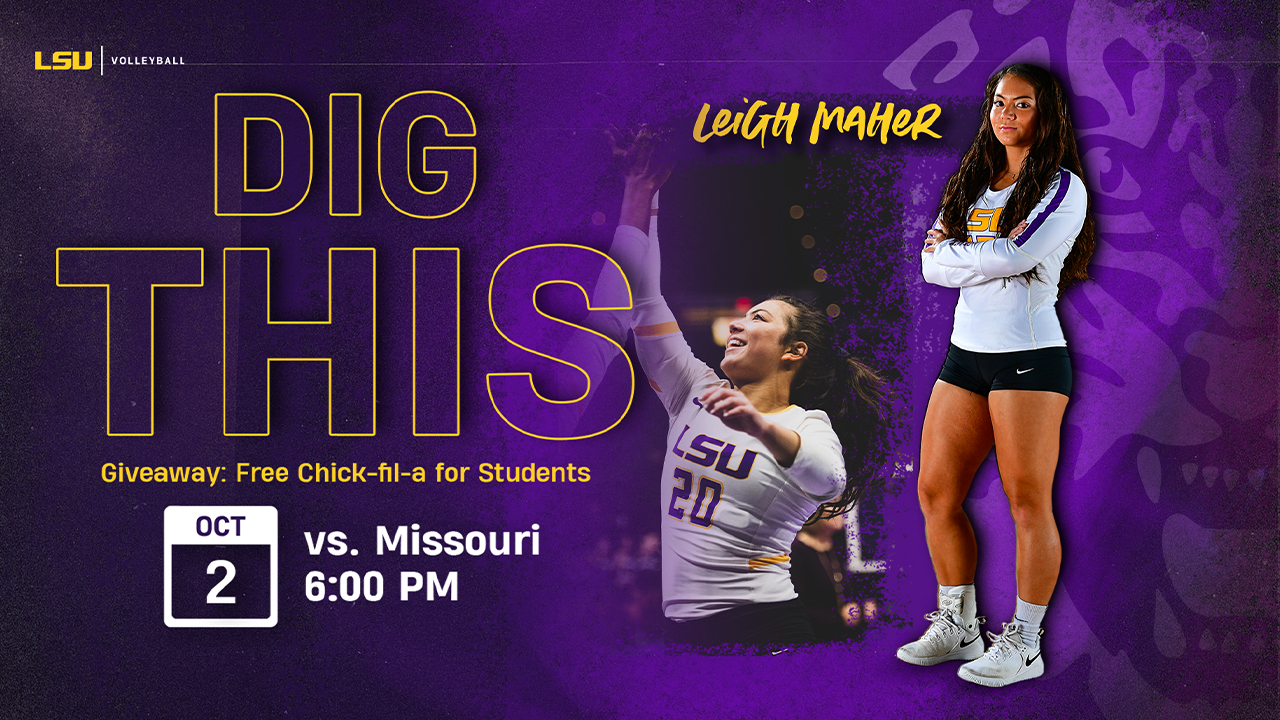 BATON ROUGE – After two sweeps last week, the LSU volleyball team (8-4, 2-0 SEC) will look to continue the moment as the Tigers play host to No. 22 Missouri (8-3, 0-1 SEC) Wednesday at 6 p.m. inside the Pete Maravich Assembly Center.

The match will air on ESPNU with Tiffany Greene and Missy Whittemore calling the action. Live stats will also be available.

The Tigers are coming two sweeps to open up SEC action. They defeated Arkansas at home last Wednesday in three sets and went on the road Sunday to down Mississippi State in straight-set fashion. Missouri suffered a 3-0 loss to No. 15 Kentucky to open SEC play.

Series History
– vs. Missouri: The Tigers are 4-9 against Missouri all-time, falling in the last six meetings. The last time the Tigers took down Missouri was in 2014 inside the PMAC in four sets.

Team Notes
>> The last time LSU defeated a ranked opponent was in 2014 when the Tigers down No. 12 Kentucky in five sets.

>> Head coach Fran Flory, the winningest coach in LSU volleyball history, enters her 22nd. She owns an all-time record of 486-380.

>> Taylor Bannister has a total of 971 career kills and is 29 away from reaching 1,000 after tallying 154 kills thus far this season. Last weekend, she tallied 29 kills, recording 15 against Arkansas and 14 against Mississippi State.

>> Raigen Cianciulli, the fastest player to reach 1,000 digs in program history, has a total of 174 digs through the first 12 matches, recording 4.05 digs per set.

>> Senior Milan Stokes stepped up big for the Tigers in their first SEC match of the year against Arkansas, tallying a season-high 13 kills.

>> Samarah Hill and Karli Rose continue to make an impact. Rose picked up her fourth double-double of the year against Southern Miss.

>> Rose picked up SEC Freshman of the Week, her first weekly honor as a Tiger. She helped the Tigers to two sweeps and a .313 hitting percentage last week. She tallied 76 assists to go along with 13 digs, six kills and two blocks.

>> Anita Anwusi played a big match against Mississippi State, tallying a career-high eight kills and a .700 hitting percentage. She is second in the league in blocks per set at 1.32.

>> The Tigers have hit over .300 in five matches this season, with a season-high of a .365 mark against Southern Miss last Friday.

>> Among the league, LSU is tied for first in opponent hitting percentage, holding their opponents to a .154 mark. The Tigers are also second in blocks behind Florida, averaging 2.56 per set.