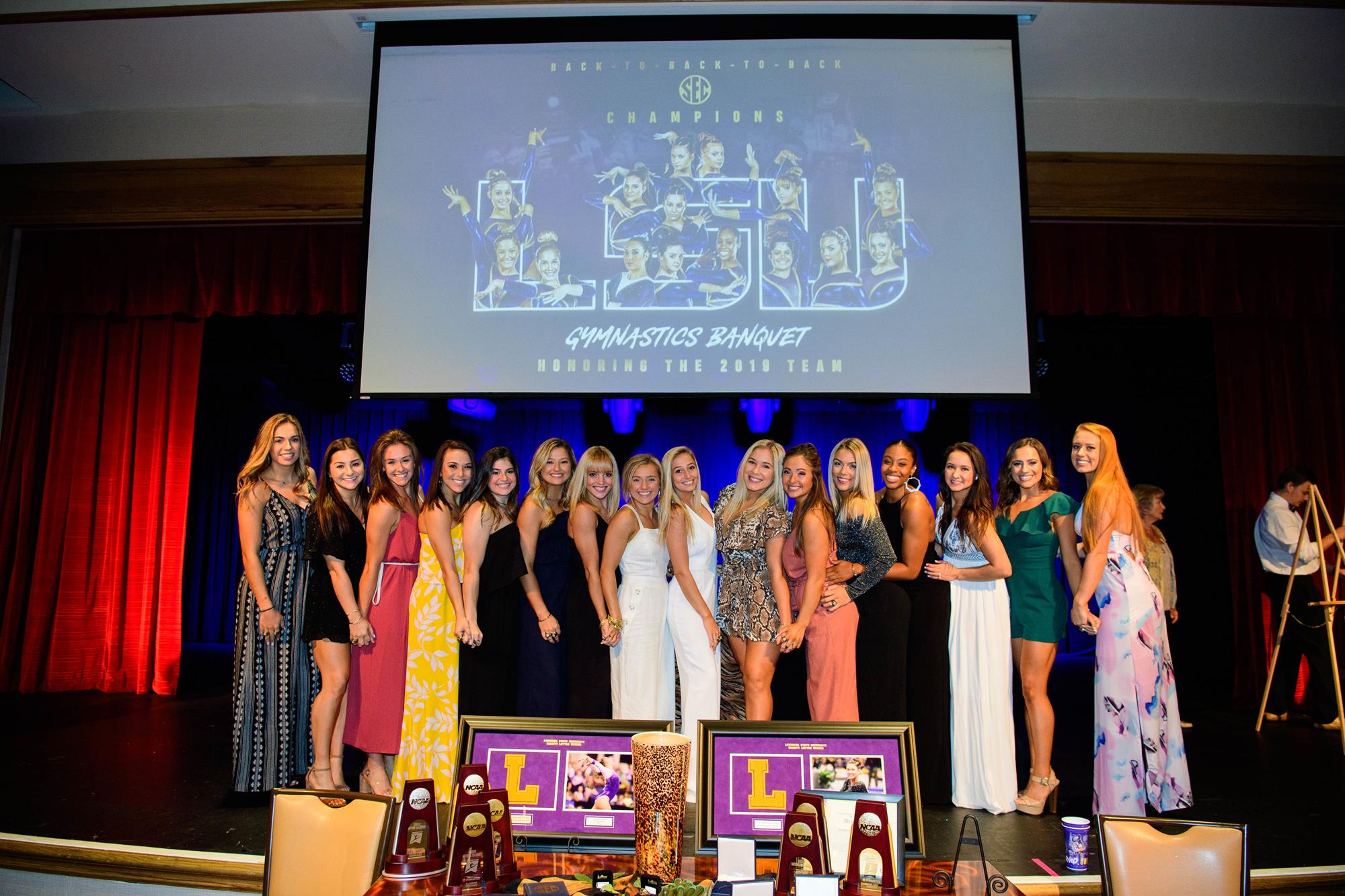 BATON ROUGE – The LSU gymnastics team and staff, friends, family and boosters celebrated the 2019 season at L’Auberge Even Center Sunday.

Co-head coaches D-D Breaux and Jay Clark, assistant coach Bob Moore and volunteer assistant Ashleigh Clare-Kearney presented awards to the gymnastics for their achievement in the classroom, competition arena and in the community.

The banquet began with recognition of letter winners and presentation of the seven newcomers for the 2020 season. Julianna Cannamela, Sarah Finnegan, McKenna Kelley and Lexie Priessman were recognized for their accomplishments in the gym. The group left LSU with their degrees and led the squad to the most accomplished four years in program history.

Breaux presented Finnegan and Ruby Harrold as the L-Club Captains for the 2019 season. The All-Americans were awarded as individuals that demonstrated leadership and a commitment to team excellence.

Priessman was recognized for her commitment to the community with more than 90 individual hours logged. She was named to the SEC Community Service team.

For owning a GPA of 3.0 or higher for the academic year, Cannamela, Christina Desiderio, Sami Durante, Finnegan, Olivia Gunter, Harrold, Kelley and Ashlyn Kirby were named to the SEC Academic Honor Roll. Rebecca D’Antonio was also named to the SEC First-Year Honor Roll.

D’Antonio, Gunter, Kirby and Gracen Standley were recognized as NACGC Academic All-Americans for finishing the academic year with a 3.5 GPA or higher.

Priessman was presented with the T.I.G.E.R. Award for her athletic performance. The acronym is Train, Initiative, Goal Setter, Enthusiastic, Rise to the Occasion and Selfless.

Dee-Dee Fulmer was an advocate for women’s athletics at LSU and a fervent supporter of the program. The award, which is in its 21st year, honors a gymnast who demonstrates a strong commitment and athletic excellence. Cannamela was honored with the award, which represents Fulmer’s spirit, drive and enthusiasm.

Finnegan and Priessman were honored for their All-SEC performances. Finnegan was also recognized for her Southeastern Conference all-around title and Gymnast of the Year award.

To close out the afternoon, the team and staff was presented with SEC Championship and NCAA Super Six appearance rings.

The season ticket request list is available at LSUtix.net. In 2020, LSU will host meets against Arizona, Auburn, Alabama, Arkansas, Kentucky and Arizona State.