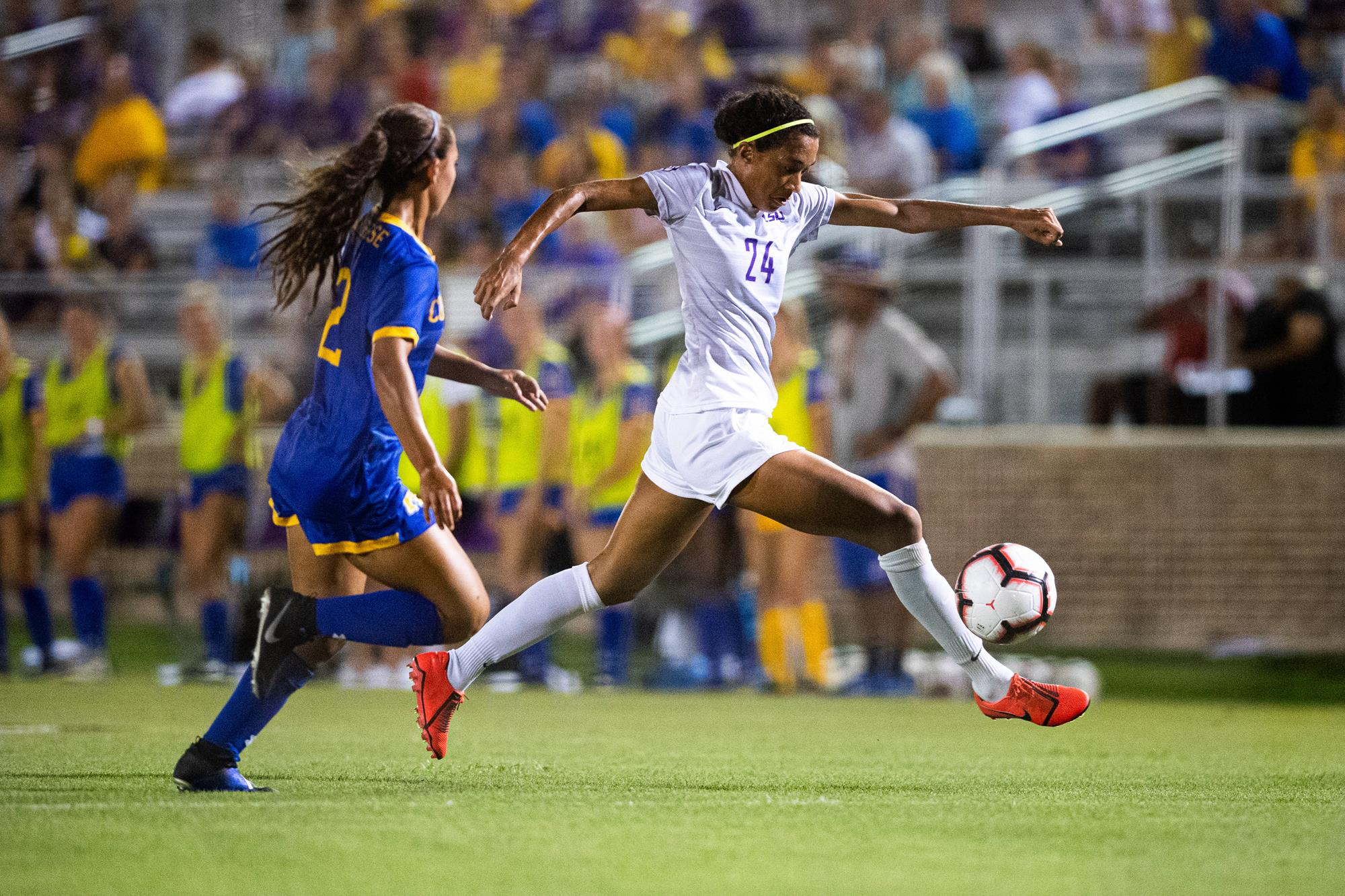 Jade Clarke walks out of the locker room.

Practice starts in an hour, but the senior is already there. Long before the team is expected to arrive for the start of practice, Clarke has already worked up a sweat. A combination of early work and treatment that leads to Clarke being in the best shape possible to help the team succeed.

The goal is simple, as SEC play takes off in full force, the Tigers want to find their rhythm and put a dent in conference play. Coming off a year where the Purple and Gold took home the conference crown, Clarke knows what it will take to get back to that level of play.

“It’s just continuing to work hard,” said Clarke. “It would be easy to say it’s just not meant to be this year. However, that’s not the thought process of this team. This team wants to win. This team knows how to win. Every day we come to practice with the mindset that the next game could be the one to jump start a winning streak. We saw last year that anything can happen in this game.”

Clarke came to Baton Rouge in 2016 from Richmond, British Columbia, Canada to play for the Tigers. Her sister, Summer, was a senior on that year’s squad.

Summer Clarke will forever be remembered as one of the greatest players in LSU soccer history. She was the sixth Tiger to be named an All-SEC player three times in a career that featured 27 goals and 15 assists for a total of 69 points, placing her in the Top-10 in every category. Having started all 77 matches in her career, Summer definitely left her mark on this program.

One thing Clarke was worried about, was getting out of the shadow of her older sister. Very early on though, Clarke figured out that she was her own player and wanted to leave her own legacy on this program.

“At first, I was a little nervous that people would compare me to Summer,” Clarke said. “That wasn’t the case at all. My parents always reminded me that we are different players and different people. Even with my teammates, no one ever put that pressure on me to try and live up to what Summer accomplished here. I never felt like I had to be anybody but myself which is why my time here at LSU has been so gratifying.”

Fast forward four years. Jade Clarke is now a senior. One of seven seniors tasked with leading a team that features eight true freshmen. A role Clarke never thought she would find herself in, but embraces one-hundred percent.

“I’ve never really seen or thought of myself as a leader so it’s been a little tough stepping into that spot. I know I am not really a vocal leader so I am really focused on carrying myself in what I do on and off the field in a way that sets a good example for the youth on this team. I have really just focused on having a good attitude whether I’m on the field or on the bench. I always want to put the team’s best interest first.”

Clarke wants to make sure that her teammates are staying focused on improving and trying to win as many games as they can. Even with early challenges, Clarke knows there is nothing you can do but move forward and continue working.

“I think it is just important to make sure everyone is focused on the amount of soccer we have left to play this season. We are still very much in the mindset that we can win games and get where we want to be, back in the postseason.”

Eight games remain in the regular season for the Tigers giving them plenty of time to be remembered how they want to be remembered – as a team that never gave up and continued to fight. On an individual level, Clarke hopes that what she has done in her time here in Baton Rouge is enough to leave a lasting impact.

“I hope I have made a name for myself. I know I have given it all I have for the four years I have been here. I also know this; I love wearing LSU across my chest.”

As the interview wraps up and Clarke stands up to go back to the locker room to get ready for an early afternoon practice in the Baton Rouge heat, she stops and says:

“There is no better decision I have made in my life then coming to play soccer at the greatest university in the world.”